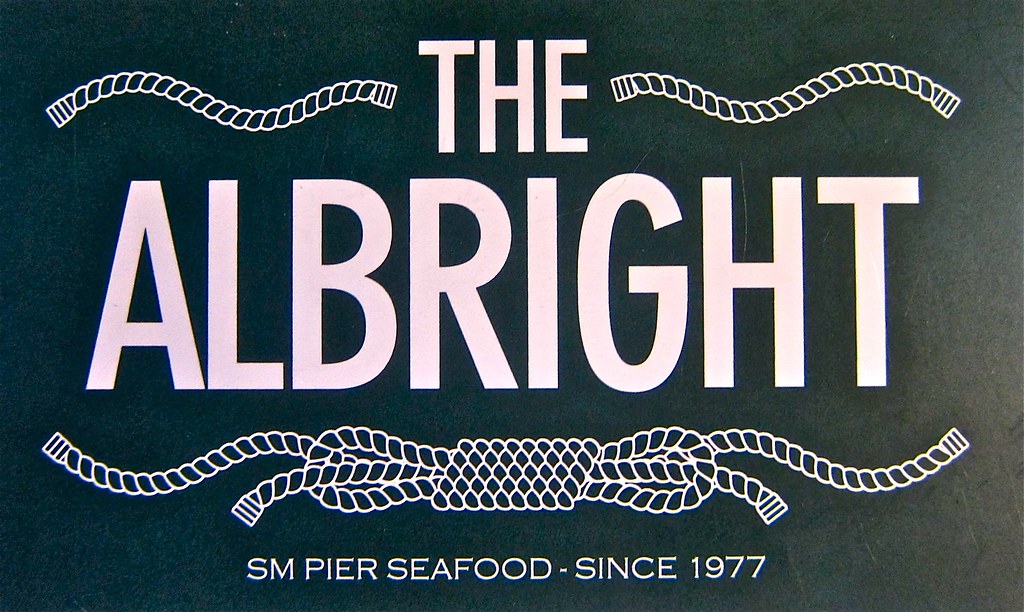 The very first thing I did when I moved permanently to Los Angeles in 1973 was to visit the Santa Monica Pier. I had just seen the wonderful film, The Sting, directed by my friend George Roy Hill, which starred Paul Newman and Robert Redford. While the movie was set in Chicago, they had filmed the carousel scene at the Pier, which is located at the foot of Colorado Avenue in Santa Monica. This carousel in the Hippodrome Building is a magnificent artifact, built in 1922 and revamped completely in 1990, it features 44 hand-carved horses which kids of all ages ride while accompanied by the calliope music. A 100-year-old landmark, this Pier was destined to play an important role in my future life in L.A. When I produced the film, W. C. Fields & Me at Universal, we filmed a key scene on the Pier at twilight.... where Fields, played by Rod Steiger, bids a tearful farewell to his midget friend played by Billy Barty. When I co-produced a Lifetime cable movie, Invisible Child, a key scene with Rita Wilson was filmed on the ferris wheel there (while her husband, Tom Hanks, stood and watched on the sidelines.) And every October I volunteer in an event for Special Olympics called "Pier de Sol" where I help get 38 restaurants to participate in the charity event to benefit special-needs children. I have often visited the Pier in summertime to view an outdoor movie there. I have taken several first dates to the Pier to sit at the end of it and romantically drink wine while gazing out to sea. I even ate shrimp at the so-so Bubba Gump place there, owned by the same people who produced that film which was partially shot there. I have extensively reviewed The Lobster at the entrance to the Pier, once commenting that the then-chef was allergic to lobsters. Recently I reviewed on the Huffington Post two restaurants adjacent to the Pier, Blue Plate Taco and Water Grill. Yesterday I visited my kid brother Stan who has just moved here from France and is living on Ocean Avenue in an apartment overlooking the Pier. Yes, the Pier has played a nice role in my California life... and continues to do so. 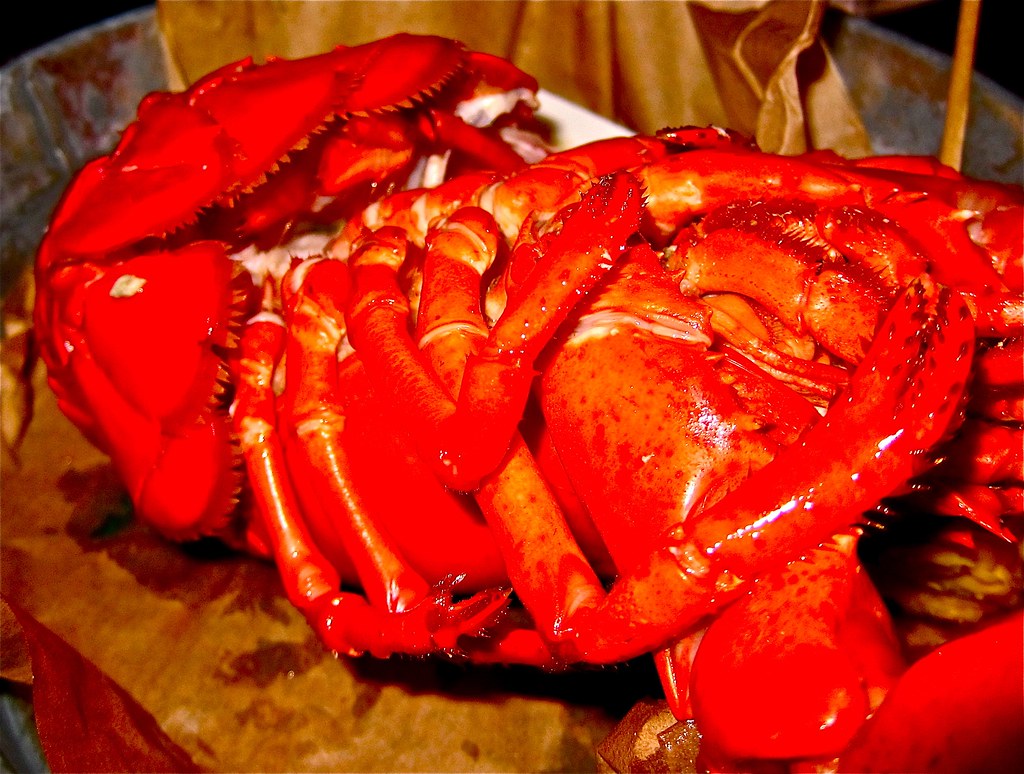 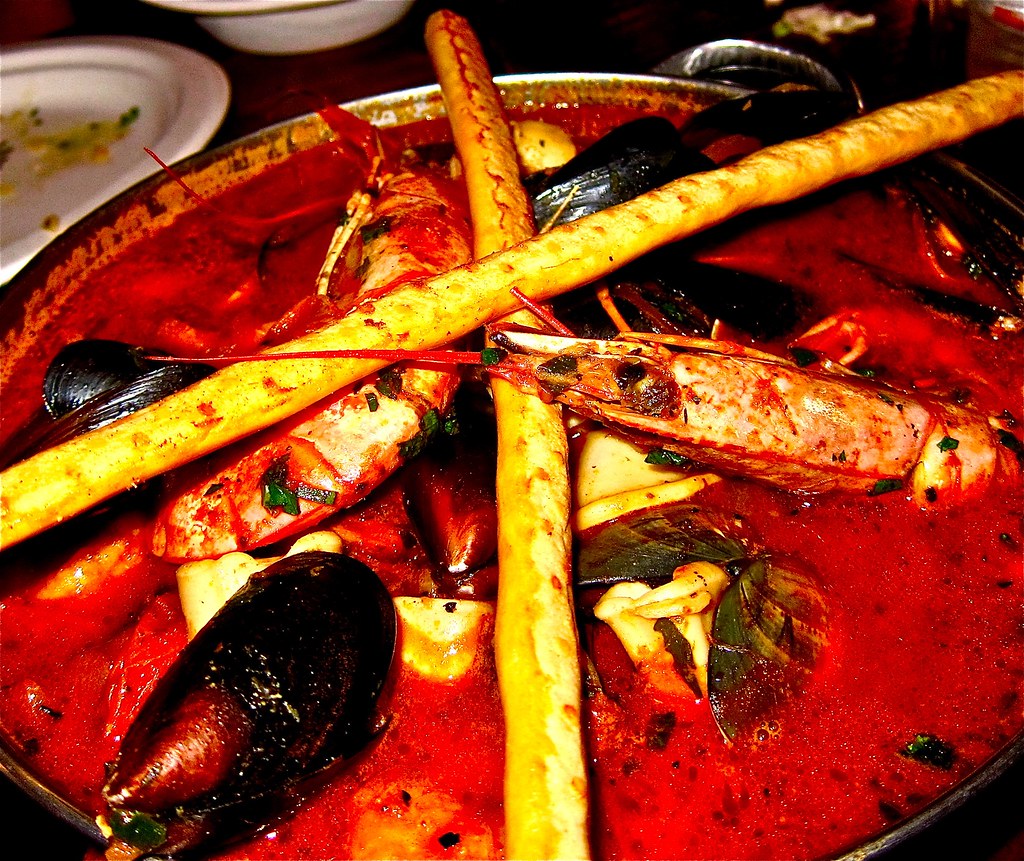 So when a friend told me about a wonderful new seafood restaurant at the Pier, I immediately gathered my reviewing troops and made plans to invade this new seafood shack. Only it was not really a new place but rather a revamped version of a long-time seafood eatery there. Wonderful story: In 1977 two young Korean immigrants, Hae Ju Kim and her husband, arrived here with almost no money, but somehow they managed to lease a place at the Pier and called it SM Pier Seafood. For some 35 years they ran it night and day, catering to the hordes of tourists who flock here every summer. This year, they agreed to turn it over to their 32-year-old daughter, Yunnie Kim Morena, who took over the business after successfully operating Fred Segal Couture for over 10 years. Yunnie and her husband, Greg Morena, who serves as President of the restaurant's management team, then instituted a compete revamp of the place which is situated right next to the Pier's parking lot. "We modernized and streamlined the look while preserving the restaurant's original atmosphere and character. I grew up in Santa Monica and this restaurant was a big part of my life," she told me.

We asked our friend, architect David Alvarez of Studio Alvarez, to assist, and our clean, white-tiled interior is now accented by pops of turquoise complementing the wooden communal table-and-bench seating. The exterior space is sheltered with strings of lights creating a warms seaside setting.

I asked her why the name? Was it named for our former Secretary of State Madeleine Albright, and she laughed and said "no," it was named for The Albright, the well-known (but not to me) nautical knot, symbolizing the tying together of two paths, two generations. Family friend Bobby Hundreds drew the design of it. It is located at #258 on the Santa Monica Pier (310) 394-9683. 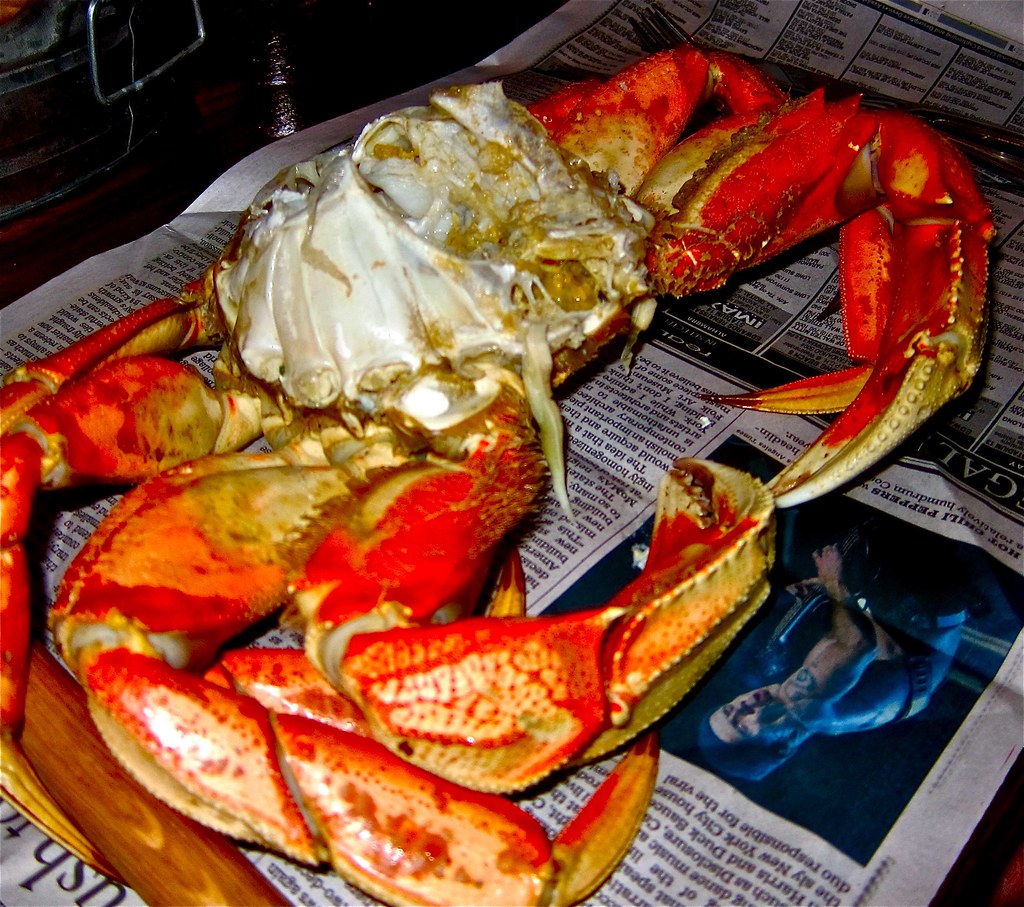 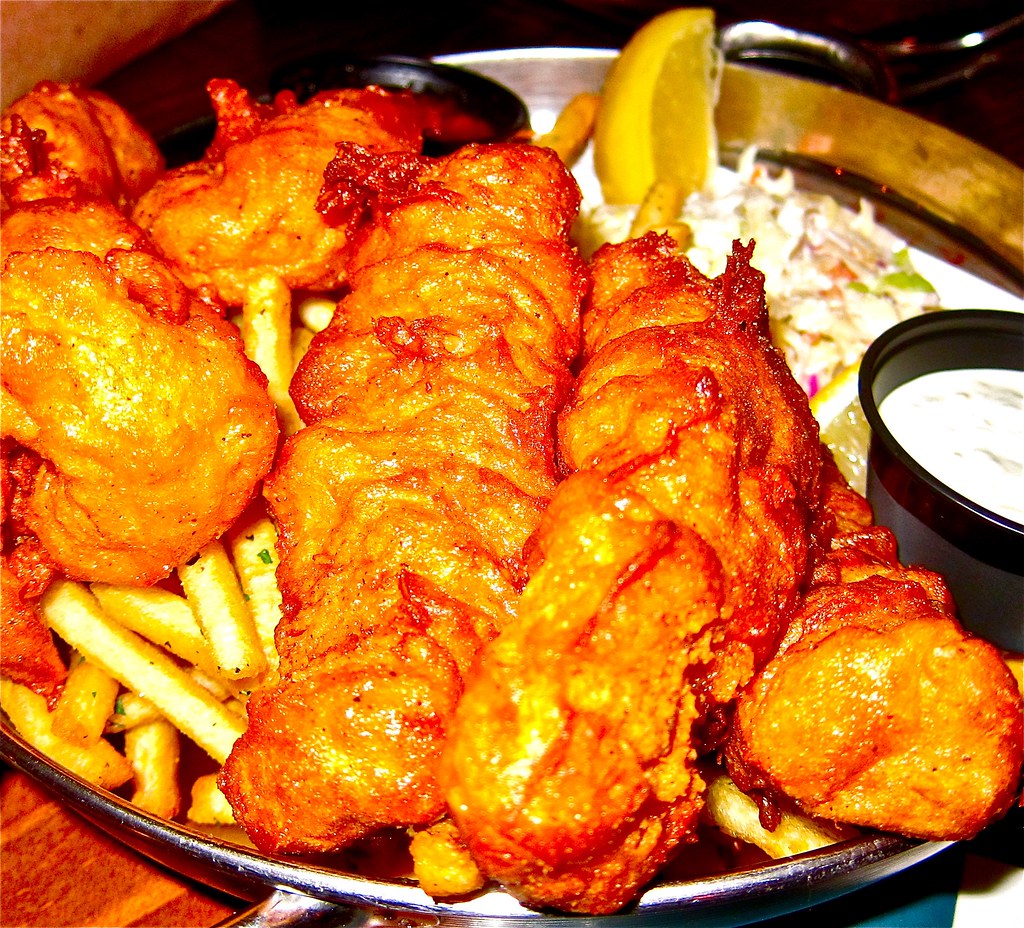 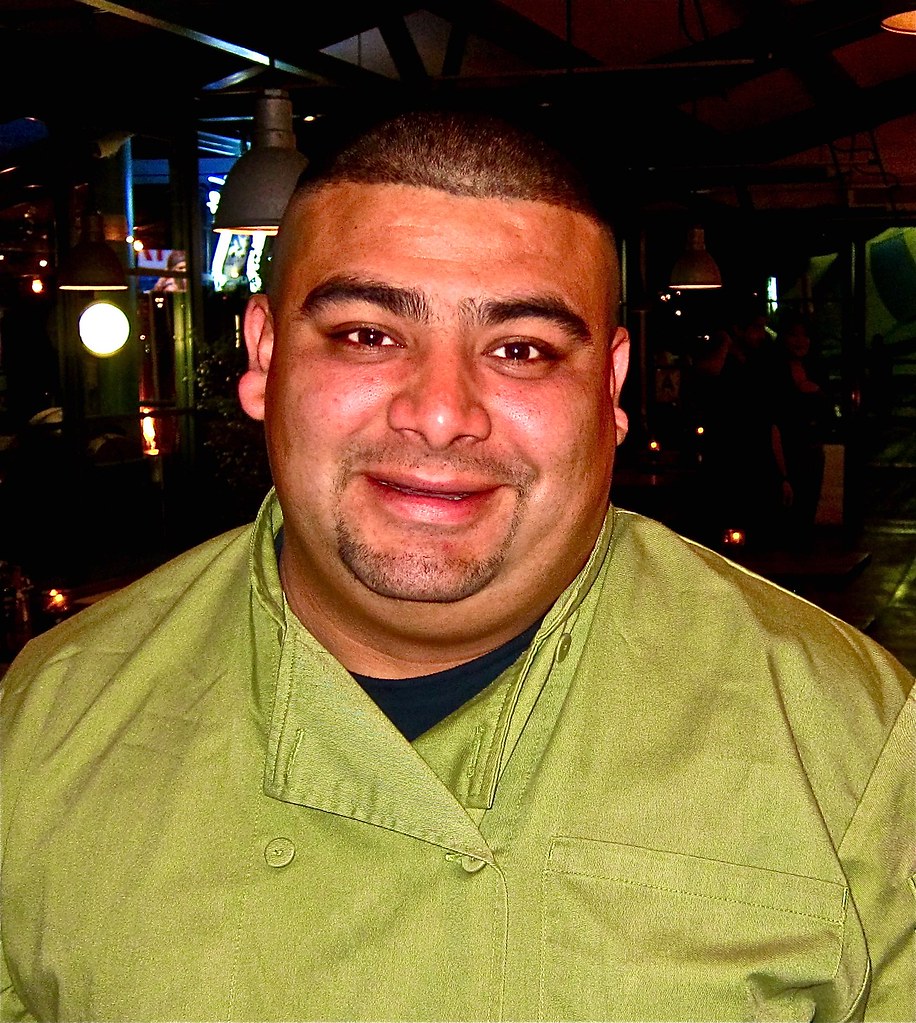 But most important to me and visitors is that the menu has undergone a complete revamp, reflecting their commitment to using fresh, locally-sourced food while adding a craft beer and California wine program. When we arrived there for dinner last week, I was greeted by an old friend, Vince Zangari, who is the general manager. We had first met when he ran Le Colonial some years ago. He then introduced me to the young chef, Francesco, and I was startled to learn that he had worked at Spago under the tutelage of my buddy, Lee Hefter, Wolfgang's partner. A Spago guy at the helm of the kitchen meant a different perspective... and it turned out to be a remarkable one. That night my three associates, Penny McTaggart, David Rapoport and Jill Kossow, and I enjoyed one of the best seafood dinners we have had in years! Yes, you heard me... here on the Santa Monica Pier we had a meal which excelled when measured against Providence, Connie & Ted, and even The Water Grill down the block. 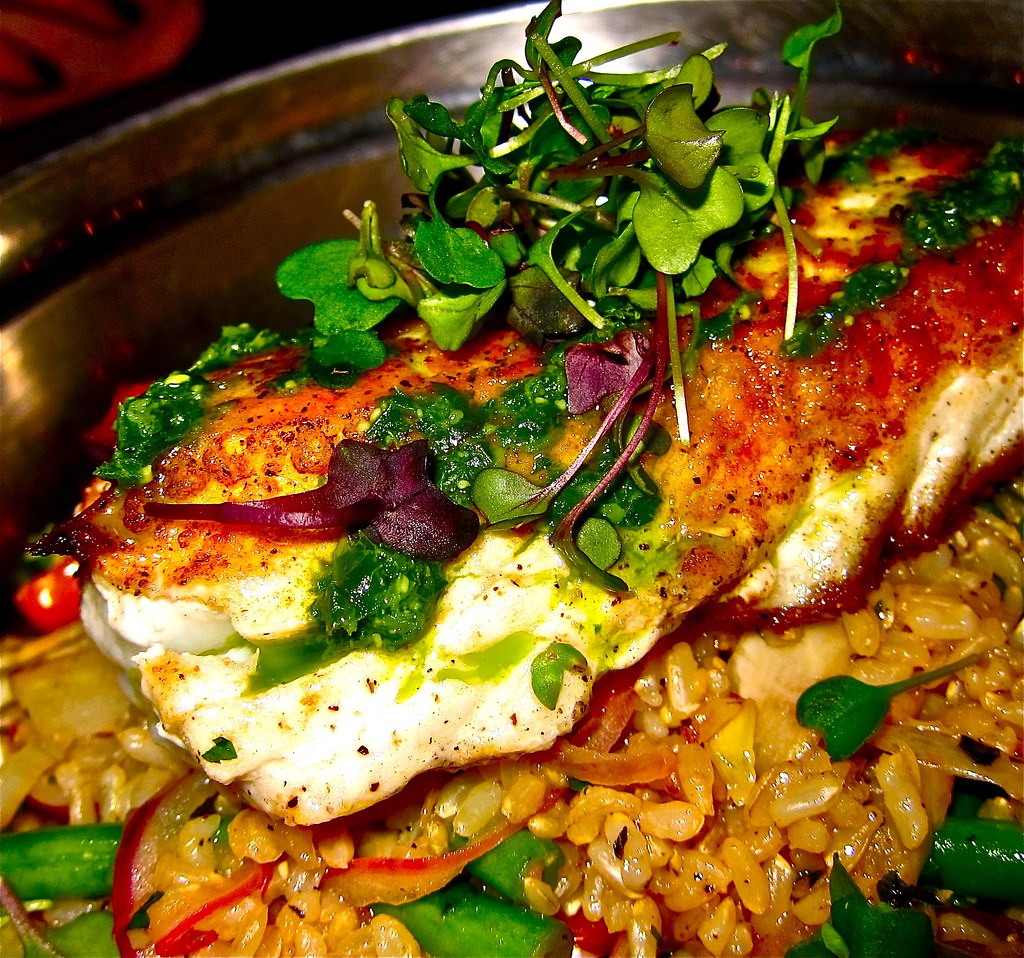 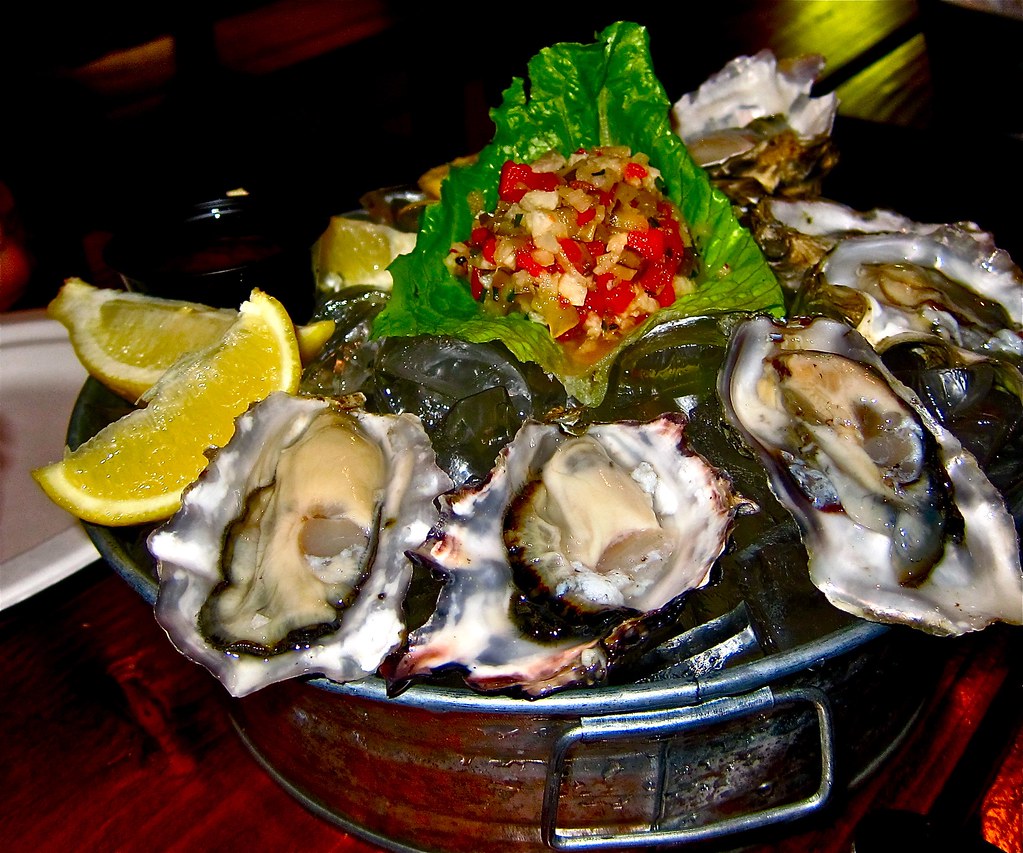 Fresh oysters from East and West Coast. photo by Jay

What they've done is focus the menu on classic seafood items you would expect to find on the Pier. We began our meal with each of us enjoying a half-dozen of Fannybay ($15) and Kumamoto Oysters ($19). They were accompanied by champagne mignonette and spicy relish, but when they're this fresh only a spray of lemon is needed. Next up were two soups, both a revelation. The New England Clam Chowder ($7.50 for a cup, $9.50 for a sourdough bread bowl of it), was rich and creamy, full of clams. The came a highlight of the evening, Spicy Seafood Soup ($25.75), a huge bowl chock full of clams, mussels, cod, langoustines, squid and crab, on a bed of jasmine rice. I must say that this dish alone would have satisfied me for dinner (and I took home a container for next day's lunch.) World-traveler Jill said that the spicy red broth was the equal of any she had in Italy or France. Fragrant with saffron, it was a huge winner. We had admired the bubbling saltwater tank filled with lobsters, crabs and prawns sitting beside the kitchen, and the chef smiled when he fished in it for our next course. My readers know that I am nuts for lobster, and very particular how it is prepared. (Don't like it grilled as it gets too dry.) Here the pound and a quarter Maine crustacean ($39.95) had been gently boiled for about eight minutes in salted water, then served with a cup of drawn butter. Vince had prepared our table with sheets of the L.A. Times and a few wooden mallets, and we used them also on the huge Dungeness Crab ($39.95) that emerged from the kitchen. David cracked away and commented that it reminded him of the Maryland crab places he had frequented as a kid. I was a happy camper as I gorged on chunks of savory lobster and cracked open the crab for the morsels of meat in the claws.

Were we done? Not by a long shot. After all, every seafood shack has to offer Fish and Chips ($13.25), here hand-battered Icelandic cod served with French fries and coleslaw. The cod was crispy and fresh-tasting, while the freshly-made fries made McDonald's seem redundant. A few samples of Shrimp and Chips ($17.25) emerged, equally delicious. I didn't want to try the Mussels and Fries ($15.75) 'til next time. I also passed on the Seafood Linguini ($22.75) 'cause of my gluten-free diet, but I sure was tempted. There was also a Whole Fried Tilapia ($21.75) for next time. I asked whether they could buy fish from the guys who fish off the Pier every day, and was told that they can only buy from licensed seafood providers who fish there. They do offer Seared Salmon ($21.50) and Seared Halibut ($25.95), served with brown rice, plum tomatoes, summer beans with arugula pesto. This is gourmet fare with the smell of the sea wafting into your nostrils.

There is lots more on the menu which we didn't sample this night... a huge Angus Burger ($11.95) as well as a Pier Club with Salmon ($15.95) and my long-time favorite, a Tuna Melt ($10.95). Vince told us that the Beer-Battered Fish Tacos ($13.25) were a big favorite with the tourists who flock here in summer. "In season we have people lined up at our door from early morning to late at night," he told me. I learned that locals are now beginning to realize the gem on the Pier and coming here more and more. One of the big draws is the Albright's Beer List, an astonishing sample of 50 craft beers and ales. David and I sampled several and delighted in the Goose Island IPA ($6/11) on tap. The Wine List is not that extensive but does have some sparkly choices, including a bottle of Wycliff Brut from California for $15. I recommend the Fresh Fruit Sangria ($9) an iced red wine version.

The Albright is open Monday through Friday from 12 noon to close; Saturday and Sunday 11 am to close. Inexpensive parking on the Pier is right next to the restaurant and there are several adjacent lots. Reservations are not necessary and they have an event space and catering program available at (310) 394-9683.

As I said, the Santa Monica Pier is an integral part of my Los Angeles life, and I welcome this exciting new culinary addition to the mix. Smell the sea air and enjoy the delicious food.

To subscribe to Jay Weston's Restaurant Newsletter ($70 for 12 monthly issues) email him at jayweston@sbcglobal.net.