After the town of Denton, Texas passed 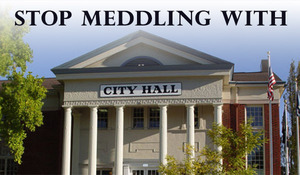 a ballot initiative banning fracking in November 2014, the oil and gas industry reacted with outrage and swiftly filed suit. Politicians in the state capitol responded with a fusillade of bills to preempt local authority over public health and safety and to subject local ballot initiatives to pre-approval by the state attorney general. There was even a bill to end local home rule altogether.

The tiny town of Denton was not alone. From New Jersey to Oregon, on topics as diverse as minimum wage, paid sick leave, community broadband, e-cigarettes, and GMOs, state politicians are stepping up their efforts to destroy a bedrock principle of U.S. governance -- the right of municipal and county authorities to legally and appropriately enact and strengthen laws that reflect local needs and priorities.

Corporate interests that spend hundreds of millions a year on state and federal lobbying have grown accustomed to getting what they want at the federal and state levels, but it is much harder to assert corporate control over America's 22,553 municipal and county governments.

Preemption is part of a one-two punch corporations and politicians are using to block the advance of progressive policies at the local level, where these policies are most likely to be enacted. Just as they have done in Texas, industries and trade associations are also filing a barrage of lawsuits against local governments to frighten off other localities considering the same option. For example in Trenton, New Jersey, six trade associations -- the New Jersey Business and Industry Association, the New Jersey State Chamber of Commerce, New Jersey Food Council, New Jersey Restaurant Association, New Jersey Retail Merchants Association, and the state branch of the National Federation of Independent Business -- have gone to court to challenge the results of the November 2014 earned sick days ballot measure. A preemption bill is also looming.

A diversity of industries are pursuing this aggressive strategy against grassroots democracy, but what may be surprising to some is that a group dedicated to individual liberty and "limited government," which in 2010 authored a model bill recommending that local governments block and preempt stricter state and federal laws, is at the center of it all.

When cities like Seattle and Los Angeles took action to "raise the wage" in 2014, the American Legislative Exchange Council (ALEC) jumped into action. The Guardian reported that ALEC and its local government offshoot the American City County Exchange (ACCE) "launched an aggressive dual-track mission that combines legislation and litigation in what ALEC calls a 'new battleground' over worker compensation."

At an ACCE meeting in December 2014, Cara Sullivan, who heads ALEC's Commerce, Insurance and Economic Development Task Force, explained: "Perhaps the biggest threat comes from the local level." Her solution? "One solution that ALEC has passed is state legislation that preempts the polities from within the state from raising the minimum wage higher than the state level."

If this sounds like an strange talk to be giving a room full of city and county officials it is. And it gets stranger. Karen Moreau of the American Petroleum Institute's New York lobbying group also lectured the local officials on the danger of local control.

"It really hit me when I visited a Holocaust museum here a couple years ago in DC," Moreau said, "and I wandered through the exhibit that describes the rise of Hitler and describes the rise of Fascism, and how Fascism actually takes hold, and it struck me because it was so similar to what I see happening in our small towns on issues like fracking."

What do grassroots advocates think of it all?

"It is clear what is going on here. They want to stop our momentum. So they're expanding their toolkit to try to undo democracy and delay justice," said Ellen Bravo, Executive Director of Family Values @ Work, which advocates for paid sick days. "They will fail, but in the meantime, they will make many families less economically secure and less healthy," Bravo added.

We have seen this play before. It was drawn up decades ago by the tobacco industry with the help of ALEC legislators to fight local public health restrictions on smoking, tobacco and tobacco advertising to youth.

ALEC legislators worked with the industry on a strategy to get weak, permissive state smoking laws passed in order to prevent cities and towns in the state from enacting stricter smoking laws. One 1994 document shows the industry crowing over passing laws in 18 states to preempt localities from restricting smoking and their efforts to target 19 more states in 1995.

By 2000, the industry had systematically and successfully enacted preemption legislation in the majority of states. The preemption not only put the lives and health of millions at risk, it sucked a lot of air out of burgeoning grassroots movement.

"I think we all recognize that building genuine grassroots movements is one of the few ways left that 'We the People' can still protect our own health and safety, whether in the workplace or in the community," Mark Pertschuk from the watchdog group Grassroots Change explained to CMD. "The most devastating thing about preemption is that it destroys grassroots citizen movements. This is why interfering with local control is such a high priority for the industries that support state (and federal) preemption."

Below, we detail recent preemption efforts in three categories.

The dual-pronged strategy of legislation and litigation is being used to thwart local minimum wage laws.

In Washington State, soon after Seattle's City Council took the historic step of enacting a $15 minimum wage, ALEC member the International Franchise Association sued in federal court to block the law's implementation, making the extraordinary claim that it "discriminates" against franchises like McDonald's in violation of the Fourteenth Amendment. A District Court judge rejected the lawsuit, but it appears the IFA is planning to get its case before the U.S. Supreme Court: it has hired Paul Clement, a conservative super-lawyer who has argued 74 cases in front of the nation's highest court, including the challenge to the Affordable Care Act. In 2014 and 2015, wage preemption bills were introduced in the state which would kill the Seattle wage hike.

In Los Angeles, another massive trade association, the American Hotel & Lodging Association (AHLA), sued after the city raised the wage to $15.37 for hotel workers.

Representatives of both IFA and the AHLA spoke at the December ACCE meeting about their plans to thwart local wage increases.

Crawford compared the industry's battle against local wage laws to a game of Whack-a-Mole: "We're trying to beat them down when they pop up."

"The amendment was introduced because we do not want to allow municipalities to try to sneak in changes to local ordinances before this bill is placed into law," he said. Rep. Seth Grove, an outspoken ALEC member and frequent sponsor of ALEC legislation, is also pushing a bill to block cities from enacting paid sick day laws. (Grove tried, but failed, to push similar measures in previous sessions.)

For example, after seven New Jersey cities enacted paid sick day initiatives last year, a group of big business lobbies (including affiliates of the National Restaurant Association and Chamber of Commerce) sued to block Trenton's law, throwing an array of tenuous legal arguments at the wall.

"They couldn't defeat it at the ballot, so they filed a lawsuit to delay it, and perhaps intimidate other cities from trying," Bravo said.

The lawsuit claims that, because New Jersey regulates temporary disability benefits and family leave, the state "occupied the field" of sick leave, prohibiting local governments from addressing the issue. The suit also claims that paid sick days amount to an increase in the minimum wage, since a worker is paid when they are home sick. But a worker who benefits from a paid sick day law doesn't get extra pay; it means they won't be docked pay when sick.

Hydraulic fracturing, or fracking -- a controversial method of gas and oil extraction 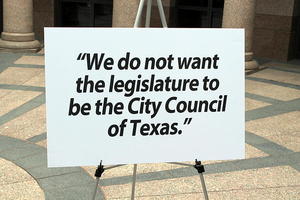 that injects a high-pressure mixture of chemicals, water, and sand into underground wellbores -- has been linked to earthquakes and contaminated water resources. Dozens of cities in states like Ohio and Pennsylvania have banned the practice in recent years. Concerned citizens in Denton, Texas went up against the the state's most powerful special interest and approved a fracking moratorium as a ballot measure in November 2014.

But the powerful oil and gas industry is fighting back against such efforts with a lawsuit and with help from ALEC legislators.

In the Texas legislature, Rep. Phil King, who currently holds the highest position in ALEC as the group's national chair, sponsored a bill to preempt Denton and other cities from banning fracking or other oil and gas operations.

In Ohio in February, the state Supreme Court outlawed local bans in a lawsuit brought by industry. And in Texas and New Mexico, even more draconian bills have been introduced to penalize localities by withholding state funds if they dare to regulate fracking.

"It's not just our air, water, health, safety, and our property values," said Adam Briggle, Vice President of the Denton Drilling Awareness Group. "But it's to exercise our right, what I would call public liberty, which is having a say that impacts you in important ways. And so we exercise what I consider grassroots local democracy."

Although it has primarily been "Big Government Republicans" pushing state bills to block local control, in some cases Democrats have signed-on to the measures, often as part of a "compromise" for short-term gains and often at the behest of corporate interests. This is most common in states where statewide legislation, such as a minimum wage increase, is likely to pass. Rather than fighting a losing battle against the law, business lobbies promote the addition of preemption language as a way to stave off local efforts in the future.

Last year, for example, Democratic-controlled Rhode Island raised the state minimum wage to $9, and also blocked local governments from enacting higher local wages. At the time, Providence was considering a $15 minimum wage, and the restaurant and hotel industries pushed the preemption measure to block the local law.

Last month, Democrats in the Illinois Senate passed a bill to raise the statewide minimum wage to $11, but under pressure from the state National Restaurant Association affiliate, the measure also preempts a recently-enacted Chicago law that raises the wage to $13/hour.

In New Mexico, the National Restaurant Association affiliate has stated that it will support a higher minimum wage, as long as it is coupled with preemption.

Although coupling a minimum wage increase or other progressive legislation with preemption may bring a short-term benefit, it has long-term consequences in communities across a state.

"Local communities must continue to stand up for the rights of those neglected by the state," said Briggle, "or we will not only risk our health, but also lose the last venue in which we can take control of our own destiny."