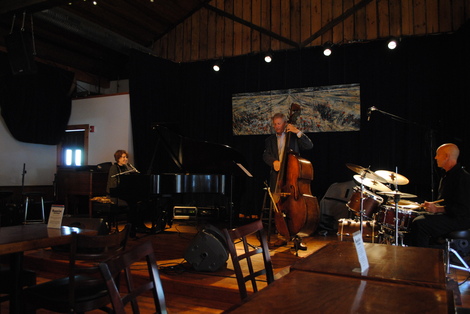 On Sunday September 14, 2014 in the Hudson Valley hamlet of Marlboro, N.Y., the singer Alexis Cole in her own sublime way made Sunday brunch at Tony Falco's The Falcon an early fall treat.

With the smell of nearby apple orchards perfuming the crisp, fresh air on this glorious day, the roads were crowded with apple pickers and wine tasters who make the trek up to this area to partake in area's ripening bounty of produce that grow on the ridges of this fertile region of Ulster County New York.

Alexis Cole has been compared to the likes of Sarah Vaughan and Anita O'Day, but in truth she has her own style that is an amalgam of her many influences. Will Friedwald, the respected jazz critic, wrote: "Alexis Cole does many things well... but what she does best is slow sultry numbers, both standards and the blues..." On Sunday, Ms. Cole on piano, led a trio at The Falcon that included the superb bassist David Finck and the understated drummer Ken Hassler. Her repertoire was peppered with interesting standards that she played with an easy sense of swing and a genuine dose of emotion.

The trio went through numbers like Jobim's "One Note Samba", Jerome Kern's "All the Things You Are", Jimmy Van Heusen's "Polkadots and Moonbeams" and a Blood Sweat and Tear's influenced version of Billie Holiday and Arthur Herzog's "God Bless the Child."

The format featured Ms. Cole's wonderfully warm contralto voice, which modulates along the melody in interesting and unexpected ways and Mr. Finck's bass solo's which were equally warm, facile and inventive. Mr. Hassler wisely stayed muted for the most part, letting the two lead voices shine as he lent his subtle, unobtrusive rhythmic support.

True to Mr. Friedwald's observations, Ms. Cole shined on her rendition of Joao Gilberto's "Estate" (Summer) made famous by the great Shirley Horn. Ms. Cole seemed to be channeling the late singer's sultriness to perfection in the most moving performance of the set. She can make simple phrases seethe with genuine passion, sensual but not prurient. This type of song is truly her forte and she would be well served to dig deeper into Ms. Horn's repertoire for some additional material..

The set concluded with the overplayed Billy Joel's "New York State of Mind" and a loosely swinging version of Jimmy Van Heusen and Johnny Mercer's "I Thought About You," which had the band stretching out a bit.

I first heard Ms. Cole on a wonderful album of music written by the late, great baritone saxophonist Pepper Adams, titled "Joy Road: The Complete Works of Pepper Adams Vol 5" I Carry Your Heart. She skillfully managed Adam's instrumental songs, that had lyrics written by Barry Wallenstien, like a skilled horn player fronting a swinging band.

Ms. Cole is a sergeant on active duty with the US Army and the vocalist with the West Point Band's Jazz Knights so her career is on an interesting dual path, but if she continues to pick the right material she can easily be catapulted into the forefront as one of the leading female jazz singers of her generation.