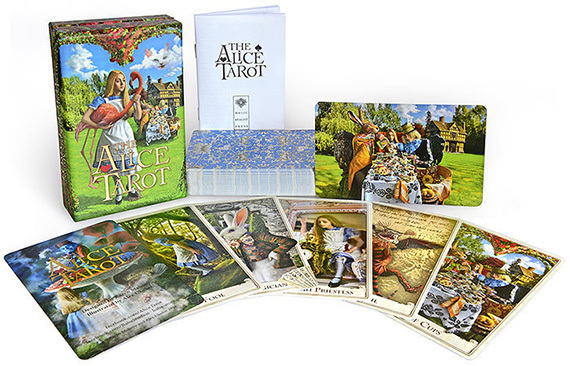 Are you a fan of the children's classics Alice's Adventures in Wonderland and Through the Looking Glass?

Are you a Tarot card enthusiast?

If you're either, or both, there's a new creation that might interest you: The Alice Tarot, a Tarot deck based on the characters, stories, poems, and ideas in the Alice books. The cards are made by Baba Studio in Prague, Czech Republic, which is run by Irish designer Karen Mahony and her husband, Russian illustrator Alex Ukolov. Mahony and Ukolov honed their skills on previous award-winning Tarot decks including The Tarot of Prague, The Baroque Bohemian Cats' Tarot, The Victorian Romantic Tarot, and The Bohemian Gothic Tarot. They have built a reputation as one of the most consistently interesting design teams making Tarot cards today. I recently visited them and interviewed them about all their decks, including The Alice Tarot; read that in-depth interview here! 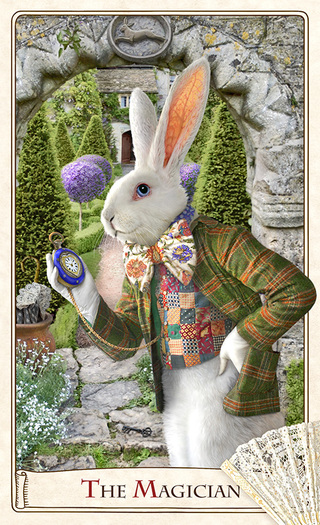 Literary Tarot decks are nothing new; there are decks, for example, based on the works of Jane Austen, Dante, and Bram Stoker, to name just a few. This isn't even the first deck based on the Alice books! As is usual for such decks, Mahony and Ukolov selected and illustrated scenes from the books that correspond roughly with the traditional meanings and symbols found on Tarot cards. There are several Tarot card systems to choose from, and for the most part, the Baba team chose the characters and situations depicted on the cards created by scholar Arthur Edward Waite and artist Pamela Colman Smith in the early twentieth century--the so-called Rider-Waite-Smith or RWS pack.

Looking for those characters and situations in the Alice books yielded some inspired illustrations. Among the Tarot trumps or Major Arcana, some of these seem immediately logical. The Magician card shows the White Rabbit, holding his pocket watch up in his right hand, his left hand on his hip with fingers pointing down, much as he does in John Tenniel's classic illustration from the original book. This corresponds to the RWS magician, whose right hand points upward with a wand, and whose left points down toward the ground, in a magical gesture summed up by the phrase "as above, so below." As the character that brings Alice into the magical realm, supplying both the passageway and the impetus to enter it, he's a good representation of the Magician. 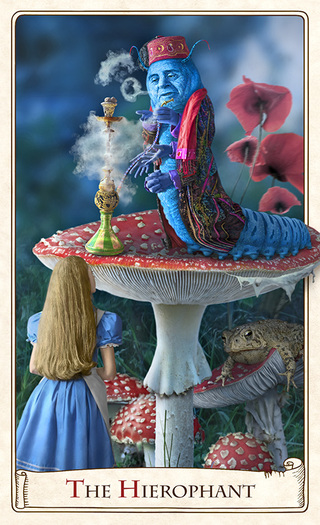 The Hierophant shows the Caterpillar on his high mushroom seat, much like the RWS Hierophant (or Pope) on his lofty throne; Alice and a frog stand in for the Hierophant's usual two acolytes, and a smoking jacket and smoking cap stand in for his papal robes and crown. The Caterpillar's authoritarian air, the deference with which he is treated by Alice, and his mastery of the magic of Wonderland make him a good approximation of the traditional Hierophant.

Some of the other trumps take more thought, but ultimately make sense. The Justice card does not show the typical goddess with scales and sword, but the Mouse's tale/poem known as "Fury Said to a Mouse," which recounts an abortive legal trial. The Lovers card features the Walrus and the Carpenter; Mahony is quick to point out that there are no real lovers in the books, so these best friends (or duplicitous rivals) are the best approximation. (Just in case this doesn't resonate with you, they included an alternate Lovers card showing a pair of flamingoes.) 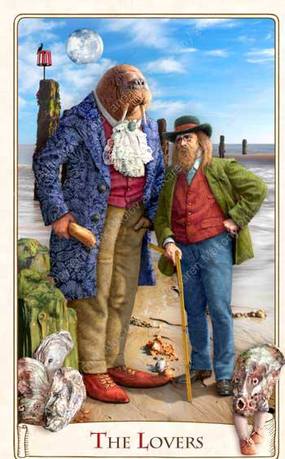 The Minor Arcana, or suit cards, are given similar correspondences. The Page of Cups is Carroll's "Fish Footman," who arrives at the Duchess's house with an invitation from the Queen of Hearts. This works on multiple levels: e.g., in traditional Tarot symbolism, pages are often messengers, and this is the role of the fish footman; the suit of Hearts is historically the same suit as Cups; and the RWS Page of Cups card includes a fish, which is meant to symbolize things of the mind taking tangible form. As with the trumps, they don't always hold closely to images that resemble the RWS pictures, but they usually find an appropriate image from the narratives. For example, the RWS Ten of Swords, symbolizing utter defeat, often through betrayal, shows a man stabbed by ten swords. In The Alice Tarot it instead shows oyster shells lying on the beach. If we recall that in Through the Looking Glass the oysters trust the Walrus and the Carpenter to take them for a pleasant walk, but end up being eaten instead, we see the traditional meanings of the card. 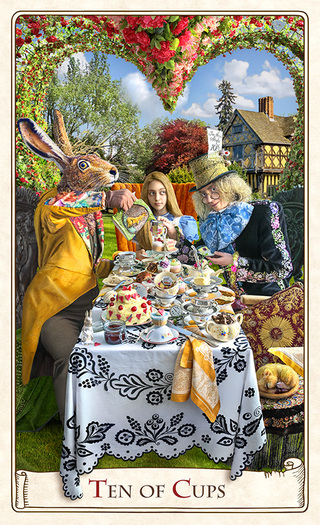 The Alice Tarot gets its distinctive lush look from the Baba team's unique approach to illustration. Each card is based on photographs of places, animals, objects, and costumed people, collaged into seamless tableaux and blended through skillful illustration. The cards use bright colors, and a semi-gloss finish touched with metallic inks that make for great depth. This all has a surreal effect in scenes such as the mad tea party, shown on a number of cards, which includes Ukolov as the Mad Hatter, his real-life daughter as Alice, and a realistic-looking March Hare and Dormouse. The clothes worn by many of the characters, even the giant animals, are spectacularly detailed costumes that really exist in full scale (I've seen and even worn some of them, such as the Hierophant's smoking cap--see the photo below!), which yields a degree of realism rare in illustrations. On the other hand, the presence of talking fish, goats, hares and walruses (not to mention living chess pieces and playing cards) challenges that realism with a striking touch of the uncanny. The result of all this attention to detail is that the cards look like scenes from a well done live-action Alice film.

The cards thus provide a rich store of images, vibrant colors, and familiar situations, some whimsical and some frightening. In general, though, what do the cards mean, and how do Tarot cards relate to the Alice books? Lots of people say that the books are drug trips, and some of you have probably been told that Lewis Carroll (or Charles Dodgson, as he was known in his daily life) was stoned when he wrote them. But scholarship suggests such interpretations are too fixated on small details: the mushroom, for example, or the caterpillar and his hookah. Although Dodgson could have read about the effects of mushrooms in any of a number of books, he isn't thought to have been a drug user. (Similarly, allegations of pedophilia or sexual deviance are entirely speculative, and recent scholarship doesn't support them.) However, he did frequently experience an altered state of consciousness, and he explicitly included this altered state as the explanation for Alice's experiences in both books. 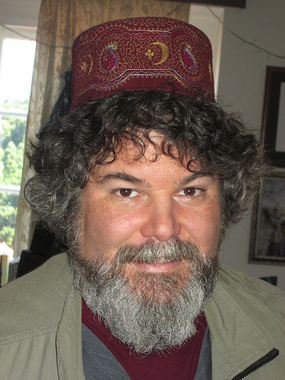 I'm talking, of course, about dreams. Both Alice's Adventures in Wonderland and Through the Looking Glass end their main narratives with Alice waking up and realizing all the crazy goings-on have been a dream. This makes Alice an early example of the "all a dream" trope so familiar from sitcoms and other TV shows. But the Alice books are much more dreamlike than most such stories. Since psychologists think dreams reveal our unconscious mind, the Alice books are a storehouse of subconscious imagery, and have been treated so by generations of psychoanalytic scholars.

This suggests a good way to use the Alice cards. Even if you don't believe in, or care about, the more magical claims about Tarot cards, Tarot divination can still be helpful and therapeutic. Indeed, Tarot divination is a form of folk therapy in which some subset of the 78 Tarot images is dealt and then interpreted in relation to the questions you may have about your life. Depending on the reader, this can be as much like a psychotherapy exercise as old-school fortune-telling. The Alice cards, which are pre-programmed with ideas from dreams and the unconscious, make an ideal tool for exploring psychological questions. Just be careful; the Alice books have never been as sweet and innocent as many peoples' memories of them. Fear, violence, and madness are often just around the corner. (You know, just like real life!)

The Alice Tarot comes in a richly illustrated cardboard box with a booklet explaining the cards. A more detailed explanation is available in a separate companion book. A special limited, numbered edition, consisting of larger cards in a wooden box, was briefly available from Baba, but sold out almost immediately; you can try ebay or similar sites for one of those. Whichever version you buy, I highly recommend this deck for its beautiful artwork, the light it sheds on the Alice books, and the psychological depth of its images.

Baba also carries bags, purses, scarves, and other textile items with designs from the Alice Tarot, from their other decks, and from Art Nouveau and other classic art movements.

And don't forget, there's a detailed interview with the Baba team about all their many works, available on my website.