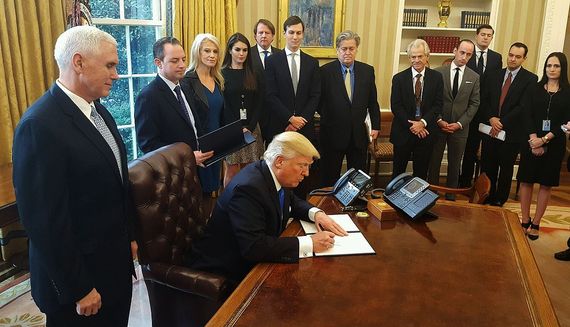 In 1852, long before the advent of reality television, a self-taught former slave delivered what students of rhetoric know as the Fourth of July speech to the citizens of Rochester. It was a bracing tirade. Here is a snippet:

"Your prayers and hymns, your sermons and thanksgivings, with all your religious parade and solemnity," are, to the slave, he said, "mere bombast, fraud, deception, impiety, and hypocrisy - a thin veil to cover up crimes which would disgrace a nation of savages."

Frederick Douglass was an abolitionist, suffragist, author, and statesman. He died in 1895. Last week, our forty-fifth president, who shows no sign of an education, marked the beginning of Black History Month by reducing this legendary orator to an employee of the month: "Frederick Douglass is an example of somebody who's done an amazing job and is getting recognized more and more, I notice."

I suppose we should be grateful that our nitwit-in-chief quickly moved on to his favorite subject of himself before he could challenge Cedric the Entertainer's character in Barbershop for the most offensive take on a revered African American. I only wish Trump were similarly fictional.

That was but one in a series of farcical incidents during Trump's first two weeks in office. In a call to Mexican President Enrique Peña Nieto, Trump threatened an invasion to deal with that country's "bad hombres." In a call to Australian Prime Minister Malcolm Turnbull, he insulted our staunch ally over 1,250 refugees we had agreed to take. At the National Prayer Breakfast, he jokingly called for prayers to lift Arnold Schwarzenegger's ratings for "The Apprentice." He signed an executive order against refugees without consulting anyone with a clue or a Constitution, then insulted a judge for blocking his dictatorial impulses. He decided he could botch a raid in Yemen just as well from the dinner table as from the Situation Room. He excused Vladimir Putin's murder of opponents and critics by suggesting America is just as bad. His counselor Kellyanne Conway cited a nonexistent Bowling Green Massacre and slammed the press for not covering it.

Some of us clung to our sanity by trading memes. The slogan "I'm with her" accompanied a picture of the Statue of Liberty. A still from the Alien film series was posted in which the horrible creature getting up in Ripley's face was replaced with Ms. Conway.

I'm afraid we are giggling past the graveyard. Gay friends of mine who came to America seeking asylum from persecution remain afraid despite assurances from their attorneys. They wonder what Trump will do next. A draft executive order has been circulating that would allow discrimination in the name of religious freedom, ignoring the fact that mutual tolerance is the bedrock of a diverse society. Congressional Republicans moved to gut healthcare and financial reforms, repeal ethics rules, abolish environmental protections, even restore gun access to the mentally ill.

A bright beacon during these dark days has been the surge of protest and action by everyone from immigration attorneys and the ACLU to ordinary citizens in response to Trump's constitutionally questionable executive order aimed at Muslim refugees. Acting Attorney General Sally Yates sacrificed her job by refusing to defend the order. A rebuke from the Gospel struck a deep chord in many Christians: "I was a stranger and you did not welcome me." (Matthew 25:43)

The Resistance is in its early stages. Republicans control both ends of Pennsylvania Avenue, and at this point are showing more unity than Democrats, who as Sen. Elizabeth Warren points out, are in need of a backbone. Several cabinet nominees have been (or are about to be) confirmed whose records conflict with the missions of their agencies. The president's closest advisor is Steve Bannon, who, as House Democratic Leader Nancy Pelosi observed, is a white supremacist.

During his takedown of red-baiting Sen. Joe McCarthy in 1954, journalist Edward R. Murrow reminded American viewers, "We are not descended from fearful men." He was holding ordinary citizens responsible for the evil done in their names. In a similar vein, Sen. Kamala Harris tweets: "If you've ever wondered what you would have done during the Civil Rights Movement, this is your opportunity to find out. #goodtrouble"

This piece originally appeared in the Washington Blade and Bay Windows.