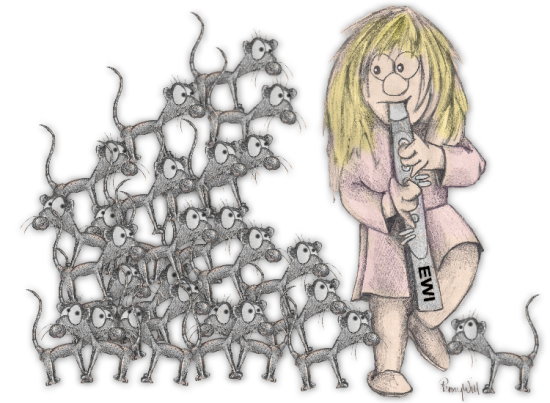 An EWI (pronounced EE-WEE), is not a genetically engineered cross between an emu and a kiwi, as the name suggests, but rather, a musical instrument, and a very cool one at that.
EWI stands for Electronic Wind Instrument and though these have been around for many years, there have been some significant improvements -- in particular, to the EWI 4000s by Akai, which I own. The most amazing and wonderful aspect of the 4000s is that it is a stand-alone instrument. It doesn't require a computer and runs on four AA batteries. It has 100 on-board sounds, so you can just plug in some headphones and start playing. This is awesome because you can practice anywhere, anytime without disturbing a soul, even if you live in a cupboard under the stairs.

The EWI is capable of much more expression than acoustic instruments, which may be as surprising to you as it was to me. Advanced EWI players (which I am not) can take full advantage of these features to achieve astonishing levels of expression:

There are no on-board speakers so if you want to play "out loud" or record, you can connect the quarter-inch output to an amp, the same as you would with an electric guitar. The EWI also has MIDI in and out, so you can play directly into a computer and access its VST instruments and sound banks.