We're not saying we believe everything -- or anything -- The Amazing Kreskin says. We do admire that he's been out there making predictions for more than six decades, somehow managing to stay in the public eye.

It's nice work if you can get it. And Kreskin can.

You've got to admire anyone who begins the year with NPR's Leonard Lopate and then has Fox News Chairman and CEO Roger Ailes, one of his biggest fans, at his 80th birthday party.

In the age of a divided America, Kreskin manages to have an audience with both sides of the aisle.

We were there last week at New York's City Crab, as the mentalist celebrated his new life as an octogenarian. While noshing on fresh seafood, we spoke with the mentalist's celebrity friends and others, who absolutely believe Kreskin is Amazing. 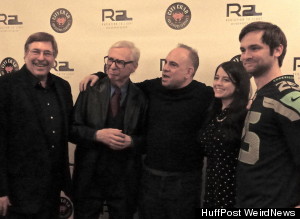 Kreskin even told us the day he'd retire. "Exactly 10 days after I drop dead," he said.

Kreskin is now promising us a special present: To celebrate HuffPost's 10th anniversary in May, he'll make some predictions about the website and the next ten years. He's even going to write a document that will be sealed in our offices until 2025, as a message to future readers.

We asked Ailes for his predictions, too. You probably won't be surprised that the Fox News chief doesn't see amazing things for us in his crystal ball.

In our podcast, Kreskin talks about his wild ride as a TV and stage star. Johnny Carson jumpstarted his career back in the 70s, when he became a "Tonight Show" regular, appearing 61 times in a 10-year stretch.

Jay Leno was less of a fan. But he scored with Letterman and Jimmy Fallon.

Of course, Kreskin has hit bumps along the way. A former road manager based the 2008 film, "The Great Buck Howard," on his experiences, and John Malkovich's portrayal of a temperamental, sometimes abusive performer was less than flattering.

Kreskin counters that the film was never intended to be a biopic, even though many viewed it as such. And, to be sure, Malkovich captured Kreskin's stage persona, right down to the pull-your-arm-out-by-the-socket handshake.

Then there was Kreskin's oft-cited 2002 prediction of a mass-UFO sighting over Las Vegas. Thousands of spectators showed up in the desert hoping for a close encounter with ETs. They left massively disappointed.

Through it all, this 80-year-old man, inspired as a kid by "Mandrake the Magician" comics, has wowed people on stage. We came for the crab and a brush with celebrity. But we left with what could be a vision of our destiny.

CORRECTION: A previous version of this article misstated Ailes' title as "president" of Fox News. He is chairman and CEO.