For all of his feats of superhuman strength and arachnid-derived powers, the true reason Spider-Man has resonated with generations of fans is the human being under the iconic, skintight red and blue costume. Beyond the powers, he's simply Peter Parker, high school geek with a major guilt complex.

A socially awkward science wiz, the fateful day that saw his skin pierced by a radioactive spider alleviated his physical weakness, but in many ways, caused an even further crippling of his identity; trying to grapple with those new powers, dealing with the guilt that he suffered after blaming himself for his Uncle Ben's death, and keeping his alter-ego a secret were all new obstacles in his difficult emotional terrain.

The upcoming Marc Webb-directed film reboot of the web slinger's story, plainly and authoritatively titled, "The Amazing Spider-Man," brings the series back to those roots, focusing on Peter Parker's early days with his powers. In Andrew Garfield, the film has a star who is quite sympathetic to that story, and to the earnest change through which the character goes through.

"Stan Lee says that the reason why Spidey is so popular is because all of us can relate to him, and I agree. I needed Spidey in my life when I was a kid, and he gave me hope. In every comic I read, he was living out my and every skinny boy's fantasy of being stronger, of being free of the body I was born into, and that swinging sensation of flight," he told an audience at July's Comic-Con. "And upon receiving his power, unlike most who have become corrupted, he used it for good. And I think that we all wish we had the courage to stick up for ourselves more, to stick up for a loved one more, or even a stranger you see being mistreated, and Peter Parker has inspired me to feel stronger. He made me, Andrew, braver. He reassured me that by doing the right thing, it's worth it. It's worth the struggle, it's worth the pain, it's worth even the tears, the bruises, and the blood."

That transformation, with his tenderness with loved ones and superhuman strength playing equal parts in his young life, is shown in some new photos from the film, which you can see below. Included are moments with Gwen Stacy, his original love, played by Emma Stone, and his Aunt and Uncle, played by Sally Field and Martin Sheen. 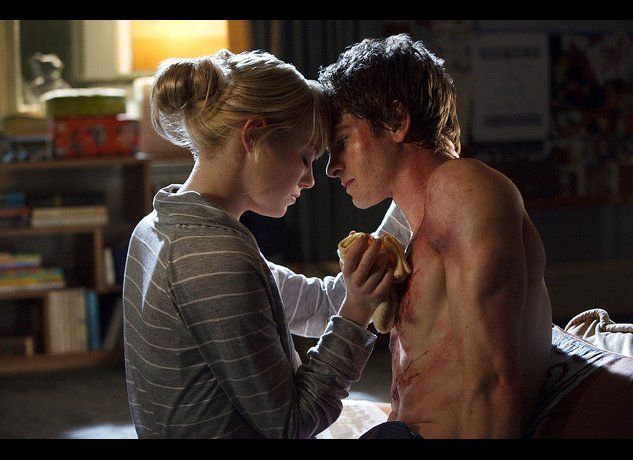