Debate whether animals have souls, but Tatou had character. I don't mean just that he could act cute or rambunctious - that too. Rather, Tatou was thoughtful evidencing loyalty, integrity and empathy with persistence. Like all beings, he would be impulsive and instinctive but you could also see him reason through choices. Confronted with the pleas of his two human handlers to come to each, his face would exhibit a pained choice, and more often than not he would look for a compromise by placing a paw on each even if physically awkward and strained. At least when it came to being able to conjure a compromise, Tatou was an Ambassador himself. 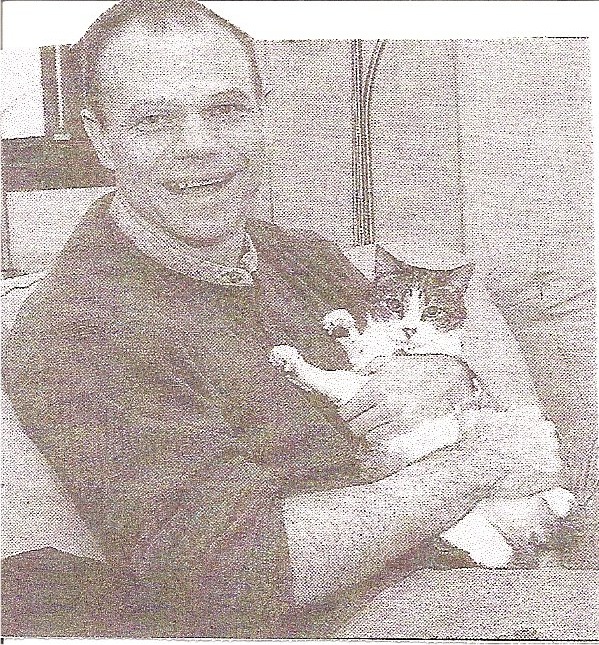 Tatou did not give speeches but his meows were eloquently short in a deliberate demand or in response to a question - yes, he would almost always respond with a meow to a verbal inquiry. He of course knew the usual tricks of a cat in the morning, more seeking company than food - he would stare, then slap the lampshade with his paw and finally if all else failed, he would try to pry your eyelids open with his paw. While newcomers initially used to make him nervous, overtime he again became more reasoned toward the intrusion. He would perform for attention or seek some form of interaction or mere acknowledgment as being one of the hosts. Like most cats, he became nervous when being taken out of the home but would attentively take in all the visual, audio and olfactory stimulation especially while riding on the top of the shopping cart at the pet store.

A "Tom-Cat: who Learned a Sense of Humor:

Tatou was definitely born an alpha male "Tom-Cat," - as a kitten he was both fidgety and independent minded. He could be aggressive as a young cat but gradually he became a peacemaker, even when our female cat Mitzi would taunt him, most of the time. He loved his obviously more vulnerable brother Giligan, and the two of them would sleep together as if one curled feline. When he would sleep with us, overtime he moved from the bottom of the bed to eye-level, perhaps wanting be closer or just asserting his equality. Teased, he learned to tease back. He initiated playful interaction.

Courage in Face of Death:

In life as in death Tatou maintained his dignity and care for all of us. He was courageous fighter while initially defeating cancer through surgery and chemotherapy. Undoubtedly this "treatment" was uncomfortable-painful but he never lost confidence or affection for us. After two years the cancer returned with a vengeance. The slide toward death must have been especially frustrating as his limbs gradually became frozen due to a central nervous tumor. However, till the end he remained loving and sought the interaction perhaps seeking to be positive for us, fellow cats and humans, in the face of his degradation. Rather than withdraw, he would still respond to my words. He licked his fellow feline family as if to reassure them. When he could no longer walk to the litter box, he would meow for me to carry him. It probably was an ignominious experience for him to be held up while he used the litter box.

We had hoped that he would miraculously recover, and then faced with the inevitable, that he would merely die at home in our arms. (After his long battle with cancer and extended treatment, vet's offices were not his favorite. He would hide his head in my armpit as not to have to face it.) The cancer and probably effort to maintain normalcy though sapped his strength. He could barely reach over to eat or drink. We so wanted for him to tell us that it was OK to take him to the vet to have him put to sleep as we saw him as one who had as much right to define his end even if he had no choice as a kitten in who his "owners" became.

He sailed away with a meow, a goodbye or a prayer I do not know, perhaps to us as his Demigods or as greeting a Superior Being. Having no human offspring, Tatou proved to be more than a mere substitute. (I can only imagine what it must be for a parent to experience the death of a child - at least it is understood that we are supposed outlive our pets.) He was not only a comfort and entertaining, but he re-enforced if not taught courage, character, loyalty, empathy and most certainly love. Undoubtedly animals are a reflection of us in part. However, they are all unique and carry and develop unto themselves despite their genes and environment. Otherwise, how to explain the very different personalities of Tatou and his brothers Giligan and Moesley. Regardless, if Tatou is a reflection upon me, it is flattering that he was my ambassador. "How we relate to animals in our care can be both a bond for people of varying backgrounds and an indication of our humanity. I care not much for a man's religion whose dog and cat are not the better for it." Abraham Lincoln