Before we can strive for excellence in education, we need to first achieve parity in its quality. Today, an American High School diploma is two years behind the International Baccalaureate and its European counterparts. The IB focuses on the development of the whole child as an inquirer, both in the classroom and in the world outside, and becoming a critical and reflective thinker. 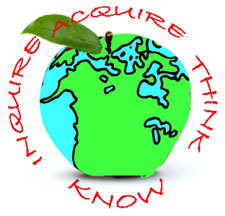 It is time for an American International Baccalaureate equivalent, not just to raise expectations, but to demand them.

The core of the curriculum is math, not just as a subject, but as the fundamental path to analytical thinking. The teaching method is "math inquiry", a philosophy of teaching where children explore mathematical concepts and construct their own solutions. The primary goal is not to achieve proficiency in Calculus II, but to gain a full comprehension of logical, critical and creative thinking with a holistic and concurrent teaching of all branches of mathematics, including analysis, algebra, geometry, discrete math and logic. The sectional way in which math is taught today is counterintuitive, and the cause for the apprehension so many children feel towards the subject. Imagine learning a language this way; one year you learn vocabulary, just a long string of words, next year you learn grammar, and so on, years later you will not be able to think or to fluidly express yourself in the language. The same is true of mathematics.

That same principle is then applied to the teaching of all disciplines; grammatical analysis is taught in a language class, history is taught with an emphasis on cause and consequence, cycles, and political perspective.

Learning a second or third language also contributes greatly to the development of conceptual thinking and creativity. As a professional interpreter, I know that no two words are exact equivalents; each word is a unique concept, each language has a unique perspective. The aim, once again, is to broaden the child's mind and curiosity.

At high school level, the core of the IB program is a course called Theory of Knowledge. The following is the course description given by the International Baccalaureate Organization:

It offers students and their teachers the opportunity to: In addition, it prompts students to:

As a thoughtful and purposeful inquiry into different ways of knowing, and into different kinds of knowledge, TOK is composed almost entirely of questions. The most central of these is "How do we know?"

It is a stated aim of TOK that students should become aware of the interpretative nature of knowledge, including personal ideological biases, regardless of whether, ultimately, these biases are retained, revised or rejected.

TOK also has an important role to play in providing coherence for the student as it transcends and links academic subject areas, thus demonstrating the ways in which they can apply their knowledge with greater awareness and credibility.

Wouldn't this be a better world if everyone who will ever read a paper, listen to talk radio or watch the news, would have taken this class -- a sort of "vaccination" against absurdity?

The goal is to teach a child to learn, to connect the dots, to convert data into information, and information into knowledge. Life will bombard children with information, the ability to thread relevant facts together and to separate what is logical from what is not will set then on their respective paths as life long learners and independent thinkers. They will excel, not just because of the knowledge they accumulated in school, but because learning itself was the lesson learned -- like a bookshelf yearning to be filled. Teaching concepts instead of raw data will make all future learning a natural process of assimilation, not memorization. We are only in school for a few hours during a few years; the rest of our knowledge will be acquired throughout our lives. Being able to separate the illogical from the logical, recognizing cause and effect and threading information together is the most important thing a school can teach a student.

Math is the language of logical learning and questioning; more math does not mean harder math. On the contrary, as with all languages, practice makes perfect. Mathematical reasoning should flow with the same ease as one's first language, especially at the elementary and middle school levels. It becomes a familiar thought process, not open to interpretation, rot, or memorization. Math is the only thing not subject to an opinion; it imprints an intelligent rejection of anything that does not hold up to reason.

An inquiring mind is encouraged, including questioning authority, as an analytical mind is the only way to exercise objective and responsible free will. If we dot teach children to process and compile information through a question mark, democracy itself becomes a parody.

I once received a call from my son's high school counselor. She was calling to tell me that he was questioning authority. I answered with obvious delight, "Thank you, that is wonderful!" My mistake; she was under the impression she was delivering bad news. She ranted a few words to this effect, so I tried to clarify, "Did he defy your authority; was he disrespectful?" I knew my child and I knew the answer: "Not at all, but he is questioning authority!" I replied that I thought that such was the goal of education and asked what she thought I was sending him to school for. She hung up mid sentence and I was left with a deep sense of guilt for not being able to afford the kind of education for my son I had been lucky enough to receive.

I have gone to many parent-teacher conferences where, regardless of the subject taught, projects, drawings, glue and paste what you learned exhibits, were what the teachers had to show for their curriculum.

My son was fortunate enough to go to one of the best public middle schools in the country. I remember he was assigned a project about Manzanar, the prison camp where American citizens of Japanese descent were held during WWII. His assignment was to build a diorama of a barrack. It was a lot of work, but while he cut, built and pasted, his questions were more often about how to glue sand to cardboard and where to find miniature furniture than about the constitutionality, or rather, the unconstitutionality of the event, the constitution being a separate lesson and another project. The real teaching moment was missed; he never learned about the xenophobic behavior people exhibit and questionable interpretations of our constitution the government displays during hard times. History was literally reduced to a shoe box.

With a solid and comprehensive education behind them, we can send our children out into the world eager and ready to acquire information and prepared to assess, dissect, and utilize it everyday for the rest of their lives.

Early on, for mostly ignorant political reasons, the International Baccalaureate was rejected. Today, over one thousand public schools in the United States have embraced it, most with remarkable results, found in IB's Programme validation studies, but the education crisis is a national crisis, not a neighborhood problem. The solution is not a fix, but a rebuild at a national level, one with mandatory standards. The political roadblocks are as numerous as are the politics that have brought our schools to their knees. In my next blog, I will expand on theses political entanglements squeezing our children from the right and from the left.