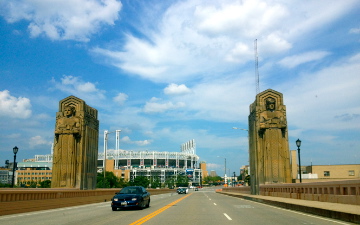 On a recent visit to Cleveland, I found myself so taken by the deep American history and cultural sophistication of this delightful mid-western city that sits on Lake Erie. You can see the past in the historic buildings that speak to another era and then turn a corner to find a sleek structure singing to the future. Cleveland has a character that appreciates its past while embracing the renewal of the future. In 2013, the city has a different kind of American grandeur than it did in its industrial heyday of the early 20th century, but rather than get stuck in the past and not learn the lessons from it, Cleveland has aged well into a modern, global and down-to-earth city. There are many reasons to visit Cleveland, enough to swing the vote right into moving there!

Cleveland is fascinating for its history alone. John D. Rockefeller began his career there as a humble bookkeeper, then went on to build an oil refinery in Cleveland and parlayed that into becoming Standard Oil. Another industrial mainstay, Sherwin Williams, today, the largest producer of paints and coatings in the country, and one of the largest producers in the world, has been headquartered in Cleveland since 1860. 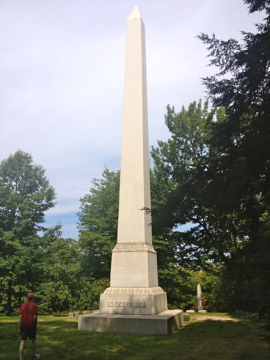 With a stop to "Cleveland's Outdoor Museum," the Lake View Cemetery, in the University Circle area, you can conjure up Cleveland's past by looking at gravesites. John D. Rockefeller and family are buried beneath a stately obelisk monument. A few steps from there, John Hay, Lincoln's private secretary and former Secretary of State under William McKinley and Theodore Roosevelt, is buried next to his wife, Clara Stone, the daughter of an American industrialist from Cleveland, who built railroads and invested in mills. Again, close by is the President James A. Garfield Memorial, the tomb of our 20th president, that has an observation deck on top where you can see Lake Erie, hence the name, Lake View. Just down the hill from there is the Wade Memorial Chapel with an interior designed by Louis Comfort Tiffany, known for his stained glass "Tiffany lamps," and who is also the son of the founder of Tiffany & Co. One more thing to note is that when they were building Lakeview cemetery in 1869, on 285 acres, they needed stonemasons. The best in the world were from Italy and so the Italians came over and settled in Cleveland, and formed the still thriving Little Italy neighborhood not far from the cemetery.

A trip through The University Circle is a clear indication of the rich and sophisticated culture that has defined Cleveland for many years. Walking or driving through the 276 acres of Rockefeller Park, where you will find the Cleveland Cultural Gardens, founded in 1916, which link together 36 separate gardens representing different countries, an outward manifestation of how the city has honored the rich contributions that come from around the world. Just this year, James Levin, the founder of the Cleveland Public Theatre, launched the Cleveland One World Festival, expanding on the Cleveland "One World Day" that has been held in the Cultural Gardens in the last 65 years. The other great institutions in the University Circle are the Cleveland Art Museum, Severance Hall (the Cleveland Orchestra building), the Botanical Museum, Cleveland MOCA (Museum of Contemporary Art), the Historical Museum (John Hay's house) and the Cleveland Institute of Music. 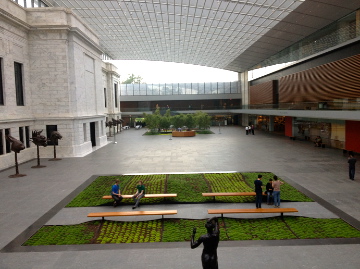 The acclaimed Cleveland Clinic, draws in patients from all over the country for their care and expertise. Case Western Reserve University, joined the Case Institute of Technology and Western Reserve College, is one of the nation's top universities. The Weatherhead School of Management Peter B. Lewis Building at Case was designed by architectural legend, Frank Gehry. Peter Lewis is the Chairman of the Progressive (insurance) Corporation, which is headquartered in a Cleveland suburb.

In the vicinity around Tower City, going in any direction, you will walk into interesting sections. There is the Playhouse Square Association comprised of restored grand theatres, the Ohio, the State, the Palace, the Allen and the Hanna. It is the second largest theatre district in the United States, second only to New York! Walk towards Lake Erie from Tower City and pass by the Public Square, the Old Stone Church, the Majestic City Hall, come across the Rock and Roll Hall of Fame, and off in the distance you'll see the Cleveland Browns Football Stadium. Don't forget the Great Lakes Science Museum! There is a boardwalk in the Flats along the Cuyahoga River. Cleveland is very compact! 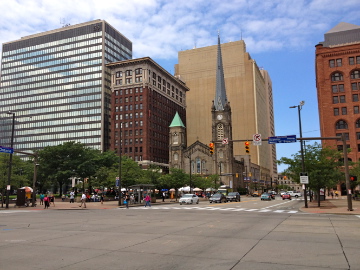 Cleveland is culturally diverse. Just go to the Westside Market in Ohio City and you will love it. It reminded me of the exotic food markets I had been to in Yangon or Muscat. It was so international feeling with beautiful fruits, meats, fish, bakery and flower booths just like you would find overseas. 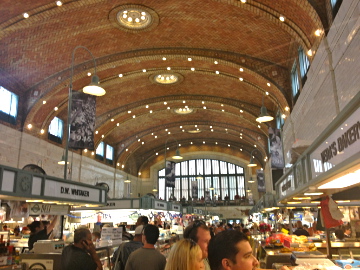 Ohio City is the neighborhood that all the Presidential candidates come through to stump and sway favor. Across from the Westside Market you'll find restaurants and breweries, like the Great Lakes Brewery, that have outdoor café seating much like you would find in Paris or Rome.

The Tremont area is full of artists and creative people. You can still buy a warehouse for a song. There are all these wonderful brick and wooden buildings with ivy growing on them that have been restored (or are waiting there to be restored), made into a yoga or painter's studio. There are cool little affordable houses that artists live in. Tremont is a trendy artist neighborhood with galleries, art and a funkiness to it that feels like the Village in NYC. 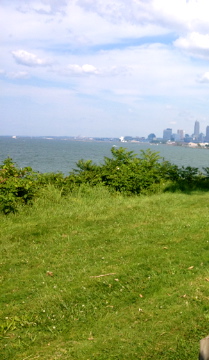 Did I mention that Cleveland is actually affordable? There is another neighborhood, Edgewater, four miles west from the City's center, that reminds me of Sausalito with a view to San Francisco, except in this case, it's a view to Cleveland. It has lawns and gorgeous old trees that abut Lake Erie. There is a view of the city because of the way the lakeside curves around. You can buy a three to four bedroom house with a view in this quiet neighborhood in $3-400,000.00 range. I said hundred thousand, not three to four million. What? Yes.

It is not every day that you have a state clamoring to get you to come and live there and make it so appealing! A non-profit established in 2011 called Global Cleveland will be coming to major U.S. cities this year encouraging people with ties to Cleveland to come back as well as inviting newcomers to consider Cleveland.

What's the catch? There isn't one. As life is, things go in cycles. It just so happens Cleveland is blossoming again. If you are looking for opportunities, reasonably priced real estate, cultural diversity, high culture, top medicine, professional sports and mid-western charm, pack your bags and discover the American grandeur and quality of life of Cleveland has going for it!

More:
sherwin williamsFrank GehryClevelandrockefellerrock and roll hall of fame
Newsletter Sign Up
An essential daily guide to achieving the good life
Subscribe to our lifestyle email.
Successfully Subscribed!
Realness delivered to your inbox