America has a nationalism problem. The U.S. has been described as the melting pot, a nation of immigrants and the Land of Opportunity. Indeed, the story we tell ourselves is that the American identity is rooted not in place, but in the acceptance of a common set of ideals, irrespective of race, religion or ethnicity. The politics of the last decade, however, have strained the notion of e pluribus unum, revealing among whites three definitions of the American nation that are exclusive rather than inclusive.

First come the "Unhyphenated Americans". For decades, the Census Bureau has asked Americans "to what country does this person draw their heritage?" Among whites, German (17 percent), Irish (16 percent), and English (14 percent) are the most common responses. But about one in twelve whites Americans indicated they are just "Americans," indicating an indigenous white identity unconnected to any particular European ethnicity. These Unhyphenated Americans are distinct. They are more likely to be fundamentalist Protestants. Nearly two thirds of them live in the Census South, and especially in Greater Appalachia.

The highest rate of "American" identity is among young rural whites with limited education. Recent surveys find that whites with an "unhyphenated" identity are increasingly voting very conservative and perceive a cultural threat from foreign influences. They also call themselves ethnic "Americans" for patriotic reasons. They favor a stronger national defense. And, they are more likely to think that an individual's life chances are tied to their racial identity (what Michael Dawson called "linked fate"). 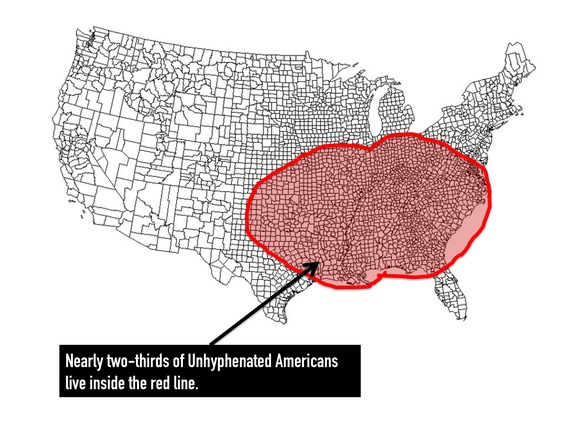 Then there are the Christian Nationalists. The most visible religious tension in American politics is between the Establishment Clause and the long tradition of Protestant ownership of the moral nation. Christian Nationalists have the highest agreement with four statements about America: that is "holds a special place in God's plan;" that "God has chosen [America] to lead the world;" that the United States "was founded as a Christian nation;" and "it is important to preserve the nation's religious heritage." According to a poll conducted by the Public Religion Research Institute in June of this year, 62% of Americans either completely agree or mostly agree that "God has granted America a special role in human history." 52% said "believing in God" and 33% percent said "being a Christian" was very important for "being truly American." Similar distributions have been found in other surveys of the public since 2010. They are also heavily invested in Biblical literalism. Agreement with these statements is strongly correlated with anti-Muslim and anti-immigrant sentiment among white Americans. Politics and the course of America are therefore a question of the degree and intensity of Christianization. Christian Nationalists are often found among Unhyphenated Americans (or vice-versa).

Finally there are the New Nationalists. New Nationalism was coined in the 1990s by journalist Michael Lind, who describes it as an elite white regime. Under New Nationalism, the white elite (or "overclass") withdraws into a private realm -- private neighborhoods, private schools, private health care and private security. Working class whites are abandoned to a broad, publicly dependent underclass along with most people of color. The New Nationalism is deeply invested in a "bootstrap ideology" of America, built on private property rights and individual responsibility. The New Nationalists overlap with Christian Nationalists on some beliefs, but have little in common with Unhyphenated Americans. Communities broadly exhibiting these inequalities are most common in the Corridor from New York to northern Virginia , though they occur as suburban counties of nearly every major metropolitan area in the U.S.

What it Means for Others. These three concepts of American nationalism share several features. They introduce an identity component -- wealth, or ethnicity or religious identity. They overlap with each other, largely through Protestant evangelical identity. And, they contrast against "out groups" that are growing in the U.S. -- the secularists, immigrants, non-Caucasian ethnics and Muslims. Conflict in the GOP arises from the growing voices of white identity and Christian identity, versus efforts by the economic conservatives who populate the New Nationalism who seek to co-opt elites from non-white ethnic and racial groups.

The major victim of this new politics of competing forms of American nationalism a national consensus most recently observed by social scientist Alan Wolfe. At the end of the Clinton Administration, when political polarization had exploded into full flower, Wolfe wrote in his book One Nation After All that there was a broad-based consensus of tolerant belief across seemingly different American communities. This consensus has not survived the downward mobility of the white working class. The white working class is heavily populated with Christian Nationalists and Unhyphenated Americans. Its members are upset at the loss of an American Dream that was taken for granted by their grandparents and are threatened by future in which they will be an ethnic minority.

It is in this sense of loss that Donald Trump's call to "Make America Great Again" finds its resonance (see also here). More to the point, the question of the American nationalism will lurk just beneath the surface during the 2016 presidential campaign.

(We've included a figure showing the overlap of these groups, and also a highly subjective placement of the major remaining GOP candidates in respect to those groups, so that as you listen to the candidates, you can think about the rhetorical and attitudinal territory each player has to cross to attract and accommodate different types of nationalists.) 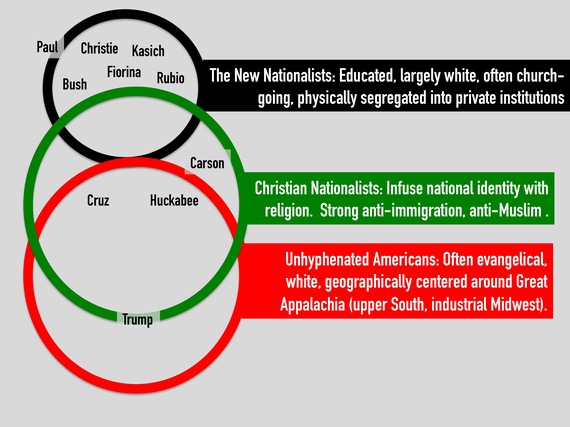