It's nearly Veterans Day, that time of year when we remember we have veterans. As a reminder that we also have war, the headline in my local paper recently read, "US pledges to send 50 special-ops troops to Syria." Turns out it's not our first such foray into Syria, but it's news because we're now acknowledging those boots on the ground.

Fifty is a tiny number, more symbol than strategy, or maybe place-holder for whatever comes next. It could be that these 50 special forces will stem the tide of slaughter in Syria, pack up their tents and go home, but more likely, they're the camel's nose in the tent. Defense Secretary Ashton Carter suggested as much when he told reporters, "We're going to continue to innovate, to build up what works." What works, huh? Like the plan to train 5,000 "moderate" Syrian rebels? Not surprisingly, we had trouble finding many people who fit that job description and ended up training perhaps 100. At last count, there were five, max, fighting ISIS. As Peter Van Buren, a State Department whistleblower and writer, likes to say, "What could possibly go wrong?"

The responses to the announcement were predictable. In a widely quoted statement, Sen. John McCain complained, "Such grudging incrementalism is woefully inadequate to the scale of the challenge we face..." Politicians in both parties tended to agree that the tactic won't accomplish much, but Rep. Jim McGovern was typical of Congressional "doves" in taking the opportunity to push for a renewed authorization of war. (Obama asked for one last winter, but Congress has yet to take it up for debate.) "Sending troops into harm's way," McGovern said in a statement, "is a decision that must be made by the American people through their elected representatives in Congress."

Strategy, legality, real politik... I may have missed it, but if anyone in Congress questioned why we're messing around in Syria and environs in the first place, they weren't doing it very loudly.

Welcome to The Great American Perpetual War, where one conflict morphs into another with only ceremonial endings at best. Veterans Days was originally Armistice Day, a day to celebrate peace. We may fancy ourselves a peace-loving country, but we maintain about 800 military bases around the world and we have been at war for over half of the past 50 years - and that's not counting off-the-record incursions into countries like Angola or Haiti. 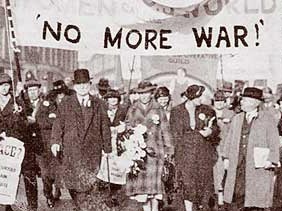 I gave a talk recently at the William Joiner Institute for the Study of War and Social Consequences at UMass Boston. It's a lively place, where veterans and victims can learn and talk about the human, social, political, and environmental fallout from war. The audience was lively too: students, faculty, and veterans from Vietnam onward.

The older veterans were mostly members of the local chapter of Veterans For Peace, a feisty bunch who, contrary to expectation, have become more radical with age -- although what constitutes radical these days is open to debate. They jumped in to correct a student when he considered, in passing, how Iraq differed from Vietnam -- same war, more sand, they said - then got down to what they really wanted to talk about, which was American imperialism (an outmoded term, but not an inaccurate one) and the knee-jerk response that every international problem is a military one -- to be resolved, of course, by the United States.

Why, one asked, do we praise so many people doing often ordinary things as "warriors"? Why this American tendency to turn everything into a war? There's the thank-you-for-your-service syndrome and the Global War on Terror. (Obama moved to retire the name early in his presidency in favor of unnamed wars against equally ghostly enemies.) Long before 2001, however, we were fighting wars on cancer, poverty, and drugs -- another quagmire. War as metaphor or trope so pervades our culture that it's almost impossible to talk about public, or private, interactions without resorting to militaryspeak. When I found myself talking about fighting for peace, I knew that battle was lost.

A former student stuck around afterwards to chat, saying apologetically that demonstrating against war just wasn't something he worried about. He worried about getting a job, a girlfriend, an apartment he could afford -- but war? Not really. Who can blame him? I mean, what war would he demonstrate against? Fifty special ops forces are the stuff of Hollywood movies, not a reason to take to the streets.

Which is the utility, maybe even the genius, of perpetual war: we're so used to it, we don't notice. We're more or less instructed not to notice, instead to "enjoy America's great destination spots," such as Disney World, as George W. Bush advised in the wake of 9/11. When we do notice, we throw up our hands in despair. And who can blame us? Syria, Afghanistan, Islamic State, Gaza, Ukraine, Mali, all those budding terrorists growing at home or flocking to countries in turmoil. Terror is terrorizing, whatcha gonna do?

Maybe nothing? Maybe really no boots on the ground, no special operations, no bombing raids, no drone strikes, no threats blown out of proportion? And maybe, instead, acknowledging that there are some conflicts where we have no role? I don't know what would bring sustainable peace to Syria and the surrounding countries where violent upheaval has become the norm. I do know that what we've been doing there all these years has made matters worse. So maybe, just maybe, the right thing for us to do now is to butt out.

Until that happens (Is hope as distant as peace?), I wish a Happy Veterans Day to our veterans, because it's guaranteed that there will be many more of you to celebrate or mourn for a long time to come. War, after all, is our most reliable growth industry. 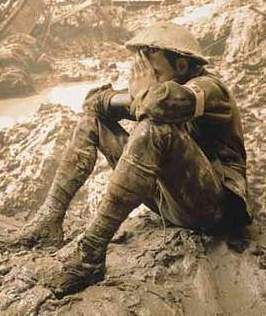