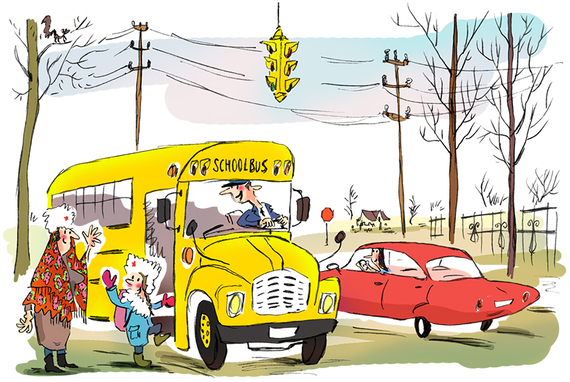 Every morning school buses wind like a long yellow ribbon around the country. On every corner in every city, children of all ages, often with their parents, stand in clumps, waiting for their buses to arrive.

School buses hold America together. All children who do not live near their school are entitled to a free bus ride to school and back home. From Palm Beach to Pismo Beach, they have the same glossy yellow color, originally called National School Bus Chrome. All told, school buses are a logistical operation of vast size, by far the largest transportation system in America. A total of 480,000 buses transport 26 million children every day. Slowly starting and stopping, they grind out about six million miles a day. They're everywhere. Even if a child is in a foster home, or in a homeless shelter due to circumstances, he or she still has the right to go to school.

School buses are one authority all Americans obey. When a bus stops, a mechanical red stop sign suddenly pops off to the side, like a warning hand. You may not pass this bus under any circumstances, in either direction. And that's a good thing. Children dash unpredictably across the street from behind the bus, tripping on their untied shoes and spilling books from their backpacks

Even after they wave good-bye, some helicopter parents still hover overhead, thanks to Here Comes the Bus, an app which tracks your child's bus route every minute. Children of less nervous parents learn to solve their problem their own way. Last week, a neighbor's boy knocked on our door and told us that he had that missed the bus and his parents had gone to work. He pointed to his heavy satchel and asked politely if I would please drive him to school.

Inside, the buses are bare with hard plastic benches. "It rattles," says my daughter. "The driver is always grumpy and yells at us. The really cool kids sit in the back. The ordinary kids in the middle. And the shy ones up front." Of course she and her friends always fight for the back seat.

But that happens less often now that she has her beginner's driving license. She drives while I ride beside her, slaloming through our neighborhood streets. She waves happily to her BFF's who are waiting by the side of the road. First, we pass two sisters who play a game with strings between their fingers, the same one I used to play in the Netherlands. A little farther away, little kids frolic on the sidewalk while their mothers watch them anxiously. On the next street are a couple of guys holding big sports bags, helmets and sticks. These are young gladiators who play on the lacrosse team. They stare coolly ahead.

On the way I drive past our new Russian neighbors. The girl, seven years old, and her mother have just moved from Moscow. They barely speak a word of English. In recent weeks, in Indian summer, they were sitting together on the grass, flipping through a picture book. Yesterday I saw them counting the rings around the center of a sawed-off oak stump. Today, when the first frost glazes the grass, they both wear the same white hats. They remind me of two Russian nesting dolls.

I wait while the school bus creakily stops, wheezing and shuddering, and the girl climbs aboard. The mother waves at her. As the bright yellow bus drives off, I can see the Russian girl's white fur cap through the rear window. She begins her journey in the backseat.

More:
ParentsChildrenpublic schools
Newsletter Sign Up
Raise the kind of person you'd like to know
Subscribe to our parenting newsletter.
Successfully Subscribed!
Realness delivered to your inbox