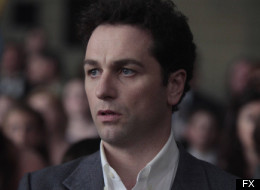 Note: Do not read on unless you've seen the premiere of the FX drama "The Americans."

First things first: All hail Fleetwood Mac. If watching "The Americans" didn't make you want to listen to "Tusk" on an endless loop, then I don't know what ails you. The use of the song in this show made me long for an episode in which the USC marching band parades down the Jennings' street, playing the hell out of the early-'80s classic. I can only hope FX has considered that possibility for the season finale.

In any case, I wrote in my review that I really liked "The Americans" and I thought the cast was generally outstanding. I've also seen the second episode and I'm eager to see more.

Having said that, I had some issues relating to the time frames depicted in the first episode. It's really a generalized feeling about how long Philip and Elizabeth appear to have known each other versus how long the show tells us they've known each other, but I'll try to break down that general sense of "wait, what?" into specifics.

First of all, in the flashback to Keri Russell's character Elizabeth in 1961 and glimpses we get of her in 1981, she looks very much the same. It looks as though the director and the DP tried a few techniques to have her appear to be different ages, but to my eye, they didn't really work: Keri Russell looked like Keri Russell no matter where and when they depicted her, so I was distracted from the information we got from the flashbacks by the fact that the character looked the same in time frames that were allegedly as much as 20 years apart.

And why cover a span of 20 years for Philip and Elizabeth? That mystified me as well. First of all, given how youthful Russell looks, she comes across as a woman barely in her mid-30s (Russell herself is 36 years old). Let's accept that Elizabeth was 17 or so in 1961, when we saw her in KGB training. That would make her around 37 in 1981. Not a huge issue, I suppose (it's right in the ballpark of Russell's actual age), but for some reason I find difficult to articulate, I just found it distracting to learn that Elizabeth (and presumably Philip) are both 20-year KGB veterans. I suppose that would account for their skill and resilience, but they both read as younger than that (much of the show's drama, after all, hinges on their doubts, fears and hesitations. Those doubts certainly would accumulate over time, especially given that they're far from Mother Russia, but does either one look or seem like a middle-aged KGB operative? Not quite).

I also found the length of time that Philip and Elizabeth have known each other just a little distracting. If they married in the mid-'60s, then they have been together for at least a decade and a half. Wouldn't the ground rules of their relationship, physical and otherwise, have been established long ago? Wouldn't Philip know not to get close to her in an affectionate way, as he did in the kitchen? Wouldn't they both know more or less where they stood in terms of love vs. work? Even if their relationship has been essentially a professional one until now, wouldn't they know each other quite intimately just from having been in each others' presence all these years?

Not all of those elements of the story gelled for me, and the backstory didn't quite help me understand why Philip fell for Elizabeth. Don't get me wrong, Matthew Rhys does a great job of playing a man experiencing tormented, unrequited love, but it'd be great to see how he fell for her despite her very clear signals that he should not do so. (Perhaps her coldness served as a lure, in which case that's an interesting area for the show to explore in future episodes.)

I also understand that the fact that Elizabeth was raped all those years ago had a huge effect on her psyche, and once Philip killed the rapist, she was able to feel safe and protected in a new way, thus she was able to open up about her past and tell him her real name, etc. But as I watched the premiere, I couldn't help but wonder about their 16 years in America -- it really took her that long to trust this man? Again, a big part of the show is seeing their own internal Iron Curtains falling, but I wonder how they could have known each other this long without at least part of that process beginning earlier. I mean, this guy is played by Matthew Rhys -- maybe it's me, but I can't help but think well of him from the first frame.

As I said in my review, I think part of the reason their marriage took place when it did was to give the Jennings older kids (a show about spies who are the parents of toddlers was never going to air on FX). A lot of the quibbles that I've raised about their relationship would go away if these two met in 1975 or 1977 or something like that. That kind of time frame feels more in tune with how they're depicted at the start of the show.

But to give "The Americans" deeper emotional stakes, the Jennings needed to have kids, and to make the kids older, they had to have met in the '60s, thus it felt as though the time frames were imposed on the characters in a somewhat awkward way. These are structural concerns that won't matter if the show does things right over the course of Season 1, but I thought these points were worth raising. If the progress of Elizabeth and Philip's relationship proves compelling from this point forward, then all of these factors will likely be non-issues going forward.

Another point worth raising: Holy hell, that's one mother of a coincidence that a counterintelligence agent assigned to the Russians moved on to the Jennings' street. The pilot was generally so strong that didn't bother me. Contrivances only matter if they impact characters in unfortunate ways and if they're done for dumb reasons, but that certainly wasn't the case here. Without that coincidence, there's no show and there's no Stan Beeman, and considering how great Noah Emmerich is as the nosy FBI guy across the road, I'm totally willing to let that slide (again, on the assumption that the show will make it worth my while to do so).

All that being said, this was a strong pilot, one much more able to establish nuance, tone, atmosphere and character than a 42-minute pilot would have been able to do. The pace, the action and the performances were compelling, and I look forward to the arrival of Margo Martindale in the third episode (the second episode, which I've also seen, generally builds on the strengths of the pilot). This is an interesting new drama with lots of potential, and Rhys, Russell and Emmerich are compelling right out of the gate.

I've got a few other thoughts I've put into the list below: