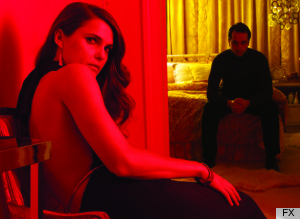 The creepy realization that, to put it in horror-movie terms, the call is coming from inside the house, has been more and more prominent as of late on television. That understanding therapist on "American Horror Story"? A serial killer. That regular guy from the neighborhood? Chances are he's been turned into a vampire, a werewolf, a zombie, a meth dealer, a Lannister or a terrorist. Your brother, the demon hunter? Someone removed his soul.

Secrets have always been part of storytelling, but from "Breaking Bad" to "Supernatural" to "Homeland," television has made a hard turn toward the realm of painfully intimate betrayals in recent years. People who should be close end up turning on each other, and -- even scarier -- sometimes they have to stand by as a loved one is transformed into an unrecognizable thing.

In this brisk period drama, which may do for Guess jeans and boxy cars what "Mad Men" did for slicked-back hair and narrow-lapel suits, Keri Russell and Matthew Rhys play a matched pair of Soviet operatives living on an idyllic street outside Washington, DC in 1981. In the pilot's bravura opening sequence (which should send a classic Fleetwood Mac sequence shooting up the iTunes chart on Thursday), the spies are in full-on "Three Days of the Condor" mode, but soon, they're baking brownies, going to the mall and checking on the kids' homework.

But their laundry room holds more than just a Harvest Gold washer-and-dryer set: Philip Jennings (Rhys) occasionally heads in there to fiddle with illicit electronics, and he and his wife, Elizabeth (Russell), also hold hushed conferences about tradecraft among the baskets of laundry. And instead of heading out on a date night, they are more likely to drive into the city to menace a terrified contact whose help they require to complete a mission.

Betrayal and deception are as much a part of their lives as hockey games and shopping: Both operatives have to sleep with assets on occasion, and Rhys, whose face has an extraordinary ability to register melancholy and longing, does a fantastic job in a scene in which he listens to a tape of one of Elizabeth's work-related encounters. He's both saddened by what he hears and angry at himself for caring too much about his spouse. Are they so lacking in sustained intimacy that she doesn't even rise to the level of being, in modern parlance, his true "work wife"?

Philip and Elizabeth are required to work together, but they aren't required to love each other, and their feelings toward each other are a complex and evolving mixture of duty, misgivings and affection. That makes the Jennings like many other suburban couples, and thus they're not all that hard to identify with. Their second jobs as spies punctuate their humdrum lives with illicit thrills, but the wigs and false personas come with an array of emotional costs that probably weren't spelled out in the KGB recruiting brochure.

Philip's situation is particularly poignant: He's developed deep feelings for both Elizabeth and the American way of life, but he must keep those aspects of himself in check in order to keep his family safe and their missions on the right track. This is no time for him to waffle on the glory of Mother Russia: The show is set just after the election of Ronald Reagan, whose Evil Empire rhetoric helped reheat the Cold War, and the couple's bosses expect big things.

If "Argo" gave you a yen to see great character actors wear mustard-colored clothing and play beleaguered intelligence types, you should definitely give "The Americans" a sustained try: Noah Emmerich, in particular, is terrific as a new neighbor who becomes suspicious of the Jennings. Emmerich's character, Stan Beeman, has a fascinating way of saying innocuous things in a genial manner that is ever-so-vaguely threatening; he and Rhys have several fake-nice encounters full of delicious layers of doubt, blandness and suspicion. Richard Thomas is this show's Saul Berensen: He plays a steady, dedicated professional who makes sure bad guys don't get to run around America unimpeded by US intelligence operations.

Critics were sent the first two episodes, and I was going to keep watching anyway, partly because Elizabeth and Philip are so good at deceiving everyone, partly because Rhys and Russell do a fine job of showing the cost of those deceptions, and partly because both are surprisingly convincing in their action scenes. But knowing Margo Martindale, formerly of FX's "Justified," will recur this season (she turns up in the third episode) is one more reason to put "The Americans" on the must-watch list.

The first two outings of "The Americans" neatly set up a host of possible betrayals and alliances, personal and professional, and while it's a thrill to see Russell's steely side (Elizabeth is usually more pragmatic than her husband), it's Rhys who is a revelation in the early going. There's a scene of Philip looking at his sleeping son that is heartbreaking; it's one thing to think about betraying your country, but the idea of betraying a 10-year old -- it just doesn't bear contemplating.

The only things that were jarring in the otherwise well-made opening episodes were some elements involving time frames and flashback sequences. I'll go into my thoughts on this in more detail in a post that will go up after the premiere (Update: That post is here), but I'm guessing the show's creators wanted to give Philip and Elizabeth children who weren't very young (and I'd bet they wanted at least one teenager), and it seems to me that the dates of the agents' training and marriage were awkwardly forced into that timeline. And the entire premise hinges on a big coincidence, but viewers will forget about that if "The Americans" gives them ample reason to do so, and it's well on its way to doing that.

Having said that, I wonder: Will the fact that we know about the outcome of the Cold War and the breakup of the Soviet Union eventually drain the proceedings of some tension? It's not too big a worry, given that this show is more concerned with individual soldiers on the front lines of the Cold War than with the grand collision of governments and ideologies.

Like "Homeland," a show to which "The Americans" will be inevitably compared, and like AMC's late, lamented "Rubicon," the FX drama is about those whose jobs require them to know too much and balance an impossible array of competing demands. Whatever their beliefs, nothing comes easy for them, not least their desire to be truly known by those closest to them.

Note: The first episode of "The Americans" runs for at total of 97 minutes; set your DVRs accordingly. Also, return here Wednesday night for some post-premiere thoughts about the new drama. Finally, in the Talking TV podcast below, Ryan McGee and I discuss "The Americans" and Netflix's "House of Cards," which arrives Friday. The podcast is also available on iTunes.

"The Americans" premieres on Wednesday, January 30 at 10 p.m. ET on FX. UPDATE: The entire first episode, which runs about 69 minutes, is embedded below, and, after you've watched it, my post-premiere thoughts are here.