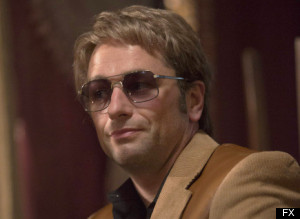 In its first season, "The Americans" (10 p.m. EST Wednesday, FX) was an "almost" show -- it appeared continually on the cusp of ascending to a higher level of quality.

That's not to say the debut season of the show wasn't fun: Stars Keri Russell and Matthew Rhys were terrific from the get-go, there were epic wigs and the drama managed to be entertaining and evocative a lot of the time. But the show about Russian spies hiding in plain sight wasn't as assured, varied and consistent as it is in its second season.

That's another way of saying, holy Mother Russia, you need to be watching "The Americans." Very few shows are able to combine pleasurable episodic storytelling so deftly with solid character building and delicious suspense, but the first five episodes of the new season do that with style, not to mention period-perfect wigs. What more could you possibly want from a television program?

Though TV is generally in fine fettle these days, most commercial, mainstream entertainments on TV aren't this morally and intellectually juicy. One of the few others I can think of is FX's long-running "Justified," and as is the case with that drama, "The Americans" has a pleasant zip and vigor without the "look at this great writing" pomposity. These are shows with generally smart construction and a high level of craft in all arenas that are somehow also modest and self-effacing: They want you to have fun, and if they pick up some acclaim and awards along the way, that's cool, but beside the point.

To be clear, this show does need to score some awards, particularly in the acting department. The casting for this show could have gone wrong in so many ways: The central duo, Reagan-era Soviet spies Philip and Elizabeth Jennings, have to become many other people in the course of their various operations, and there aren't many actors who could pull off that kind of range -- and occasionally display murderous intensity -- and remain likable and sympathetic. Given even more emotionally and intellectually complicated scenes to play this season, Rhys and Russell rise to challenge and then some.

The need for versatility can't be overstated. During one mission, Elizabeth has to play a fragile, wounded woman who has undergone a terrible ordeal, and as she plays this invented character, you slowly recall that during her training, Elizabeth (real name: Nadezhda) actually experienced a similar assault. It's that interplay of truth and lies that keeps "The Americans" vibrating at a high pitch: Quite often when these spies are lying, they're exposing their deepest truths.

And it's not just Elizabeth who briskly tries to keep a host of contradictions from spinning out of control: This season, almost every character has divided loyalties, and that keeps things fresh and spontaneous. When people subscribe to one belief system or set of loyalties but more tantalizing alliances and ideas come along, who's to say which way they'll jump? Even they may not know.

This season, even more so than last, Elizabeth and Philip are forced to confront the possibility that their handlers care very little about the one real thing they've got: their kids. A lot of shows try to depict the challenge of maintaining a work-life balance, but in "The Americans," the stakes are literally life and death. The kids don't know that, but they're curious: Daughter Paige (Holly Taylor) knows something weird is going on in the laundry room and it has nothing to do with the spin cycle.

The show can pull off action scenes with bone-crunching panache, but in the main, "The Americans" doesn't go overboard. It can set a mood beautifully with a deep cut from Peter Gabriel, and its cast can usually supply what's needed without even speaking. Russell's eyes can convey the ferocious desire to protect what's hers, and yet the show also is willing to have fun with the droll comedy that Philip's other wife brings to the proceedings. He's not a bigamist -- using a fake identity, "Clark" married Martha, an FBI secretary, in order to get intel on American operations. It's a continual wonder that the show manages to wring so much dry comedy from the Martha situation, and yet the writers never make Clark's long-suffering fake spouse feel like a worthless dupe or a laughingstock.

It helps that Rhys has a quality of wounded melancholy that feels especially appropriate for a Russian character. Philip's eyes often seem to say, "What is the point of any of this? Never mind, onward." Rhys has to be convincing as a man who can cold-bloodedly murder a contact if necessary -- and as the man who sits in his car afterward, twitching and stunned. His devotion to his wife is one of the few things keeping him grounded, and the chemistry between those characters throws off sparks in many scenes, especially an exceptionally saucy scene in the season premiere.

One fear Philip and Elizabeth share is the potential moral degradation of their children, who are surrounded by the heedless culture that produced Tab, "Hill Street Blues" and French-bread pizza (all of which get loving nods in the second season). They fear that either organized religion or materialism will seduce their kids, even as the righteousness of the Soviet cause begins to seem like an abstraction in their own minds. It's easy to identify with their fear over what their kids will become; what adds a scary frisson is the knowledge that if something goes wrong, they might not be around to witness Paige and Henry's wonder years.

Speaking of religion, the audience for this show can be united by one faith -- the one that prays for the demise of the dopey CBS sitcom "The Millers." Margo Martindale, who is stuck on that show, was born to play Claudia, the tough-as-nails, old-school Russian operative who makes a brief appearance in Season 2. Her frenemy chemistry with Russell is one of the most magical things on TV, and we can only hope that Claudia returns later in the season.

Still, it's not as if the show is hurting for juicy, conflicted relationships. FBI agent Stan Beeman (the wonderfully understated Noah Emmerich) continues to have a clandestine affair with Russian embassy employee Nina (Annet Mahendru). Neither one of them is entirely sure to what extent they're being played, but it's a treat to watch Nina become harder, colder and more manipulative. Will Oleg, the wily new operative working at the Soviet Rezidentura, be able to win over her calculating Russian heart and mind? Only time will tell.

A few aspects of the show feel a little undercooked: Stan's home life is, unlike Philip's fake mustaches, sparse and unconvincing, and though Richard Thomas plays Stan's boss with engaging brio, the rest of the FBI side of things feels a little bland. The remainder of the season may fill in these aspects in pleasing ways, but the good news is, there's no reason to think the rest of Season 2 will be any less enjoyable than the first five outings.

Ryan McGee and I discussed "The Americans" and "Hannibal," along with three new comedies, on the most recent Talking TV podcast, which is here, on iTunes and below.