I'd never been to a dirt track before. Tri-City Speedway in Granite City, Illinois was the first. I was never much into NASCAR. I used to see the country boys in prison sitting in front of the Sports TV for 5 or 6 hours at a time watching the race and couldn't fathom what the appeal was. But those boys would fight to watch that race every Sunday if it came down it. I felt the same way about football, but watching races was never my thing. 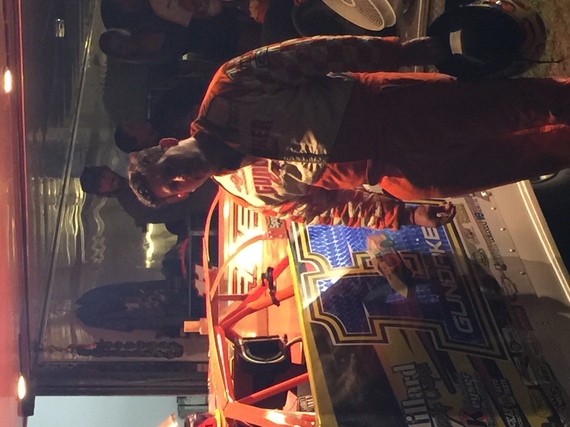 If not for a movie I was acting in, Dog Days, where I was playing a race car driver, I would've never been at this track. But in retrospect, I have to say it was quite an experience. I got to meet the drivers, hang around the pits and just soak in the atmosphere as we shot the film. I listened to the drivers talk as they schooled me on the life of a dirt track racer. One was Gordy Gundaker, a 23-year-old from St. Charles, Missouri who drove car No. 11 and whose family owned the track. The other was Bobby Pierce, an 18-year-old kid from Oakwood, Illinois who raced car No. 32 and was known as the Smooth Operator. 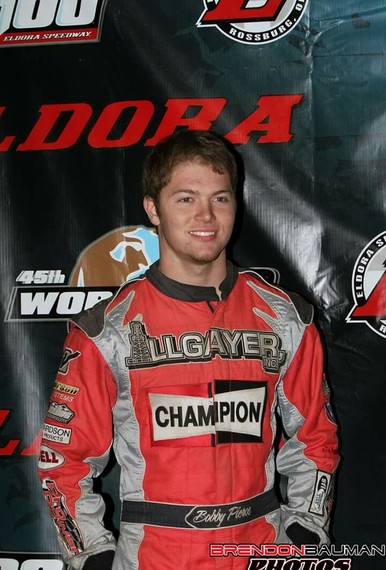 Bobby was like the prodigy of the track. He was engaging, very well liked and hungry to win. Locals talked about how he was destined to go to NASCAR. Just like a race car driver who drove at Tri-City Speedway 30 years before by the name of Jeff Gordon. Not a bad comparison for the young racer whose dad builds engines and works as his crew chief. Tri-City was just another track to Bobby, one of many he would forge victories at as he criss-crossed the nation trying to win purses.

Gordy was more the mainstay. A laid back driver who didn't win every race like Bobby did, but finished high enough to make it interesting. He was a calm, cool and collected character who took every race for what is was. You have to understand that racing cars isn't like football or basketball where you have one winner or one loser. It's you against a whole bunch of other drivers and everyone is trying to win. It's like Ricky Bobby said in Talledega Nights, "If you're not first, you're last."

Being out there on that dirt track taking the corners at a 100 mph and sliding through them sideways, seemingly ready to flip over, you have to be a little ballsy. Gordy told me:

I race because I'm a competitor.There's nothing better then strapping into the car knowing I'll be out there with 23 other drivers who want to win just like I do. Racing is in my blood and I wouldn't have it any other way.

As an actor playing a race car driver in the film I was granted all access to the track, pits and behind the scenes action. It was different than anything I've ever experienced before. The smell of the gas and sound of the engines. The drivers hanging out between races smoking cigarettes and who knows what else. The dirt and the mud and the four wheelers everyone whips around on in the pits. And the girls. Don't even let me start.

These dudes are like rock starts for real. With their race cars and their trailers and their RV's. A roaring engine of horsepower that they corralled into a drive shaft powering them forward on the track. Being in the pits was like being in the eye of the storm with everything in constant whirling motion all around you. New heats were starting, races ending, the crowd cheering over the screaming motors. The drivers taking their cars back to their trailers. The mechanics and pit crews making adjustments, changing tires and gassing up the cars as the drivers talked about what they did wrong or right or didn't do at all during the race.

Bobby Pierce was taking it easy during the heats. Doing just enough to qualify, but in the main feature he turned it up a notch and lapped several cars on his route to victory. He told me:

At a show like this there are only three heat races. As long as I finish in the top two or three I know I have a pretty good starting spot for the feature, so I wasn't really too worried about the heat races.

But Bobby admits the competition is fierce, as every car is grinding and trying to get position to make their trip to victory lane easier.

These races, the competition is so tough. You have to start up front and if you don't start upfront it's hard to get to the front. I'm a little more relaxed and calm when I can start up front. I personally like when the track is a little bit slick, early on it's really fast and there isn't a whole lot of passing going on and later on throughout the night the track got more slick and you could move around on the racetrack go to the bottom, go to the top, even shoot through the middle.

I watched all of Gordy's and Bobby's races. When you have someone to cheer for it seemed make the race that much more fun. I stood on the side of the turn, a stone wall and high fence separated me from the track. This was from the pit side away from the stand where most spectators watch the race. As the cars made the turn, literally sliding sideways through the curve, I got a face full of dirt. I learned to duck behind the stone wall when they entered the turn, but still my hair was full of dirt. 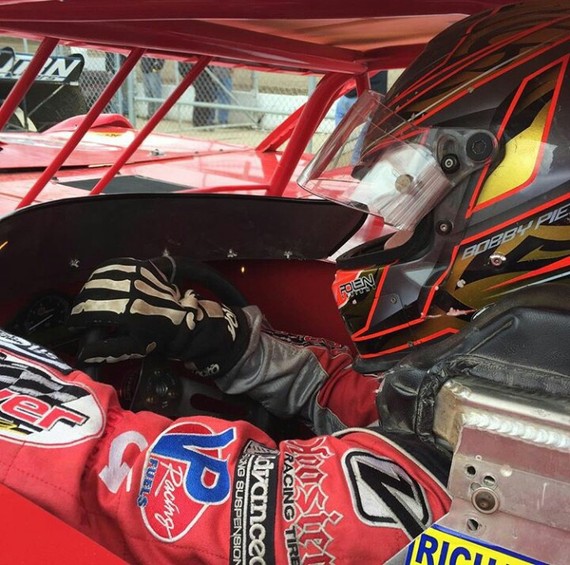 After the cars sped out of the turn they would straighten up and bolt toward the wall on the outside of the track like a demon freight train intent on crashing into the wall. But they never did. In a matter of seconds they were back in the far turn, sideways again, with the inside front wheel lifting off the track as they keep the car sliding through the turn at top speed. Bobby explains.

That goes back to how you want to follow the parts of the racetrack where there's moisture because that's where you get the best traction. Turns three and four at Tri-City on the bottom are really fast. I'm trying to keep my left side tires in that moisture, then I can come out of it and hit the gas. Shoot right to the wall and have a big old arc for the next corner whether I went high or low.

It's like being fired from a sling shot out of the curve and then having to skid through the next curve at top speed and then doing the whole thing again and again and again. Not for the feint of heart. I can't help but thinking to myself, wtf does it feel like? Gordy tells me-

It's an experience different then anything I could ever describe. The adrenaline rush is through the roof. We're racing at high speeds inches from others cars, inches from the wall, and all being side ways throwing dirt. There is nothing else like it. 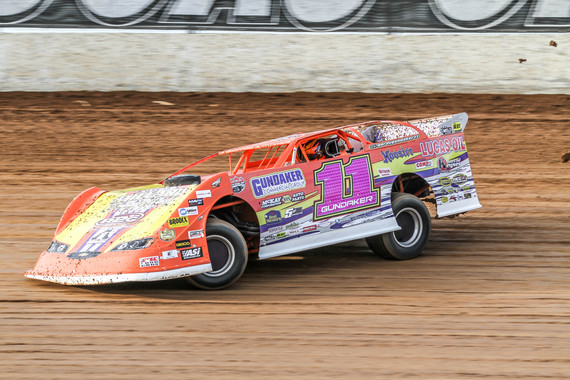 The technique and skill involved in the handling of the car on the dirt track amazes me. NASCAR drivers go extremely fast, but they're not completely sideways on the turns, subject to flip and barrel roll into, through or over the wall. Bobby explains-

A lot of people that have never really drove a race car or had that experience don't know all the little techniques that it takes to race on dirt is different. One of the major keys racing on dirt is to look at the race track and to see where the moisture is on the race track. Because when you hit the slick spots on the racetrack its like hitting black ice and the car will slide. You want to hit the moisture. There's a big difference in dirt racing because when the track is fast you drive way different then when the track is slick and slow.

I can tell you that I wouldn't want to drive one of those cars. I am all about adventure, but trying to tame one of those machines that generate like 800 or so horsepower is beyond me. The cars, which they call modified, are all engine and suspension and tires with just a metal shell around it, mainly for sponsors names. And the dirt track racers are one with their cars. Sliding in and out the window, reattaching the steering wheel and belting in. It's like being in a little time capsule built for speed. It's not a hobby for these dudes, they are serious. Gordy tells me why he races:

Racing is everything I have ever known. I grew up in it and without it I don't think I would be the person I am today. It's a lifestyle. I sleep, eat and breathe it. This is a job all in itself and you get out of it what you put in it. As the night goes on adjusting to track conditions can be tough. The race track is constantly changing so keeping up with it to make sure we give ourselves the best chance possible to walk away at the end of the night with that trophy never gets any easier, but it's why we love it, for the thrill of winning.

Twenty something individuals all competing for that one spot in victory lane. Preparation is everything for a dirt track racer. They spend numerous hours throughout the week and on race day getting the car maintenance done, mounting and cutting tires and getting their engine in gear so that when race day comes they are ready to go. Because even though it's not NASCAR, the stakes for these gentleman are real.