Hurricane Sandy hit New York City two years ago today. My fellow New Yorkers woke up to a world ripped up and watered down: trees and tires on sidewalks, buzzers and front doors black, open to whatever guest cared to wade in the water of the streets and up to their apartment. Friends slept with flashlights, other friends, and prayers. I woke up then, as now, with the type of damage you can't take a picture of: My mother died five years ago today.

October 29, 2009: A date smack at the end of Breast Cancer Awareness Month, named for the disease that killed her. Five years later, my to-go coffee is served in pink Styrofoam and the credit card machine at the pharmacy asks me if I want to donate to cancer awareness every time I buy a toothbrush or a pack of gum.

October 29, 2009: A date right on the cusp of Halloween, when fake graves dot front yards and the dead walk the earth in bad zombie costumes.

I lay in bed this morning and thought maybe I don't need to get up today.

But then I made a cup of coffee, and as its warmth kicked in, I felt my heart racing beneath my ribcage and knew that I would.

Two years ago today, the New York Stock Exchange suspended trading. A building collapsed near Union Square, its front walls sliding off like they were made of sand. More than 100 homes went up in flames in Breezy Point, Queens.

Five years ago today, I stood over my mother in a hospice bed and tried to breathe for her, a messed-up Lamaze in reverse. I wrapped my fingers under my mother's calves to help the nurse turn her; her ankles were turning a strange purple-gray.

"Her feet will feel cold," the hospice nurse tells me. "Blood leaves the extremities first."

My mother is lighter than I ever thought the woman who gave birth to me could be. Pressed against my arms, I can feel her heart pumping through her lopsided torso, the right side rising and falling, the left staying sunk where her breast used to be.

Mom's breathing is getting louder now, every intake like a diver's who has just burst through the surface of water, filling his lungs before diving back down. She's struggling to stay above, gulping, rattling, her eyes darting around the room.

My fingers find her ankles. I hold on as if I could anchor her to this world. Only one eye is working now, and it circles the room. She takes in her mother. Her brother and sister-in-law. Her youngest daughter. My father. Me. I hold her gaze and stare into her face, no longer frightened.

My mother's focus drifts to the skylight above her bed, an October sky so blue it seems to fill her iris to bursting.

When I look back down at my mother, she is already gone.

I leave my wailing grandmother and my father kissing Mom's dead forehead and my sister staring at my father, still holding his wife. I walk and walk until I realize I am standing in front of the hospice nursery.

A hand taps my shoulder, and I barely find the energy to turn around. It's my cousin's wife, arrived too late. Her 6-month-old blinks up at me from against her chest. I don't say anything; I just open my arms.

Bending down to kiss the baby's forehead, I try to lose myself in that smell of soap and baby shampoo and skin.

She will never see me do this. I don't know how to do this.

It will be the first of many times when I realize what it means to lose a mother.

The image I remember most from all the coverage of Hurricane Sandy was one I never got to see in real life, but I feel it like a memory: the image of Jane's Carousel in Dumbo, brightly-lit painted horses trapped behind glass and the water rising, fast.

I walked by it on a recent, sunny weekend. The horses still buck and go in circles and children still ride them, the river a few feet away, lapping safely behind the rocks.

I have access to what my life was like before my mother's death: sitting on her lap in the backyard of our house built on 14 acres of an old Christmas tree farm, my neck craned up into the warmth of her chin as we look for shooting stars; her visit to me when I studied abroad in Paris, sharing our first glass of wine as the candles jump and the wax runs down the table in the breeze from the open window; watching her drive away from my first Brooklyn apartment, her stubbled head from chemo just catching the light. Holding her until her heart stopped beating, then discovering mine still did.

The waters rise and they recede. I can't walk certain streets of New York without remembering where I was during Hurricane Sandy, and I'm sure New Yorkers across the city feel the same. For the few people on earth who were in that room with my mother five years ago today, the world has a certain cast.

I will have my mother's laugh, her life, and her death stretching before me for the rest of my days, waterlines pressed into my skin. But where once there was only a memory of the flood, five years on, I'm only just realizing my capacity to keep beating on, one small boat against the current of the past.

With love to Uncle Kim, Aunt Laurie, Chuck, and Morgan. 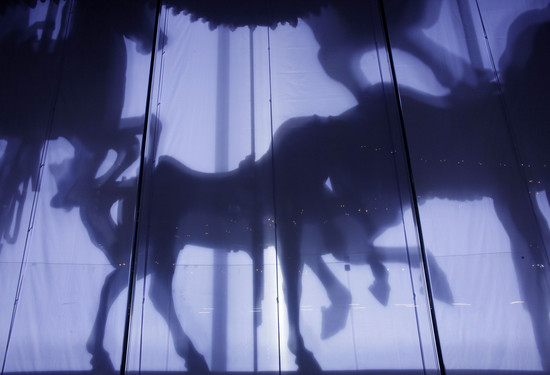