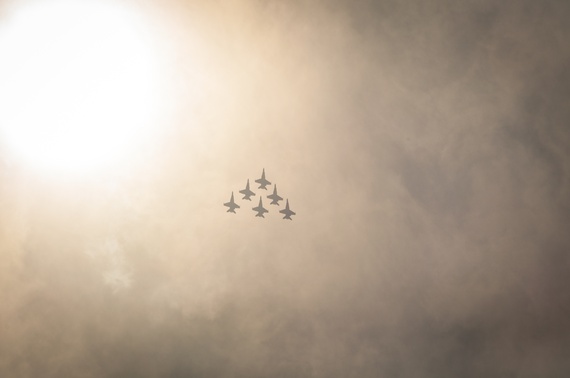 Attorney General Loretta Lynch on July 8, 2016 said about the shooting of police officers in Dallas: "The answer is never violence."

I totally agree with the Attorney General.

Why do more than 50 cents of every tax dollar you and I pay on April 15 go to support the military in one form or another? (According to Michael Moore's new film, Where to Invade Next, it has now reached 59 cents of every dollar.)

Can we truly convince ourselves that the world is a better place or that we are safer because we invaded Iraq and then Afghanistan and Syria? Or because we have gun-toting troops in more than 130 countries?

Do we believe that civilian-killing drones are winning the hearts and minds of people anywhere? Or that taking out Saddam, Osama, and Muammar improved people's lives in the Middle East and Africa - or here in the US?

Or that getting rid of Putin will convince the Russian people that US corporations don't covet their oil, gas, iron, tin, lumber and other resources? ("America won the Cold War," I was told during a recent meeting with Russian journalists. "Ever since, your leaders have sent your military to any country that tries to protect itself from exploitation by your corporations. Russia has lots of resources. We have every reason to fear you.")

I am for gun control. Yes, we need much stricter laws to control the ownership and use of firearms. But the gun epidemic is a symptom. It is not the disease.

The disease is a belief in violence as an answer. THE answer. Now is the time to address the disease. It is time to listen to the wisdom in: "The answer is never violence."

During this election year we'll hear a great deal about the size of government. Let's remember that over 50% of our tax dollars goes to support violence.

Want to reduce the size of the US government? Cut the military. Cut the industries that produce drones, armor plates, guns and missiles. Want to end anger and hatred - in the Middle East, our own inner cities, and between countries? Invest in policies that end hunger, economic exploitation, and desperation.

"They" are not the problem. Not the Russians, the Muslims, immigrants, or anyone else. The problem is a belief system - a perception - that we must be tough, that a war, any war, can be "a war to end all wars." Perceptions shape reality. A perception that violence solves problems leads to police shootings of African Americans and sniper shootings of police. A perception that sending gun-totting soldiers into other countries will make things more peaceful frequently leads to increased anger and radicalization, and more violence.

The real solution is a new belief system - a perception - that was summed up by Attorney General Loretta Lynch:

"The answer is never violence."

John Perkins is founder and board member of Dream Change & The Pachamama Alliance, non-profit organizations devoted to establishing a world future generations will want to inherit & the author of the NY Times bestseller, Confessions of an Economic Hit Man. Follow John on Twitter.

Politics News Sustainability Peace Where To Invade Next Love