In a country that is increasingly polarized politically and religiously, it's always a breath of fresh air to encounter a group or a movement that strays from the social norm. Enter the Facebook page/movement "The Christian Left." TCL has gained national and international notoriety as a movement of Christ-following believers that shirk the right-wing political "norm" so commonly experienced within the evangelical community. It's calling card, a mixture of political satire and spiritual discipleship, helmed by four men who believe that the world needs to experience more than the typical Tea Party-esque brand of Christianity that saturates the political landscape. 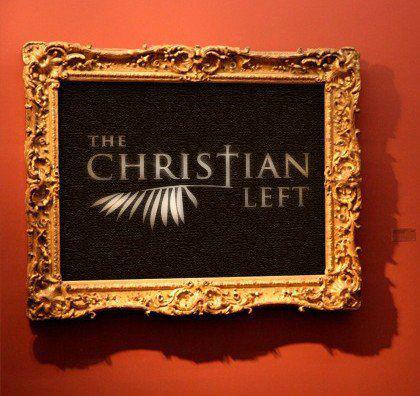 I discovered The Christian Left a year ago, and have watched in awe as the once small Facebook page has exploded to more than 135,000 members! Charles Toy founded the movement in March of 2010 after several conversations with his long time friend Mark Baldwin. Rev. Mark Sandlin and Roger Smith joined as co-founders not long after. I recently had chance to talk with all four of them.

Tim: Gentlemen, can you explain what spurred the four of you begin TCL and what role you see the movement playing in both the cyber and real world?

Charles Toy: I've always been a Christian. Frankly, I was embarrassed by what the public face of Christianity had become. It didn't seem to have much to do with anything Jesus taught. I just couldn't stand to see my faith hijacked by the political right wing. It doesn't fit. I see TCL as a vehicle to let people know they aren't alone if they feel the same way.

Roger Smith: For about 15 years in Southern California I was part of a wonderful church that took a distinct stand against the religious right, and especially against its hypocrisy and judgmentalism. TCL was a natural fit for me, when I discovered it in late 2010. I see TCL helping provide a refuge and voice for others who are tired of the Right.

Mark Baldwin: The Christian Left helps to deconstruct the message many people get from the mainstream media. People now see that there are Christians who actually follow the words of Christ.

What type of impact have you seen since creating the organization and what do you hope TCL will achieve in the coming years?

Charles Toy: We get messages every day saying, "Oh thank God! I thought I was the only one!" I have very high hopes for the future. I'd like to see TCL be a part of a reformation of sorts, back to the actual teachings of Christ. It's hard to go wrong when we're centered there.

Mark Sandlin: Along with Charles' point, TCL has brought folks who felt alone together. That's very empowering stuff. I see us as a very important counter-weight to The Christian Right. Going forward, I see us continuing to bring people together as we work toward caring for all those in need and advocating for equality.

Roger Smith: I'll second Charles, and add that one wonderfully amazing thing for me is that many, many of our TCL friends are nonreligious or non-theist, but who enjoy and support what we do because they support the love that's at the heart of Jesus' message. I hope always to see more of that.

Mark Baldwin: I'll defer to Charles, Mark and Roger on this one. I have had very little to do with the creating of the organization. I just provided some inspiration, got some friends to join and have written a few articles.

I like to say that I'm not afraid of controversy, but often times your content pushes the boundaries in ways I couldn't fathom doing. Is TCL's approach to the conversation intentional or just more indicative of your political and spiritual views?

Charles Toy: It's hard to think of anything more violent and ugly than unregulated plutocracy, the lack of a social safety net, the lack of universal health care, treating gay people as less than full citizens, the phony "War on Drugs," not allowing women autonomy over their reproductive choices, never ending war and the destruction of the environment, to name a few. When we ignore these things the least of these among us languish and die. They're bullied and abused and their lives are destroyed. We're not going to tip-toe around these issues. If folks view that as "controversial," so be it.

Mark Sandlin: In some ways, whether a post is "controversial" or not is personality driven. I'm not likely to post anything that is intentionally shocking, but I have no problem addressing issues head on. I think it is a strength of TCL that we don't have a lot of rules or guidelines about that kind of thing. If you are passionate about a topic and want TCL to talk about it, you just do it -- lead by Spirit rather than committee.

Roger Smith: Is it intentional? Well, we're a bunch of rowdies, nonconformists, and what some may call heretics, in a lot of ways ... a lot of what you see there is just our character spilling over onto the page!

Mark Baldwin: Controversy wakes people up. Controversy is a means to counteract the forces that want you to be complacent and accept oppression and evil. There is a reason that Jesus drove the money changers from the temple. He directly challenged those who profited from corruption.

Will we ever see religion being kept in it's proper place within politics, or do you think the next elections will be even more religiously driven?

Charles Toy: We firmly believe in the separation of church and state. That said, we also believe in ethical laws. There is no better system of ethics than the one espoused by Jesus himself. He didn't say anything about gay marriage or abortion. He said a lot about helping the poor, the sick, the oppressed, the weak, the hungry, the thirsty and the incarcerated. Folks would do well to read Matthew 25:31-46. Jesus defined his priorities leaving no doubt as to what they are.

Mark Sandlin: In many ways, the success of TCL is a sign of the lessening strength of The Christian Right. Unfortunately, I don't think that means we'll see less religious pandering from the far right in the next election. We're going to see more and it is likely to be more draconian and severe as they fight to hold on to what power they still have.

Roger Smith: I see authentic values -- love, compassion, mercy, justice, equality -- becoming more the center of a growing public voice. The Occupy movement has been part of that, many other groups are likewise. I trust God will help that voice replace the loud, arrogant voice of the political and religious right at all levels.

Mark Baldwin: We believe that the majority of Americans share the basic values of Christ. We believe that our laws should reflect those values. An election is the process by which we choose those people who share our values to represent us. Values will always be tied to religious beliefs in a society, or the lack thereof, so religion will always have a place in the electoral process whether anyone likes it or not.

In one sentence, what is the ultimate goal of The Christian Left?

Charles Toy: To let people know there are Christians out their who aspire to follow Jesus, and by doing so to God and love their neighbors. If everyone studied what Jesus actually said and did, and then tried to imitate that, the world would look like a very different place.

Mark Sandlin: To reclaim the name Christianity from those who are using it to manipulate, marginalize and maltreat others for the sake of their own power, profit and prestige.

Roger Smith: I think Charles put it about the most succinctly. As the apostle John put it, "Let's stop just saying we love one another; let's really love one another, and show it by what we do."

Mark Baldwin: For me the goal of The Christian Left is to inspire people to fulfill the Lord's prayer to create a world where every person has their daily bread, where we forgive each others foibles, where nations who now violently compete for the resources of the planet see each other as partners with a common purpose to live in harmony with the earth, the heavenly gift that God gave us.

You can find more information about the Christian Left here.

Internationally Best-Selling Author, 'The Cross in the Closet' & TEDx Speaker