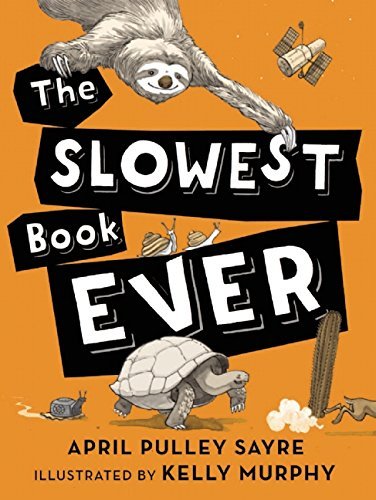 Between instant messaging, fast food, sound bites, over-scheduled activities and frantically distracting video games, when does a kid get a break to stop and think or, at least, slow down long enough to ponder? When they pick up a copy of April Pulley Sayre's latest work: The Slowest Book Ever, that's when! This is a delightfully brilliant middle-school compilation of superlatives on the slooooow side of nature, animals, plants, human body, geology, the arts and a quirky selection of miscellanea including outer space. And what middle school kid can resist superlatives?

Sayre posits that some things require deep consideration over time to comprehend. But this is far from being a ponderous book about pondering. Here's an example of Sayre's off-beat and poetic (not an oxymoron) wit.

Over land, turkey vultures have some of the slowest, least frequent, wing beats of all birds. When they're gliding, turkey vultures may flap only a few times an hour. Their flaps are slow and deep compared to other birds. Just a thought: do turkey vultures need to hurry in order to catch up with a carcass?

And she works hard selling the idea that slowness can enhance a kid's life:

What if, instead of snow days, we had slow days? You wake up one morning and the radio says, "Today has been declared a slow day." Everyone could walk slowly. They might see things they have never seen before. Everyone could eat slowly. People would read and wander. You could take forever to pick up the grimy socks from the floor of your room. You could talk with a slow-motion voice to your parents. What else would happen on a slow day? Slow down and imagine that for a while.

I learned a lot from this book! (And I write science books for kids). It is meticulously researched and vetted. (It takes a loooong time to read the "Excruciatingly Slow Acknowledgments.") Sayre took ten years of marination to create The Slowest Book Ever. It deserves to be on a child's bookshelf for a very loooong time.

However, you're going to have to wait for it. Publication date is April, 2016.