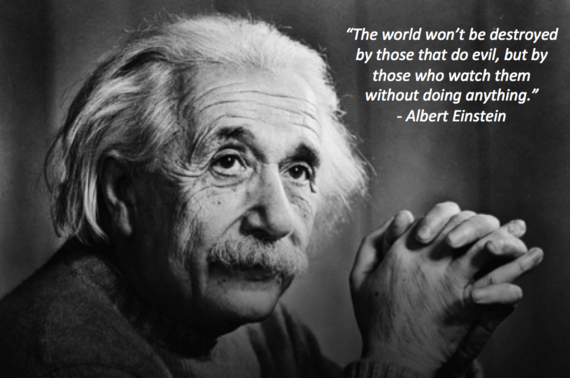 Do you remember studying the Holocaust? The Great Leap Forward? The Spanish Flu of 1918? Regardless of where you grew up, or the schooling you experienced, you surely learned about catastrophic events that left scars on our world. The numbers are appalling: the 6 million Jews tortured, the 35-70 million Chinese dead, the 4 million soldiers in World War I who never saw their families again. It's these events that make me wonder what was the rest of the world doing? How could a community of billions watch a few individuals diminish millions?

The terrorist attacks in Paris and Brussels have become prominent discussion on social media platforms. The hashtags "#prayforparis" or "#prayforbrussels" circulated the Internet at the time of the attacks. We were exposed to their realities and thus contributed to this movement, whether it was updating our statuses or changing our display pictures. Why wasn't the same done for the explosion in Kabul on April 19th, the chemical attack in Syria on April 4th, the car bomb in Turkey on March 13th? Why is there an inequity of compassion? Sure, many of us may relate more to people in Paris or Brussels, but we are fundamentally no different than those in Kabul, Syria, or Turkey. There is a barrier that prevents us from this realization. Moreover, our conversations should not end once the resonance of the attacks does, as the core questions are not answered. There is a gap in our understanding and perception of these events.

One may think perceptions might be blurred with distance, but we can also examine issues closer to home. The Flint Water Crisis in Flint, Michigan is a prime example. This issue of contamination began in 2014, and has since been saturated with bad decisions. Throughout 2015, the city and officials stated there was not much to worry about, and earlier this year, a state of emergency was declared. Between 6,000 and 12,000 children were exposed to the drinking water with high levels of lead. This exposure is reflective of serious health problems that the WHO believes to be irreversible. Lack of systematic change and good governance, rather than a responsive government demonstrative of consistent concern was responsible for the absent resolutions. Given Flint is a city in which 41.6% of residents live below the poverty line, this public health crisis exacerbated the problem for residents.

We encounter pictures and videos that truly expose us to these events, but rather than taking the pictures, we should be changing them. These instances should not be viewed as headlines; they are catalysts for change. And if we're not doing anything to resolve them, then we're also part of the problem.

As an Indian, Canadian, and British woman studying at New York University with aspirations of becoming a doctor, I've made a diagnosis here. I call it: apathy. The word apathy stems from the Greek work apathēs ("without feeling") and pathos ("emotion"). It was commonly used by the Stoics to describe an indifference or lack of concern, emotion, and feeling. Apathy is not subjective to energy or effort from the brain, but nonetheless, it can be exhausting. Our body uses apathy to make the irregular regular, or to cope with distress that appears impossible to solve. Problems, unlike before, are more transnational than ever. In the past, issues could be tackled through the framework of the international state system; whereby a problem within one's border was handled by state jurisdiction. This is simply not the case in today's ever changing landscape. Disputes have broken boundaries, become more convoluted, and thus we have great difficulty comprehending them. It is this increase in complexity that parallels with a surge in apathy. We innocently want to avoid negative feelings, or distance ourselves from obstacles with hurdles seemingly too perplexing to fathom. Perhaps it's because we feel helpless, and believe potential solutions are insufficient.

Apathy is more than just indifference; it's an attitude we need to abandon. There seems to be some propensity to wait for someone else to act and take initiative. We are at a time in the world's history in which there are 1.8 billion youth in the world - the largest population of youth ever. Youth engagement can truly revolutionize the world. It can foster a change that begins at the root, repairing and preventing adverse outcomes. We must focus on increasing awareness - not telling the world what, but explaining why, and discussing how. Penetrate what you know in order to discover these problems beyond their surface. Awareness is more than just knowing - it's understanding what to do, say, and act. We should strive to actively champion change, demonstrate compassion, and transform the way we look at problems to solve them in a way never done before.

We are at the forefront of discovery and the bearers of innovation. Our access, scope, and diversity can diffuse boundaries, if we ourselves do. We have many tomorrow's ahead of us, but for some people this is simply not the case. While we may worry about getting a job or battling a disease 30 years from now, others worry about finding food every day of their life; having a future is a luxury we take for granted.

So, if apathy is the diagnosis, what's the prescription? I say: be part of the conversation, advocate for equality, and actively engage in and support efforts currently in place. Our world's prognosis will be extremely short if ignorance amplifies altruism. Hold officials in Flint accountable, eradicate the ignorance that permeates terrorism, share the stories rather than headlines. Let us act against apathy.

In the time you've read this article, 70 children have just died from hunger. Why? How? I'll leave that for you to figure out.