Utah Phillips walked in the room and dropped a large 2 million year old stone on the foot of a friend who believed that the past was gone and exclaimed, "There's the past! It didn't go anywhere. It's right there on your foot!" The cowboy poet added, "There is no such thing as the new age. It is the same old age but with fresher flowers." 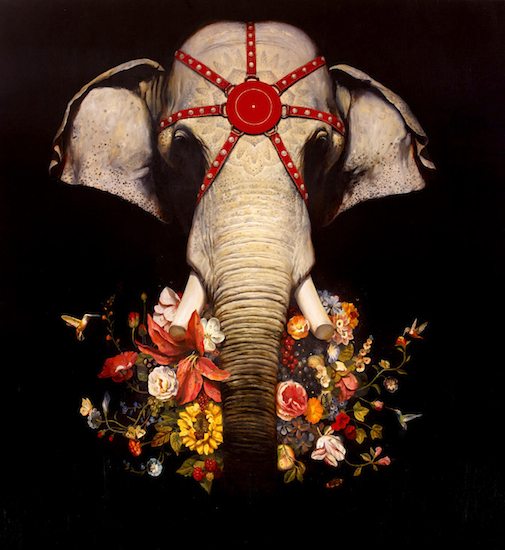 The Archaic Revival is not only the title of a new solo exhibition of work by Martin Wittfooth which recently opened at Corey Helford Gallery in Los Angeles, it is also the term used by philosopher Terrence McKenna as an alternative to the overused moniker, New Age. The Buddhafication of the West. The term actually encompasses a much broader scope but McKenna felt, just as Phillips did, that we cannot outgrow our past. It is an integral part of our present and future states. 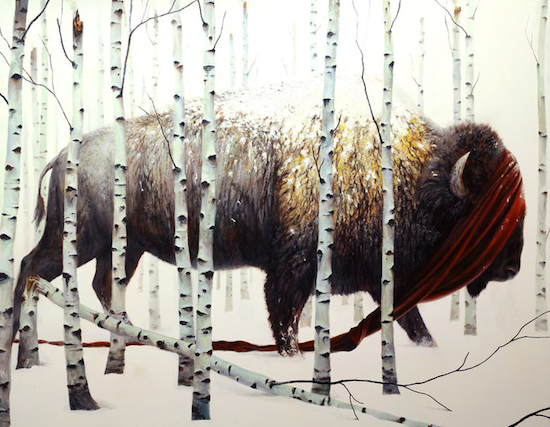 In an interview by Julie Antolick Winters for Bein Art, Whitfooth said, "I often think about what the psychedelic thinker Terence McKenna called The Archaic Revival : a yearning to look into the past to see meaning, connection, the sacred, looking back at us. I need those reminders sometimes, when the current state of human affairs seems dire and in need of a new perspective." Wittfooth reaches into the past to give us and future generations something to chew on. 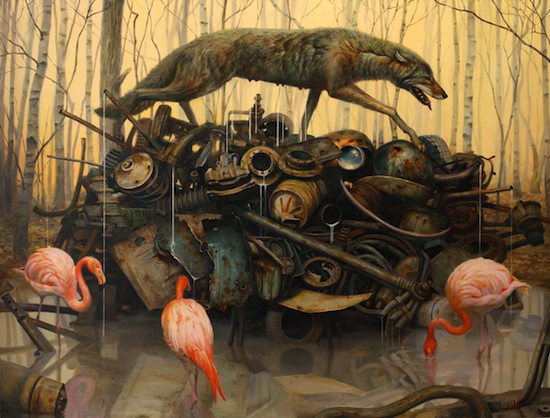 Wittfooth's use of anthropomorphic protagonists allow us to look at these various narratives without taking it too personally. There are no humans in the picture, only evidence that we have been there, perhaps are there still, only subordinate to the dominant forces of nature. Wittfooth affords us the time to calmly gaze at the calamity and the suffering of the world, symbolically, and find peace. Animals have a way of pulling at the heart strings in a special way. They allow us to distance ourselves from the situation, the narrative, and voyeur ourselves in the eye of the tiger. 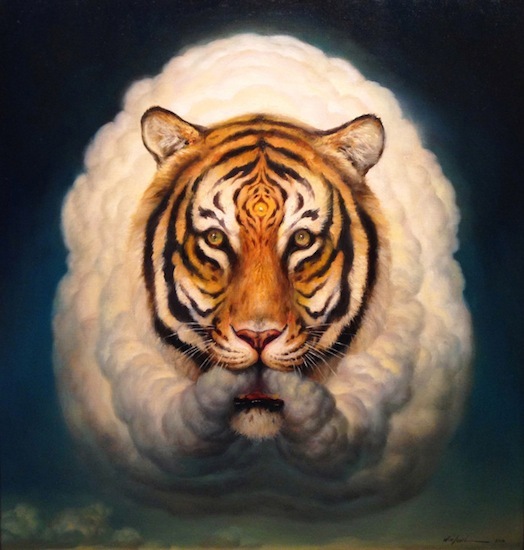 McKenna's Archaic Revival is a collection of interviews originally published in 1991. In it he expressed his notion that Western Society has become sick and is undergoing a healing process. This idea is clearly evident in Wittfooth's new work. The blood from the horns, the mass of electrical cords like snakes and the rusted history of industry. There is sickness but there are also faint glimmers of hope amid the deconstruction. Wittfooth gives us a flower to cling to, a sunset to marvel at, a light in the window of a soul, a Brahman, a Shaman. 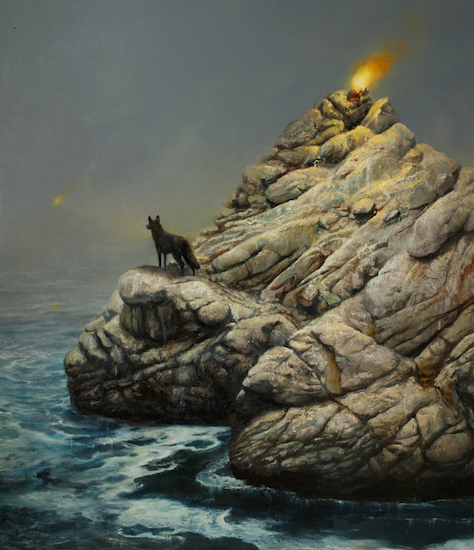 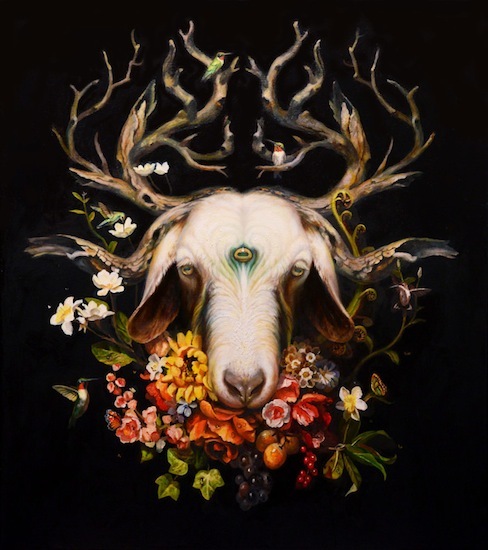 By telling us these stories in a classical style adds to the wonderful experience of viewing his paintings. It makes them believable, in a and the painter's mastery of technique gives us the feeling of empathy, a pillar of the Post Contemporary Paradigm of which Witfooth's paintings are a rather unique example. These paintings are not here to merely poke fun and entertain us, they are here to educate us about ourselves and console us in our discoveries. By comparing the work of Wittfooth to that of Robert Dayber, we can clearly see the difference.

After attending the School of Visual Arts in New York, Wittfooth received his MFA from Sheridan College in Toronto. Since then he has created a series of fantastic solo exhibitions across the country, including Tempest at Copro Gallery and last years Offering at Johnathan Levine Gallery in New York. He has participated in dozens of group shows and his work has been featured in Hi Fructose Magazine, Juxtapoz Magazine, the New York Times Art Review, and the Wall Street Journal, among others.

The artist in today's society represents the shaman in tribal societies, as Joseph Campbell put forth. These are those unique souls that leave the tribe and venture into the darkness to learn things only those that leave can learn. Eventually the shaman returns to the tribe to share what he has learned through story, gesture, and picture. 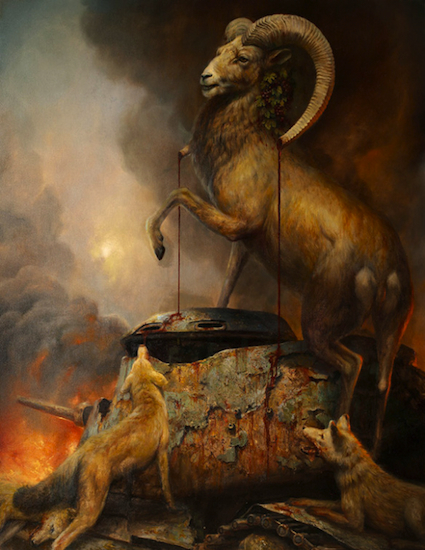 "The tragedy of our cultural situation", states McKenna in Archaic Revival , "is that we have no shamanic tradition. Shamanism is primarily techniques, not ritual. It is a set of techniques that have been worked out over millennia that make it possible, though perhaps not for everyone, to explore these areas."

The tragedy might not be that we do not have enough shamans in our society, but rather a lack of skilled visionaries who can reveal us to ourselves through their work. There are plenty of artists out there exploring the darkness, what we need is for them to come back and show us the light. 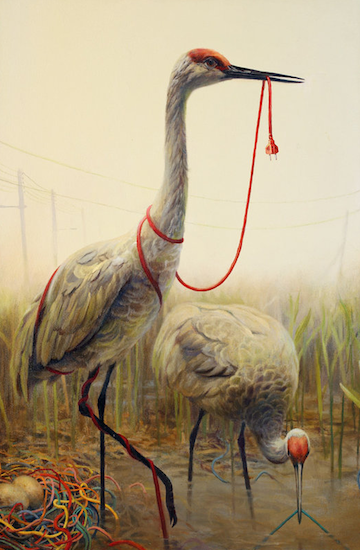 Wittfooth's work fills a cultural void. It may not always succeed, but, at it's best it somehow allows us to forgive ourselves for our percieved wrong doing. It sidelines our ego and and reminds us that we are an extension of source. Out of the corpse comes fresh flowers. A comforting reminder.

The Archaic Revival can be viewed at Corey Helford Gallery until Oct. 29, 2016. 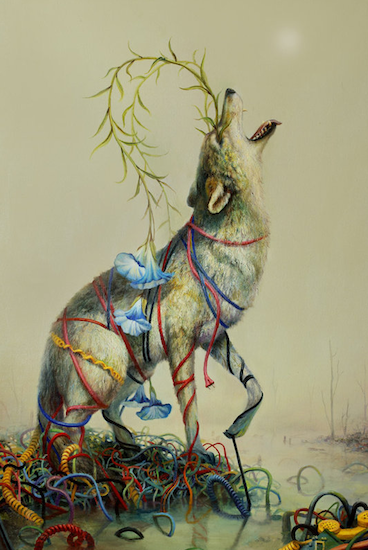