The architect, perhaps more than other professionals, is a mythical figure. He projects a marriage of expertise with panache. Seductive imagery with poignant words. A suit man who doesn't carry a calculator because he can do the math in his head.

A lucky architect finds his buildings praised for materializing cultural and social energies, when they give form to invisible forces: 'frozen music'. Again, it's more often myth than reality. But it nevertheless represents perhaps the one aspiration that all architects sustain: that their building represents the zeitgeist, preferably one several years after the team has submitted final drawings.

It's this aspiration that has motivated a certain corner of the architecture practice over the last few decades: the use and overuse of the word research. Architects love the word. It makes them seem smarter, and it usually is employed to show that an architect is not an idiot savant, that he's actually thinking about the place he's been assigned to. Sometimes it's a ruse, a post-rational coverup. Other times, the inverse: an overcharged research project that could never be fed into a building's design. Either way, it is imperative that the architect understands the context in order to design appropriately for it. 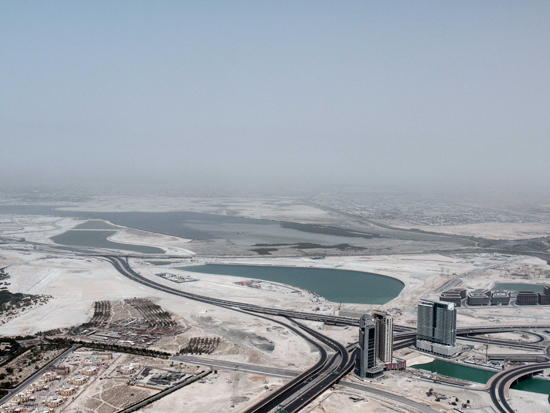 In order to demonstrate this sensitivity, architects have published more than their fair share of books about cities and the so-called 'urban condition.' Usually architects living in boring, or at least comfortable cities, stream outward toward less stable, and therefore more exciting, cities to document, theorize and, if possible, discover. Architects consider themselves among the last pioneers, eagerly defining new goals and unexplored destinations.

In this way, the Al Manakh project is another attempt at exploring. Our focus is on the largely 'unexplored' Gulf Region -- Dubai, of course, and also Abu Dhabi, Doha, Manama, Riyadh, and Kuwait. This region has been covered extensively in books, websites and blogs, with reports from architects on how informal these places are, how danger brings excitement and -- gasp! -- fascinating and unconsciously good design. These cities are projected as 'wacky' places; places to visit because they are the 'weirdest.' It is consistently claimed their model 'doesn't work,' and yet little space is given to consider why they at least try to work. And they are working, whether or not the onlooker approves.

In this sense, Al Manakh's focus on the Gulf Region is the opposite. This time it's about letting the cards fall to the table and then to be collected, considered and compared. Al Manakh is about revealing the normal as the surprising factor. When you talk about Dubai, you're either a champion or an assailant; you will never be taken as a fair critic. Despite that impossibility, Al Manakh puts forward its stories and observations about a region that is, no matter how you take it, developing rapidly and changing while much of the rest of the world floats in its own quagmire. This is our contemporary zeitgeist. We caught the bug in tracking one of the world's most captivating places, and we look forward to sharing our perspective with you here over coming months, while also defusing some of the smoke-screen hype.