Photography allows me to capture instances of invisible light, which once arrested in their magnificence are hard to dismiss. In creating these striking images I aim to focus attention to the topics of climate change and what we can do to preserve our remarkable environment.

The arctic ice acts as a reflective surface directing 90 percent of the suns radiation away from the ocean. This includes both infrared and ultraviolet radiation. Snow and ice are ideal surfaces to visually record ultraviolet irradiance. As global warming intensifies my color photographs become more ultraviolet and my black and white infrared photographs record increased infrared radiation.

The colors in Ultraviolet Reflections gives physical evidence to ultraviolet light that is reflected and refracted off the surface of Antarctica's sea ice. When this ice diminishes we will no longer be protected from an abundance of ultraviolet light and life on earth will be severely affected. 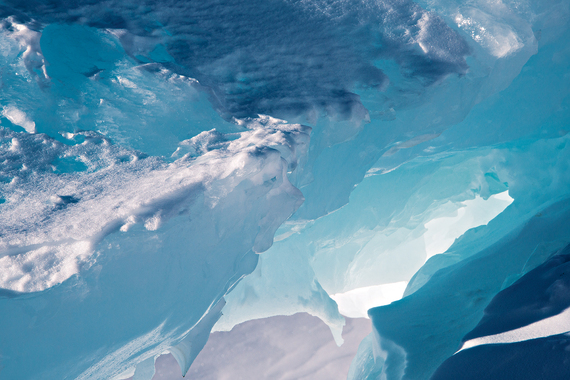 The increase in ultraviolet light being absorbed into the ocean is also causing a depletion of phytoplankton (the single-celled organisms at the base of the marine food web that are the heart of the food chain in the oceans). The depletion of phytoplankton is affecting not only the fish population but also all marine life including arctic birds, polar bears and walruses.

Areas of ice-free ocean absorb more heat from the sun and become progressively warmer, increasing humidity near the surface. When the humidity at the surface of the ocean is higher than that of the overlying air, the moisture is released into the atmosphere. In its vapor form, this water is a greenhouse gas that can lead to further warming and ice loss.

The warming of the Arctic Ocean is also causing methane release. An increase in CO2 and Methane in our atmosphere is changing the ratio of our greenhouse gasses and acting as a blanket keeping this heat close to the Earth...by using expired Kodak high speed black and white infrared film, I can visually record the radiation of heat that is reflected off the surface of the ice. Black and white infrared film is able to capture the heated water vapor emitting from Disco Bay in Greenland. 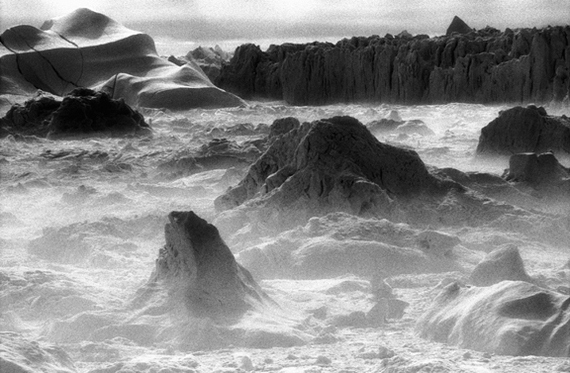 Current reports by NOAA(National Oceanographic and Atmospheric Administration) affirm 2014 as the warmest year recorded. The 10 warmest years in history have occurred since 2000. According to the IPCC (Intergovernmental Panel on Climate Change), "warming of the climate system is unequivocal."

My photographs are both otherworldly and thought provoking. By sharing these images, I hope to provoke discussion on the fragile environment that we are experiencing and stimulate dialogue on how to preserve the beauty of our planet.

I will be doing a live blog while on this expedition recording the visual effects of ultraviolet and infrared light occurring in the landscape of the Arctic Ocean. Please feel free to follow me at: