You have heard Creationists and their sympathizers evoke the comment that you cannot assemble life from randomness. What you don't know is that this is an intentional misunderstanding of science that, unfortunately, works to sway millions of people.

A junkyard contains all the bits and pieces of a Boeing 747, dismembered and in disarray. A whirlwind happens to blow through the yard. What is the chance that after its passage a fully assembled 747, ready to fly, will be found standing there? So small as to be negligible, even if a tornado were to blow through enough junkyards to fill the whole Universe. (p.19). 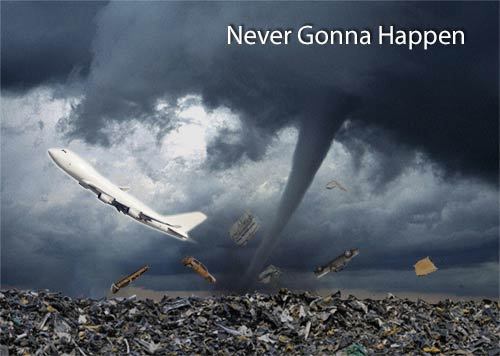 Tornado in a junkyard

Hoyle intended this example as an argument against the idea that life could arise from non-biological, random events, but since then, Creationists have been very successful in co-opting this idea as an argument against the scientific basis for the origin of life. What is amazing is that they all know this is a silly argument, but it is so successful in winning over new converts that they keep using it. 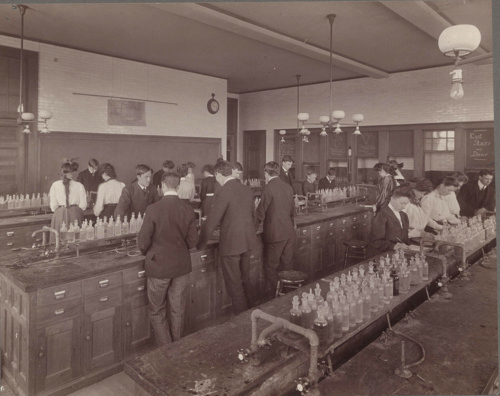 A matter of high school chemistry

Do you remember those chemistry experiments you had to perform 40 years ago in high school? You followed a procedure of combining compounds, call them A and B, to create a new compound, call it C. The experiment was performed literally millions of times every year by other students in chemistry classes. While it is true that the specific molecules of compounds A and B are randomly selected, the outcome once they are close together is regulated by basic laws of chemistry and physics. You get compound C every time. So randomness does play a role in producing compound C, but it is a minor effect compared to the chemical inevitability that is controlled by the underlying laws of chemistry and physics.

We can take this example from your direct experience of the laws of chemistry and easily scale them up to more complex reactions. In those cases, you get chemical pathways that produce intermediate compounds, whose abundances are also strictly controlled by chemical laws (actually quantum mechanics) and by the temperature, pressure, energy and concentration of the chemicals along the way.

Because of the regularity that is imposed by the laws of physics on the way that atoms function and combine in three dimensions, an incredible amount of chemistry can now be performed on a computer instead of at the laboratory bench!

If chemistry were as random as Creationists insist on claiming, you would not have the experiments you performed in high school 40 years ago look anything like the ones that your grandchildren are performing today. So even though you may like the 'randomness' argument that Creationists keep making, your own experience proves that this is not how chemistry works at all. From this point on, it is only a matter of degree not kind.

Before his "famous" quote, Hoyle has this to say.

The creationist is a sham religious person who, curiously, has no true sense of religion. In the language of religion, it is the facts we observe in the world around us that must be seen to constitute the words of God. (p.14)

These are not the words of someone who is making the Creationists point that God, not "random" chemistry, was involved in the origin of life.

If the only document that Creationists trusted was the New Testament, they would still have a marvelously functioning and logically coherent Canon to cherish and believe in. But to say that the vast collection of statements, often conflicting, found in the Old Testament is the direct word of God and supports Creationism is not the majority view of most priests and theologians. Even the Catholic Pope Francis has issued a formal statement in 2014 that evolution and Big Bang cosmology are entirely consistent with canonical interpretation. "When we read the creation story in Genesis we run the risk of imagining that God was a magician, with a magic wand which is able to do everything," Pope Francis said. "But it is not so. He created beings and let them develop according to internal laws which He gave everyone, so they would develop, so they would reach maturity."

A similar position was voiced by Pope Pius XII in 1950. These are the direct marching orders for 1.5 billion Catholics around the world, but they will most certainly not sway protestant literalists, of which Creationists are a member, and whose members are just as likely to view the Pope as the anti-Christ, which was the basis for the Protestant Reformation in the first place!

One case in point is found in Genesis 4, after Cain slew Abel. He was given a Mark so that all of the people he encountered after leaving Eden would recognize him. But as many people have pointed out, at the time of his eviction, there were only three people left: Adam, Eve and Cain. Who were those other people? In the land of Nod, Cain also took a wife, and their son Lamech also took two wives. So where did these women come from? If you are a Creationist you will flummox some kind of explanation and deny that 'Godless evolution' plays any role, and that these other women were later children of Adam and Eve, for example.

All the rest of us look at Genesis as a story not intended to be factual. Even those of us who see evolution as a factual statement of the organic world see a very simple interpretation of this biblical story. Those other people could have been Neanderthals who co-evolved with us but later became extinct about 30,000 years ago, but not before our direct ancestors Homo Sapiens interbred with Neanderthals. That's why you and I have four percent Neanderthal genome in every cell. Is this the legendary Mark of Cain?

In the end, Creationism is here to stay. Not because of some compelling logical argument, but because there is no social penalty for being a Creationist in a largely conservative American culture. There are, however, enormous social consequences for not believing in Creationism if you live in an insular fundamentalist community, which nearly all Creationists do.