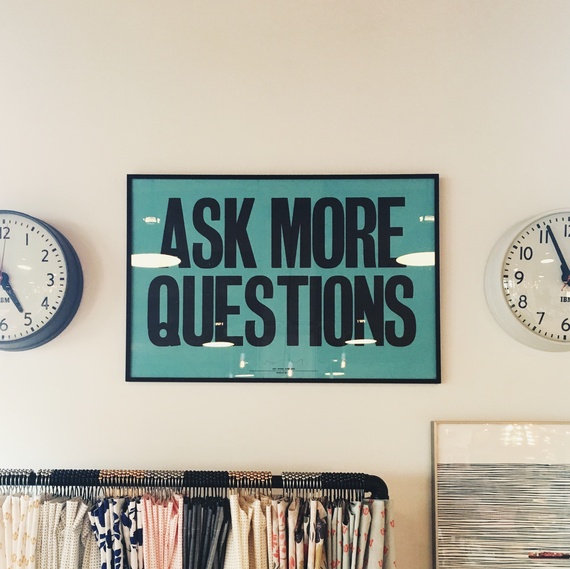 If you look up the definition for the work ask you'll see that it often implies a one-way transaction where A asks B for something and B either gives it or doesn't. No wonder the ability to articulate our asks has been so befuddled especially for emerging artists who haven't accumulated enough social capital to demand such asks.

At a time when we're hyperconnected with each other only separated by 3.57 degrees (according to Facebook's research), you would think it's easier for artists and creative people to leverage technology for their own practices. However, we're left unaided with misguided realities around who and how to build meaningful relationships with those around us. I fundamentally believe, the role 'asking' plays in helping progress one's career cannot be accounted on a linear scale therefore making it harder to easily replicate nonetheless, there's nothing stopping you from giving yourself the best chance of a positive response rather than a negative one.

Putting all cards on the table, I hate it when people ask me for something  --  it's excruciating to have to say no to most of them that's because so many are doing it in a way that doesn't illicit any other kind of answer. The three biggest things I say no to almost on a weekly basis:

Hey, can I buy you a coffee? Why? Why do you want to buy me a coffee? Who are you? How long is this coffee going to take? What do you want from me? Those are the answers I am thinking of in my mind before I seemingly-graciously say, sure drop me an email and I will have a look in my calendar. Although now I have stopped doing that too.

Can you tell me how to increase my followers? I have a readymade answer to this question because I probably hear this at least once a day, even when I am home all day someone hits me up on Twitter or drops me an email with this question. WHY? What do you want to do that you can only do if you have more followers?

Do you think you can introduce me to ________? This is a tough one not because I feel confused as to how to respond but because the answer is a flat-out no, especially because every single person who asks me this question is a stranger, as in I have literally spent a few minutes with this person. That's because the ones who know me don't need to ask me to make the intros, if there are doing something interesting that I feel someone else should know about, I'll do it anyway.

So, that was my rant which I had to get over with just so I have something to point at the next time one such request comes my way. I want to address any questions that may be popping in your head about me asking for things myself and yes, I ask people ALL OF THE TIME but I never do in the ways described above. In the age of social, the idea of cold emailing should be a crime.

The positive response for an ask is not determined by how well you ask but the things you have done before the ask itself.

This might sound a bit controversial but if you have that world changing idea locked up in your mind, it's going to pretty hard for anyone to come to grips with it's intensity in a few minutes no matter how eloquent a speaker you are so go do it. Not the whole thing. Not even the exact same thing but something; just do something that shows your commitment and dedication to the thing you need help with.

It's a bit disappointing to spend an afternoon with someone who has an amazing idea only to learn a few months' down the line that they just weren't committed enough to follow through. There's nothing wrong about it and this doesn't mean (s)he is a bad person, it just means that's not their calling so the next time you do find your calling and need my help, I am not going to be very enthused to meet you because you've set yourself with an underwhelming track record.

So please just do something about it, write an article, print some of your work or just go to conferences to talk to people even if you're not ready to present plus in the process you'll probably learn more about how to do it and not need to make the ask in the end, you never know.

This is probably odd coming from someone who doesn't consider herself very sociable but don't even bother asking for something for the first time from a stranger. The whole idea is just wrong.

It doesn't mean you have to force yourself to be friends with someone you wouldn't ordinarily but do you really want someone who isn't truly invested in you to be helping you? They're never going to do a good enough job as someone who is. What you need is a tribe with whom you can co-create things and be part of something bigger, not a transactional relationship with an expiry date.

Invest time for yourself by doing the work and making yourself better, invest time with others so that they get to know your deepest motivations which give meaning to your work and invest time in outlining your priorities that in-turn helps you focus better.

I would only ever even contemplate about asking for favours/something if I have done the above 3 things for a prolonged period of time, at least six months minimum. Before making the ask, find out if your ask has these three core elements to qualify for an ask.

This might seem obvious but the number of people who just want 'pick brains' hoping they'll stumble across inspiration is astounding. If you aren't sure of exactly what you want then don't even bother roping in a third person to help you figure it out, remember time is the most valuable resource so you're not only asking them to help you figure out what you want but also invest a lot of their non-renewable resource on a hope that you will find what you're looking for.

Be clear on not just what you want but why you want it which makes for a much stronger ask. If you haven't already read the principles of advertising by John E. Kennedy on the power behind the word because, then you really should. Kennedy argues that you need to provide a reason for people to be interested in you and the word because does exactly that. Why should anyone bother to help you? That's where having a clear insight into your 'why' makes it all the more easier for the other person to resonate with your ask.

Give More Than The Ask

This might sound counterintuitive especially if you're in the ask position you might wonder 'well what can I possibly give?'. Gary Vaynerchuck's book 'Jab Jab Jab Right Hook' is probably the best way I can explain this  --  to qualify for any kind of asking you first need to have given, A LOT. This means doing the work, actually reaching out and building relationships and certainly, even give more than you're looking to get in return within the ask.

What does this mean? Well, imagine you want to be published in a magazine or have made something that you want the world to know about (in a manner of speaking, of course). Then don't just cold email the Editor of a magazine asking them to look into the attached PDF to find the necessary info and then dedicate a team of writers to cover your work. Can you see how crazy this sounds? Why would anyone want to do that for you? By the time they want to do that for you, you'll be sick of attending to press calls everyday.

Using the same example, if you want to be published in a magazine especially if you haven't had the opportunity to get to know the Editors in a social settings you want to include within your email not how 'great' your article is but why this needs to be published in that specific magazine? What do you think their audience will gain the most by reading your piece? And most importantly, don't corner them into submission (it never works anyway) but give them all the options to say no, explain that you understand they must receive hundreds of submissions, talk about how they would be doing you a big favour, be honest about why this is so important to you right now and align with the magazine's values instead of forcing them to merely do you a favour.

Of course I'm not saying you are going to get everything that you want if you do these things (especially not if you're a crappy writer, for the sake of this example) but it makes you look like a reasonable human being that even if they choose to ignore now, you would've made an impression adding to your social capital that builds up overtime, you might not notice it right now or even a year later but these are the little things that add up to make up the big things in life.

This is not the same as being clear. Being clear with yourself and to others certainly helps you stand out but a lot of people make the mistake of going through the trouble of setting meetings with influential people without having a clue as to how the meeting will unfold. It's this myth about just 'getting through the door' will get you in which is a lie one car salesman told another and simply doesn't work anymore. If you actually waste someone's time and they have no idea what you've been talking for the last hour, they'll make a mental note to ignore your emails from here on forwards that's simply not good for you in the long run.

Every time you need something always go in with options, if you've been successfully at getting that meeting then know exactly what you're going to say, anticipate responses and give others the options to pick from. Let's say you want sponsorship to do an exhibition, you might want to give them the option of either sponsoring or donating space, helping with PR etc. whatever is relevant to your situation. If you get too specific and unaccommodating, that's a definite way of getting yourself kicked out, figuratively even if they are too polite to literally do so.

Our ways of interacting with each other has evolved but our language hasn't so even if ask is primarily defined as a transactional process, it's no longer just that. Asking for something isn't an exchange between people but a process of building relationships consequently crafting not just the career ladder but a better trajectory for life.

Bhavani Esapathi is a writer & speaker on digital culture and social innovation. She is the Co-Director at The Goethe-Institut's MOOC on Arts Management as well as the Founder of The Invisible Labs. If you liked this, you can find similar content by visiting her Blog on Medium as well as enjoy signing up to her weekly letters as part of The Secret Community of Creatives.