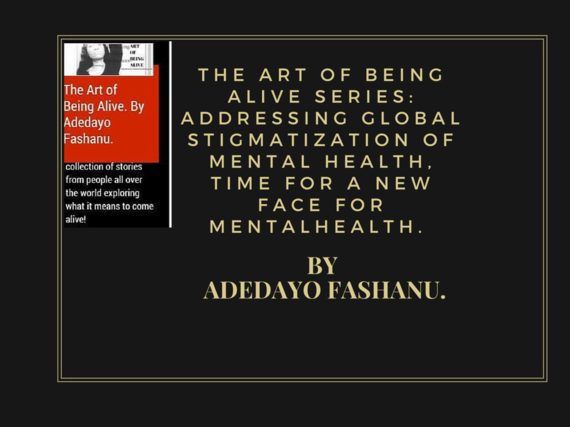 On the day after the Charleston South Carolina shooting, , I wrote on my facebook platform my thought, based on this article about about how society might want to put this shooter and criminal as the new face of a mental health issue when clearly from all the evidence put forward, this was nothing but purely a hate crime stemmed from racism. No doubt, anyone who commits a crime like this must have a psychological problem but painting this shooter's reason for having done this crime as mental disorder being the cause is a huge mis-perception which will lead to a huge variance on how mental health is viewed by the public and hence will increase the stigmatization that is already attached to people who have mental health issue.

This is what I wrote on my facebook which evoked various supporting and opposing responses from individuals: I wrote, " I usually don't get into this side of the news but I want to share my voice on this matter through this platform on a particular area which has to do with mental health and the stigmatization that comes with it; because when we keep putting faces of these type of humans who commit crimes like this, we are so quick to label them as having mental health disorder; and with no pun intended it is indeed a black and white issue. we paint the archetype of a mental health patient as someone who is dangerous and causes this sort of harm which leads to an automatic increase of how people/ society view people with mental health issue hence, increasing the stigmatization around it. I have professionally worked in the mental health field for a while now and with stigmatization of this field, people suffer in silence because of shame surrounding it and shame identifying themselves as needing of the help. What I wonder about with media and this civil rights era we are in, even with history, is the fact that when people of color commit crimes, they automatically become statistics but never viewed as having possible psychological issues but when the tables are turned, the first thought that comes to mind is to diagnose this sort of case, this criminal as having a psych issue. While that might be true, labeling this obvious hate crime as a consequence of a mental illness disrupts a lot more than we are aware of. This guy who committed this crime is not the face of Mental health issue but of something we clearly know about already... If you meet someone who comes out as suffering from depression, anxiety or other mental health issues, don't stigmatize them because of this sort of unfortunate archetype. Also, Don't suffer in silence if you feel you need help from a mental health issue you have, seek solution."

If anything, the essence of having a conversation around this matter is that it can help enlighten more people on how to view mental health in general, and on how to treat others nicely who have any mental health disorder. Unfortunately it is when criminals like these are painted as the face of mental disorders, that leads to a wrong correlation and misconception which increases stigmtization.

Stigmatization surrounding mental health is a subject that must be understood by the general public because of the dangerous effect following it, statistics according to NAMI show that 1 in 5 Americans live with a mental disorder and estimates indicate that nearly two-thirds of all people with a diagnosable mental illness do not seek treatments because of the stigmatization attached to it. While this is staggering, we all have a role to play in this especially the media.

As a humane community to help reduce the stigmatization and discrimination surrounding mental health, I have only one solution to propose which is to STOP BEING IGNORANT ALREADY!

Let's get familiar with the facts on mental health before assuming and jumping into wrong conclusions. The reason why this Charleston shooting bothers me when the media attempted to paint the criminal who committed this atrocity as a consequence of mental health issue, is because when we continue, as a society especially the media like stated in this article by Psychology Today, to perpetuate stigmatizing stereotypes of people with mental health problems by putting forth a case like this as a global face of mental illness, it adjusts our perception of this issue. We generally as expected, begin to categorize all and every persons with mental health issue as violent and as a result we scorn them, shy away from helping them, and segregate them because we fear them. Imagine if people we looked up to in the society openly admitted that they suffer from a mental illness in someway; like if Beyonce comes out someday to say she suffers from depression and has been seeing a therapist since she was a kid, is it possible that we will begin to view mental health in a better light? It is all a cultural phenomenon, if they keep putting the archetype of mental health as a violent mass shooter, what is the hope for those that do suffer from mental health issue but are not anything close to violent and are beyond that still highly functioning citizens, but unfortunately due to stigmatization we make life harder for them.

* Staying ignorant is not the answer, so be well informed about the facts on mental health before stigmatizing anyone you know who suffers.

* If you suffer from a mental health issue, there is help and support through advocacy organizations like NAMI because it is a global issue and you are not alone. Staying ashamed about your issue only dis-empowers you but being vocal and seeking help timely, can save you and empower you to learn how to manage your diagnosis.

*I am using this opportunity to call out any prominent member of the society who suffers from any mental health issue, to not stay silent anymore and speak up, to use their influence to give a global voice to this issue and become the new face of mental health. So as a culture, we can know that mental health issue is not the end of the road for many, and we can stop faulting crimes like this on mental health being the sole cause.