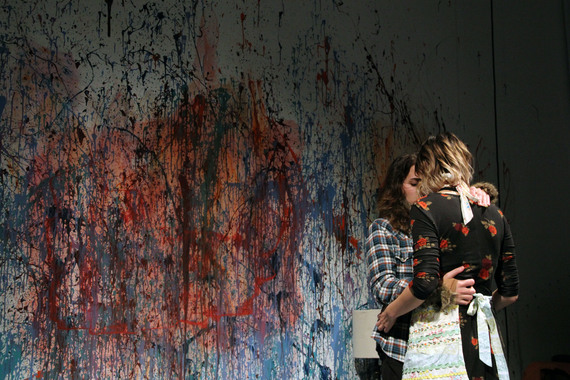 Ella Boureau is an NYC-based writer, editor, events curator as well as the Awards Administrator for Lambda Literary Foundation. She founded and ran the online magazine and reading series In the Flesh for several years. Her writing has been featured in Guernica, Tin House, Slice Magazine, and Full Stop. "Helps to Hate You a Little: A Lovestory," is her first play. It is playing at Cloud City through November 20.

Below is an interview excerpt on her recovery from traumatic brain injury.

As this interview takes place, you're one week away from the opening of your play. How are you doing with self-care?
I don't have it all figured out. I have a hard time sleeping and I'm an anxious person. I was in a car accident three years ago and I had a mild traumatic brain injury. It's mostly better, but one thing that's still hard is sleeping and getting out of a weird brain loop.

Did the injury change your creativity?
The weird thing about brain injury is you don't seem that different on the outside. The thing that changes is your cognition. How someone understands the world is so intimate that you don't even know it's happening until it's not happening in the same way. It's almost like there's an off button sometimes. I'm here, but I'm not here. There's a dulling of feeling and definitely a dulling of creativity. You can't take in as much and everything is more overwhelming.

People became complicated in a way they weren't before. I used to be very extroverted and love talking to people. I've become much more introverted. It's gotten better, but I'll be at a party and suddenly I'm like, I have to go. I can't even say goodbye because I'm going to explode into tears. It's weird and it messes with you on a very deep level.

I'm 28 now, so usually 28-year-old Ella is driving the car. Sometimes 4-year old Ella is driving, but usually it's me at my current age. After the brain injury, 4-year-old Ella is behind the wheel a lot more and is dealing with more situations that are way beyond her maturity level. I am reduced to a child in situations that I used to handle relatively effortlessly. I don't know how visible it is, but that's how it feels inside.

What's amazing is how keenly aware you are of your boundaries and internal processes.
I've thought about it a lot. [Laughs] I can't really drink alcohol. I can't stay out late more than one night in a row. I absolutely have to sleep. I've gotten better at noticing when I'm getting emotional for no reason. But it's that thing. The hardest things you go through can end up saving your life in a weird way. I was 25 when the car accident happened. When you're at that age, you're just like, "Everything is amazing and I'm not going to think about taking care of myself at all."

When you write now, are you on or off?
It depends what kind of writing it is. If it's an essay and your thoughts have to be organized in a certain way, I'm much sharper. I don't know if you get this way when you're writing, when you get into your groove, you go down this path and it just feels like it's going to be a good writing day. You feel like you're in your element. That doesn't happen anymore. It really sucks. If it happens, it happens for, like, five minutes.

Yet even as you describe your struggle with creativity, you continue to create. What is your play "Helps to Hate You a Little: A Lovestory" about?
I wrote this sex scene, and when it first came out I thought, this is a play. Then, I got into a relationship with a woman who had a very serious boyfriend, and basically had an affair. It went so wrong and things fell apart. I'm still trying to wrap my mind around how it all happened. There was also an aftermath in the community and [dealing with] how people we knew reacted to what happened. Even in my little Brooklyn queer enclave, I fell into this hole of, "You're the scary lesbian monster who breaks up heterosexual relationships." It surprised me and it really hurt, and I wrote it from that place of pain.

We don't know the internal anguish that is happening, so to create this extra layer of punishment is cruel. We are also in an age where we're called upon to have an opinion about everything. People make mistakes and there will already be consequences. The least we can do if we are watching it unfold is to have some compassion.

The play is going to be at Cloud City in Williamsburg, and it runs through November 20.

What are your thoughts for other people who are trying to overcome severe trauma?
I'll give the advice someone gave me. I have a family friend who I call my godmother. She was hit by a Mack Truck while stopped at a stop sign, so her brain injury was much more severe. She told me, "Don't panic. Just observe the changes that are happening. You can write them down, but try not to judge what's happening to you."

I also went through a period where I just felt this vast desert of nothingness for months and months. I was complaining to a friend about this and she said, "Sometimes you just need to feel empty. You can't be full of shit all the time. You need that emptiness to make way for new things, new experiences." It's all about not judging yourself.