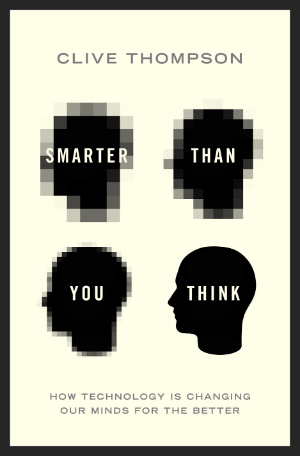 The following is excerpted from Smarter Than You Think: How Technology is Changing Our Minds for the Better available this month from The Penguin Press.

__________
We're getting closer to the machine all the time; our transactive partners now ride in our pockets. But what will happen as they move even closer to our minds?

If you want a glimpse of that, say hello to Thad Starner. Starner is a forty-three-year-old computer science professor at the Georgia Institute of Technology who also works for Google.

But he's best known as one of the few people on the planet with years of experience using a wearable computer. The guts of the computer are the size of a small soft-cover book, strapped to his torso in what amounts to a high-tech man purse. And what's most prominent is the screen--a tiny LCD clipped to his glasses, jutting out just in front of his left eyeball. While you or I have to pull out a phone to look up a fact, he's got a screen floating in space before him. You might have seen pictures of Google Glass, a wearable computer the company intends to release in 2014.

Starner's helping Google build it, in part because of his long experience: He's been wearing his for two decades.

"This is about creating a higher level of intellect--an augmented intellect," he tells me when I meet him. Starner has a cheery, surfer-like handsomeness, but the tiny black protuberance jutting out of his glasses is at first pretty jarring. Ten years ago, onlookers assumed Starner's wearable was a medical device that mitigated some defect in his vision, and they gave him a wide berth. Now Swedish investment bankers beg him to tell them where they can buy one.

Starner first got the idea in 1989 in an undergraduate class at MIT. He was frustrated by a paradox in note taking: Whenever he wrote a note, he stopped paying attention to the professor and risked missing out on new information. But if he didn't take notes? He'd have nothing to study from. He wanted to split the difference--to have a computer that was so integrated into his body and his field of vision that he could keep looking at the lecturer while he typed.

In a few months, Starner had cobbled together his own wearable. It was as heavy as a textbook, but it worked.

He became a cyborgian Jeremias Drexel. Because the keyboard was always in his hand, Starner would write down stray thoughts, then bring them up in conversation later on. "I'm basically an expert on anything I've ever heard anyone talk about, because I can pull it up and reread it at a moment's notice," he says. These notes seriously enrich the experience of talking to Starner, because he's adept at picking up subjects you discussed a year ago, then musing over his thoughts since. In two decades, he's jotted down two million words of notes.

Starner's wearable is also connected online, producing moments of seeming omniscience that can be startling. While we're having coffee at a Starbucks, I casually mention Timehop, that service that replays your status updates from a year ago. "Right," he nods, then recites their corporate slogan: "The 'time capsule of you.' " He'd pulled up the Web site while I was talking about it. Later, when I mention a story I'd written a decade ago, he casually drops in a few precise details about it, too.

Part of what makes Starner's wearable so useful is that it's so fast to consult. Despite the idea that we Google "everything" on our smartphones, in reality it's still a tiny hassle to pull it out of our pockets, so we do it only when we really feel a hankering, as when settling an argument or checking a train schedule. The same thing goes with taking notes. We almost never do it, because it's awkward, not just physically but socially; you don't want to interrupt the flow of a conversation by jotting something down. By putting a screen right in his eyesight and a keyboard in his hand, Starner has effectively moved the mobile-phone factoid out of his pocket--where he'll rarely consult it--and into his peripheral vision, where he almost always will.

I tell him many people would feel too self-conscious to wear a screen poking out in front of their face like that, or to hold a one-handed keyboard. He's not so sure. It's true that among my friends in the 1990s, the mere possession of a mobile phone marked you as a self-important boor. That judgment certainly vanished. There's already a joking insult for the Google developers who've been spotted wearing Glass--"Glassholes"--so it's possible the same pattern will emerge with wearables: outright mockery, slow adoption, then Beyoncé will be seen wearing one onstage and the craze will begin. Starner also suspects other tools will bridge the gap, like wristwatch computers.

Doesn't he get distracted with a screen in his field of vision? I couldn't imagine how he'd be able to pay attention to anything. But Starner doesn't come off as a high-tech ADD head case. Compared to some New Yorkers I see around me in everyday life, witlessly absorbed by their iPhones as they walk down the street, he's very attentive and polite.

That's because, he says, he obeys strict social protocols. He uses his wearable only to look up information that augments a conversation he's having. If he's talking with someone about the Boston Red Sox, he might pull up statistics to sprinkle in, but he's not secretly perusing cute-cat videos. "If you're finding information that supports your conversation, that's making it richer; it's multiplexing, not multitasking," he argues. He waits for natural pauses in conversation to jot down notes or to consult them. And he has an absolute ban on checking e-mail when face-to-face.

"If you check e-mail while you talk to someone you lose forty IQ points," he says. "People can't multitask. It's not possible. I think attention is a big, big issue. People are addicted to their Crackberries. You've got to make the systems so that they help people pay attention to the world in front of them."

Curious to see what it's like to have a computer in your eye, I tried out Starner's eyepiece. When I held it up, I saw what looked like a crisp screen floating at the right-hand side of my right eye. I could easily read Starner's on-screen notes, which were all from his and my conversations. It felt odd, but it also felt like something I could get used to.

Perhaps most interesting is his distinction between the psychology of finding something and refinding it. If he's alone and doing research, he'll use his wearable to google documents, just like any of us sitting at a computer. But when he's talking to someone, he'll mostly just ping his notes; he searches online much less often. That's because his notes are his personal semantic stores; he's recuing facts, refreshing the details of what he already generally knows. That process is fast and doesn't distract. But trying to imbibe a new fact requires focus and attention, so he avoids doing it while in conversation.

Starner doesn't think his use of on-tap recall has eroded his own memory. "It's actually the opposite," he argues. His recall of arcane is strengthened by repetition. "If you pull up the same fact seven or eight times, eventually you've been reencountering it so often that you wind up remembering it unaided," he says. That is indeed what technological pioneers envisioned in their dreamy, visionary manifestos.