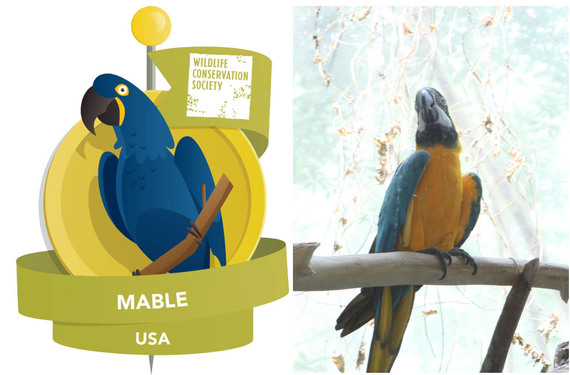 Can game apps get kids out of the house and literally into nature? The makers of games like Habitat, whose play combines cartoon-character virtual species with real-life animals (like Mable pictured above), think they can.

It's not all fun and games when it comes to games featuring the environment. With some green game apps, not only can you live in your world and play in it, you can learn stuff too.

Judging from the amount of time my grandkids hunch over their iPhones and iPads for game time, I'd have to say games have garnered a major portion of the younger set's mindshare. And in my book that's a shame. While more and more studies find that children's outdoor time contributes to their well-being -- by mitigating obesity, promoting cardiovascular, musculoskeletal, and mental health, as well as boosting academic achievement -- the number of hours children spend outdoors is on the decline. (See also here.)

Is there a cause and effect? I'd say that's a no-brainer. With only so many hours in a day, it's a safe bet that all that time kids spend playing computer and video games means less time outdoors. In his book The Last Child in the Woods author Richard Louv refers to this phenomenon as a "nature deficit disorder," a phenomenon Paul, a fourth grader from San Diego, indirectly describes with this comment: "I like to play indoors better 'cause that's where all the electrical outlets are."

So What're You Gonna Do?

How do we reduce our children's nature deficit? One approach is for parents to "be the boss" and confiscate those electronic gadgets and tell your kids to "get outside and play." It's a strategy that can work, but as a parent, I can tell you it can also be counterproductive, leading to resentment and rebellion. Authors Sarah Olmsted (Imagine Childhood), Hilmi Ibrahim and Kathleen A. Cordes (Outdoor Recreation) and Louv are just four people who are considerably more creative with the hundreds of different strategies they offer in their books.

Now a growing group of gaming programmers and app developers has come up with another approach -- a sort of "if you can't beat them, join them" strategy: use computer games, the presumptive enemy in this battle for your children's mind, to acquaint them with and spark interest in the environment and possibly even get them outside.

What's Your Game? Make It Nature

Visit the Apple App Store or Google Play, and you’ll find dozens of games, many of them free, intended to teach and inspire on all things environmental. Which are the good ones? That's where you're going to have to get down and dirty into gaming if you want to find the ones that are worth your kids' time. Here are three (all available for free) that TheGreenGrok has had a tiny bit of time to check out and that look pretty good:

1. Habitat the Game, a new interactive game by Elevator Entertainment, is a global, multiplayer game designed to get 7-12 year olds into the great outdoors to discover what's in their neck of the woods, and to complete real-world sustainability missions to garner points. Riffing on the Tamagotchi digital-pet-caring craze of the 1990s, Habitat has players caring for their very own polar bear but in the process they get to see how their everyday actions can impact the environment. (Available for iPhone, iPad, and Android devices.)

2. Journey North "is a global study of wildlife migration and seasonal change." An interactive game that includes user input of field observations (such as signs of spring), this offering from Annenberg Learner encourages players to observe the world around them and the species that inhabit it, and become attuned to the ways that "seasons affect the entire web of life." (Available for iPhone, iPad, iPod touch, and Androids.)

3. Plum Landing, a multimedia science project by WGBH aimed at children ages 6-9, includes a set of interactive assignments and games "to get kids excited about nature and science." One of the games sends kids on outdoor missions to take photos of a whole assortment of nature from flowers and insects to shadows and weather. Another, Biodiversity Bingo, sets kids exploring in their backyards to see what just might be lurking there. (Available for iPhone, iPad and iPod touch.)

The jury's out, but at least one study suggests there may be something to the enviro-game approach. The study, led by Andrew Balmford of the University of Cambridge and described in the journal Science in 2002, involved asking a group of children to identify both actual species in nature and fictional characters from the TV show Pokémon from a series of flash cards with images of the "creatures." Balmford and his colleagues found that "children aged 8 and older typically identif[ied] Pokémon 'species' substantially better than organisms such as oak trees or badgers." They conclude:

"First, young people clearly have tremendous capacity for learning about creatures (whether natural or man-made), being able to identify nearly 80% of a sample drawn from 150 synthetic 'species.' Second, it appears that conservationists are doing less well than the creators of Pokémon at inspiring interest in their subjects."

Could be conservationists and educators could learn a thing or two from games. Of course the idea that games can be used to teach is not new -- it's a concept that's been around for thousands of years.

While centuries-old competitions may not have included taglines like today's, many a game-playing human throughout the millennia has lived by the idea of "life is short, play more." From the ancient game of Go, which Confucius deemed instructive in learning "about filial piety and human nature," to the games of chess and its forerunner chaturanga, which were used "to illustrate battlefield tactics and probe new strategies," to modern-day video games that are used to train the U.S. military to marbles, a game that Swiss psychologist Jean Piaget studied to see how it instructed children about "moral judgment," games have been used as educational tools for a long, long time.

The 20th century cultural historian Johan Huizinga in his book Homo Ludens (Latin for Playing Man) posits play as a "necessary activity in the generation of cultures."

“The spirit of playful competition is, as a social impulse, older than culture itself and pervades all life like a veritable ferment. Ritual grew up in sacred play; poetry was born in play and nourished on play; music and dancing were pure play. … We have to conclude, therefore, that civilization is, in its earliest phases, played. It does not come from play … it arises in and as play, and never leaves it.”

More recently game developer Jane McGonigal argued that game playing is an intrinsic part of human social evolution, and a force for good. She writes that game play can change "what we are capable of as human beings; we're evolving to be a more collaborative and hearty species."

So could it be that these game creators and game-playing advocates are onto something? In our media-infused, gadget-crazed, eternally wired world, could it be that games played on the very same electronic devices that keep us indoors and locked away from nature will entice us to step into the light, inhale the fresh air, and take the time to smell the roses? If so, I'd say to those kids, now you're playing with power.

The Artful Planet series is produced in partnership with the University of Washington's Conservation Magazine. Keep up with TheGreenGrok. Find us on Facebook.