The subject of nature for the artist is the thrashing ten ton whale in every studio, indoors and out. Whether scanning a horizon, or reverse engineering the palette of an autumn leaf, nothing escapes the intensity of the artist's gaze. To be an artist is to be an environmentalist. As our consciousness about how human behavior affects Mother Nature rises, there is a flourishing of art that takes the subject well beyond the Hudson River School. The following interview is the first in a curated series about artists who address nature and our environment as their subject matter. 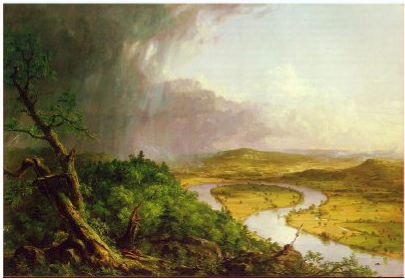 Thomas Cole "TheOxbow" Oil on Canvas View from Mount Holyoke, Northampton, MA 1836, From "The Hudson River School" -- a period in the 19th century where painters depicted a romantic and pastoral America-- a wide open terrain where man and nature co-existenced peacefully.

Like a great painting, or a battlefield post-battle, images of a natural disaster's aftermath stop us in our tracks and unleash a torrent of questions. First and most immediate: What the hell happened here? Second: Where are the people? Third: What caused this? Was it man? Machine? Atomic bomb, perhaps? Then fourth: No, no. This is bigger than man. This must be nature. And we stare a bit longer. Then a deep fifth revelation. No, it is Man. Man is changing nature.

Since 2001, photographer Sasha Bezzubov has traversed the planet to capture on film the physical wrath wrought by the increasingly frequent natural disasters. In his breathtaking series "Things Fall Apart," Bezzubov large format photographs present mother nature's fury in startling detail. Devoid of human-presence, these images engage us in a reckoning with both nature and our lasting imprint upon her. 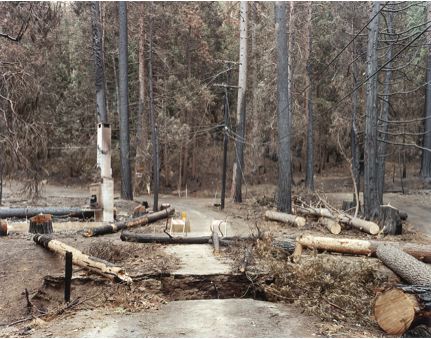 Kimberly Brooks: I notice that you started the "Things Fall Apart" series after 2001. Did 9/11 impact your decision with this series?

Sasha Bezzubov: I actually started the "Things Fall Apart" series several months before 9/11, the spring of 2001. I had started to think about our fragility after a series of very destructive hurricanes in 1998 that ravaged the Caribbean and parts of Florida. Watching these events on TV I had a kind of existential epiphany that went something like this: we spend the better part of our lives making ourselves comfortable. We work hard, we build a house, we live the dream. A heavy wind comes and turns our dream into smelly debris. We wake up the next morning and start over like an ant colony.

KB: Did you at all see America as falling apart afterwards?

I don't want this to sound overly emphatic, but I see the WORLD falling apart all the time. Every few months, I realize my body has aged. Aches develop in places I wasn't even aware of. I recently renovated my house and almost immediately I started to notice cracks developing in the caulking. Entropy shadows life and with every birth there's a death certificate. It's like the jungle in Gabriel Garcia Marquez's One Hundred Years of Solitude slowly invading every pore of the mansion. We usually are there to chop at it, but the moment we turn away or loosen our vigilance, entropy is right there making its slow, deliberate advance. The natural disaster, the climatic event, the catastrophe places this reality on a stage.

Kimberly Brooks: You've just described what happens to my kitchen after my kids enter it. When did the concept of entropy in nature as a theme take hold for you?

SB: In 1998 I watched the news as the coast of Florida was torn apart by a major hurricane. The occurrence of natural disasters has since become more commonplace, but at that time, it was still unusual. I was taken by the images I saw. I had rarely seen anything of the sort, at least not in peacetime. Growing up in the Soviet Union, I was exposed to an unhealthy number of destruction images-- post-WWII Europe, the camps, etc... Over the next couple of years, as these catastrophic events began to increase in frequency and grow in ferocity, I grew dissatisfied with the way the media treated these events. The unclear, impressionistic images of the scenes left me with the desire to see more, and what little the networks said about these disasters made me want to know more. During the recent fires in Southern California, I was frustrated by how much time was wasted by the networks on questions of possible arson and the success of evacuations, with virtually nothing said about the larger implications of the frequency and potency of these fires - the semi-permanent conditions of drought resulting from global warming, the unscrupulous building/developing policies which render the land more fire prone and makes it impossible to let the fires burn themselves out. Since 2001 I've been making photographs of landscapes after natural disasters all over the world. 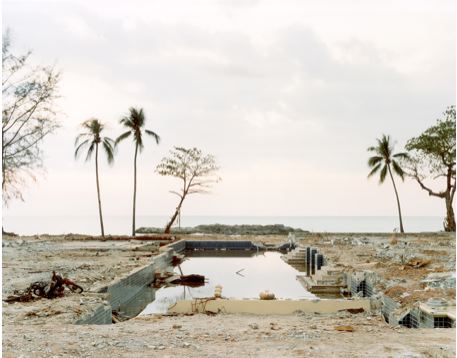 KB: The detail you capture, which is hard to show on the Internet, is truly stunning. It's as if they were taken by the offspring of Ansel Adams and Edgar Allen Poe. What kind of camera do you use? How do you achieve that effect?

SB: I use a 4x5 inch camera and make large-scale prints, the goal of which is to describe every broken and singed detail of destruction with utmost clarity. Because my way of working is slow and meditative, I generally wait a couple of weeks until the TV crews leave and the shock has worn off a bit. I'm interested in showing these places with as little drama as possible by making images that are virtually devoid of humans and lit by an overcast sky. They show the calm after the storm, the world without us. As it happens, I use essentially identical technology to the 19th century photographers, like Timothy O'Sullivan and Henry Jackson, who promoted the Wild West for prospectors, developers, settlers and tourists. It was in part their ideology - to subdue and settle the land - that greatly contributed to the environmental disaster of the late 20th century and brought on the devastating events I try to represent.

KB: Where does the title "Things Fall Apart" come from?

SB: It comes from a poem by W. B. Yeats. Though Yeats writes about another time and circumstance (early 20th century Ireland), I find these three words a perfect lament for the natural decay, dissolution and coming apart of the world as we know it. This sentiment does not advocate another course, but acknowledges the fate of everything that has been put together. The act of creating these photographs is for me a meditation on impermanence and death, not in a morbid sense, but as the natural course of things. At the same time we humans are causing the climate to change at an unprecedented rate, in turn causing the severe climatic events that put our lives at risk. The work is also meant to draw attention to some of the results of our collective irresponsibility. These two possibly conflicting strands exist in this work simultaneously, for better or for worse.

KB: When did you first tackle nature as a subject?

SB: The photographs in "Things Fall Apart" were the first time I photographed nature. Until this series I felt I had nothing to say on the subject. I always felt a certain affinity for the New Topographics movement in photography. What interested these artists is the realization of nature's receding and marginalized role in our environment, its many displacements by the merely functional and unattractive new developments, it's mutation. I feel that in my work, nature strikes back. Even when nature is at its saddest, it appears like it will be there far beyond the shoddy constructions that are it's temporary neighbors.

KB: Has this series made you more of an "environmentalist", per se?

SB: That's a really good question. On the one hand I share with environmentalists the conviction that we need to act now in order to slow the pace of stress that we're putting out climate and environment in general through. I think that if we need to make economic sacrifices to slow climate change and other deleterious effects of our industry, and this is debatable, they are preferable to the possibility of living out our days in a hostile world of warming climate, increasing natural disasters and diminishing resources. And in my little ways I'm trying to live that ideal. On the other hand if we all stopped reproducing tomorrow, in a hundred years Earth would be human-free, which may be the most environment friendly act.

About the Artist:A multiple recipient of the Fulbright Scholarship Award for his work in Vietnam and India, Sasha Bezzubov is a photographer whose work regards the politics and environment of our changing world. The Gringo Project, together with Expats and Natives and The Searchers (collaborations with Jessica Sucher) looks at the role of Western tourism in the developing world. Things Fall Apart, a series of landscape photographs taken after natural disasters, has been exhibited internationally as well as in one-person shows at Taylor De Cordoba Gallery and The Front Room Gallery (NYC). It has been featured in The New York Times Magazine, Esquire and Newsweek. A monograph of "Things Fall Apart" will be published by Nazraelli Press in 2008. Selections from this project will be included in the exhibitions Inlandia, Wignall Museum, Chaffey College, CA (Jan. '08) and Sound the Alarm, Wavehill, Bronx, NY (March '08). Bezzubov received an MFA in Photography from Yale School of Art. The Searchers, a collaboration with Jessica Sucher, will be exhibited at "The Front Room Gallery in Williamsburg, Brooklyn, NY this April. --