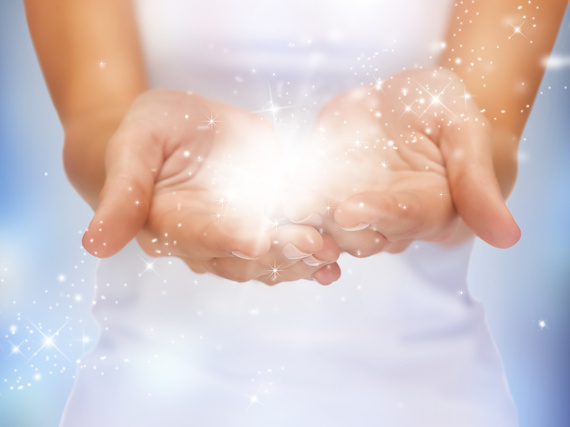 I used think that if you worked hard enough in life, you could "force" your will upon the Universe, and thus, get whatever you wanted. A few years ago I realized the error of my ways.

Having broken my heel for the second time in a year, I was desperate to heal as quickly as possible. I kept praying to be healed, all the while trying whatever magic oil/ pill/ exercise/ healing ritual anyone recommended to me in an effort to heal faster. None of it worked.

Then one day I had a conversation with my friend Paulette. "Do you want to heal?" she asked me.

"Of course," I said, and proceeded to list everything I was do-ing in my effort to heal.

She shook her head. "That's your problem."

"What?" I stared at her dumbfounded.

"You're do-ing. You need to allow your body time to heal, to recover, to grieve [I had just gotten a divorce the week I re-broke my heel]." Her point? I was praying for healing and then self-sabotaging by over-doing so no healing was actually occurring.

Our conversation was a huge 'aha' moment for me. Yes, you have to ask for what you want, and yes, you have to let Universe know you're serious about it. But then, you have to get out of your own way...

That day, I stopped fighting against the Universe. I prayed, I journaled, I rested, and I let go. I allowed healing to occur on its own time, in its own way. Likely this would have all happened much faster had I done this from the beginning, but life is nothing but a lesson...

I get questions every day from women who want to manifest their heart's desire: a new job, a child, a Soul Mate, a friend... Heart felt stories of loss, grief, and heartache. I listen; I ask questions, I suggest different ways of thinking of be-ing. But it boils down to this: if you want to manifest something, you have to ask for what you want and then get out of your own way.

Dr. Mary's 7 Steps to Manifest What You Desire