There were several extraordinary features to this day that began with a bus ride to the Bronx. In a moment in time where public employees are the focal point of populist ire, a day devoted to recognizing the accomplishments of individuals who dedicate themselves to public service is at the very least, refreshing (though New York is far from Wisconsin both geographically and spiritually). And though some city-folk, this girl included, experience city life within the confines of the comforting Manhattan grid (excepting downtown), the excursion on Thursday, organized by the Fund for the City of New York featured a range of locations in the Bronx, Queens and Manhattan.

This outing was the annual tour to the work places of the six winners of the 2011 Sloan Public Service Awards to honor them, in the company of their co-workers. It was an honor to be invited by Fund President, Mary McCormick to join one of the most civic minded groups I have ever had the pleasure of spending the day with as they made presentations to each recipient.

The Sloan Public Service Awards were first awarded in 1973 and are considered the Nobel Prize of Government. They are funded with the support of the Alfred P Sloan Foundation since 1985. With over 250,000 public service employees and hundreds of nominations, six are selected.

The criteria are outlined as follows:

"Extraordinary service delivered with ingenuity, energy, and compassion; Commitment beyond the call of duty; Responsiveness to public needs...; Outstanding and reliable performance; Willingness to take risks...to improve services or correct abuses or inequities; Ability to adapt to change...; Dedication to upholding public interest amidst competing interests, pressures, and demands."

It was only in seeing the winners on their home turf, and listening to their co-workers, that the true impact of each hero/heroine becomes apparent. I missed the first stop at the Segundo Ruiz Belvis Health Center in the South Bronx, where Elva Rodriguez, a Women's Health Nurse Practitioner was recognized for 23 years of service to local women, "often being the person who turns on the lights and the last to leave." 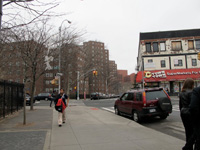 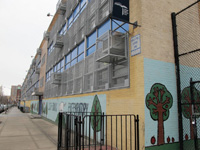 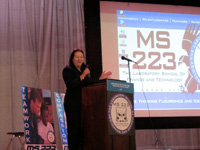 I caught up with the bus at Middle School 223 where the school slogans read: Compassion, Relentlessness, Teamwork, Scholarship, and Reflection. Principal Ramon Gonzalez began his teaching career in l995, driven to succeed in part by a dream to buy his mother a house on the "other side of the street" from the tenement building they lived in. Years later, when he actually bought the house and invited her to move in, she said she "liked living on her side, but just wanted to know if it could be done." The inspiration to dream is part of his message to his students. "Life can be different if you are passionate, focused and care. Start your dream now, it takes a long time and you will need lots of allies." The performance of the students in MS 223, the vibrancy one feels in the hallways and sees on the faces of the young and connected teaching staff clearly comes from the inspirational and hands on leadership of Principal Gonzalez, a very down to earth man who loves his job and his life. 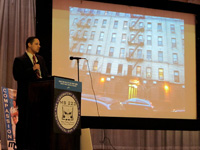 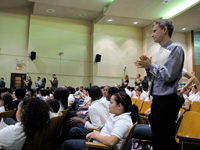 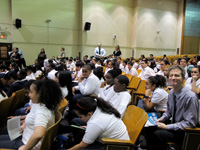 Heading to Queens via the bustling Bronx streets and the bleak infrastructure of connecting bridges and roadways, the diversity of the city -- citizens, architecture, housing, retail shops, houses of worship and signs -- something emerges for me that I don't experience in my Manhattan-centric life. I intellectually understand the range of economic and ethnic realities, but I rarely experience it close up. This day, of seeing a range of neighbors from city employees in libraries and schools to the parks, legal, and transportation departments is an amazing behind the scenes tour of the people who are the glue in keeping the city together. 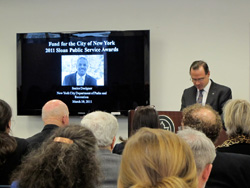 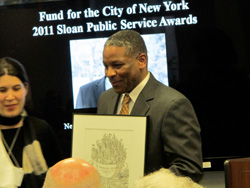 We met Emmanuel Thingue, Senior Designer in the Department of Parks & Recreation in the Olmstead Building, which was built for the 1964 Worlds Fair as a temporary structure. It is home to "park magic" and over 400 landscape architects, designers and engineers. His work was described as "transformative" with precise attention and enthusiasm for details large and small; overcoming restrictions with innovation and beauty. Awards Selection Panelist Michael Arad described recreation as "the most human part of life, from the joy of victory at soccer to reflection on a bench." Seeing photos of Mr. Thingue's creations makes me want to drink at his water fountains and run under his spray showers. The unabashed praise from his co-workers, "a mentor, leader, no ego, selfless, humble, encouraging, open, happy" serve as a checklist of character traits we'd be happy to have just a few of in ourselves or officemates. 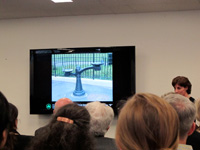 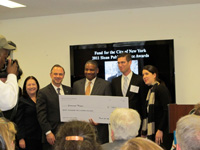 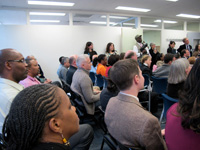 On to the Queens Library to honor Susan Dalmas, Director of Adult Literacy Programs, and to experience "the power of helping others learn, who are afraid to ask for help," explained Panelist Georgia Boothe. Mary McCormick summed it up, "Passionate public servants are long distance runners. 24/7, year after year, decade after decade, inventive, creative, selfless." Ms Dalmas shared her thoughts: "Do what you love to do. There is always something to be done. Always something to be done better. And keep trying till it works. The secret behind success -- Never say no." And as a result of her efforts, the Library is a learning center for all ages, opening doors via a broad range of literacy programs in Health & Literacy, Adult Learning, ESOL/Citizenship, GED Program and Family and Youth Literacy. 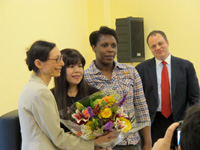 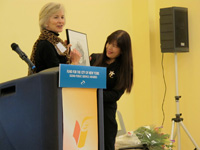 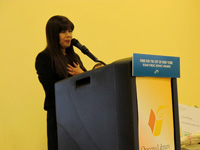 Returning to Manhattan was oddly jarring. The tangled inconsistent streets of Queens segued into uniform blocks with standardized buildings. Whereas we entered the Bronx and Queens locations with cursory surveillance, we practically needed passports to enter the offices of DOT and NYC Law Department. From the over 150 languages spoken in Queens, to the homogeneity of Manhattan, the scope of the city struck me once again. And yet, meeting Henry Perahia, Chief Bridge Officer for DOT, was another revelation for this 3rd generation NY'er. There are 786 structures owned by the city -- the bridges, tunnels and culverts, and Mr. Perahia oversees them. It was a glimpse into a world behind the scenes and the men and women who make sure we are NOT thinking about our infrastructure because it is their job to keep it from making headlines. Mr. Perahia never intended to make public service a career. That was 27 years ago. He discovered that people are smart and motivated to do the right thing. He was receiving the award on behalf of the collaborative team -- his second family. He described an "ethical responsibility" to pass on healthy bridges to the next generation. 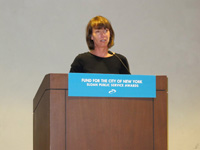 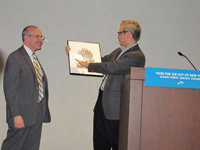 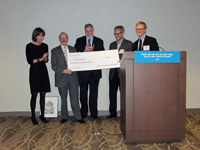 The final stop was the New York City Law Department, by far the most buttoned down environment of the day. And yet, a family spirit was tangible as the staff gathered to honor Gabriel Taussig for his excellence and humanity. The range of legal matters before the department is mind boggling in scope -- from use of streets, parks, defending landmarks, building and fire codes, regulation of restaurants, clubs, newsstands, vendors and every facet of city life. A Willy Wonka factory dedicated to legal resolution -- how do they keep it organized? And in the middle of what could be chaos, is a man referred to by Bishop Joseph Sullivan, Chair of the Selection Panel, as "a wise man." Lauded by his colleagues as dependable, creative, low key and effective; and the person sought after by agency heads, general counsel, commissioners and mayors -- Mr. Taussig is "everyone's favorite lawyer." 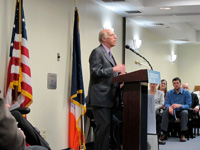 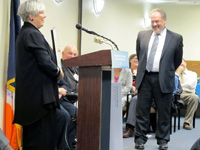 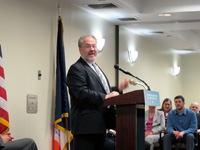 It was the end of a long day for us, the visitors, and for the lawyers in what must be a very busy office. Mr. Taussig was low key, appreciative of the honor, which he attributed to the collegial environment. I don't think I expected him to say anything different. An amazing public servant dedicated to making our lives fair if not better, without fanfare or the kind of salary a lawyer of his caliber would make in the private sector.

For a visit to the public side of the city, I discovered a universe I had never stopped to think about before. It is why it works and why we love living here. I don't think I will cross a street, ride my bicycle, complain about a pothole, or pay my taxes without thinking about the people who keep it all ticking.

Here is where you can nominate an outstanding public servant for the next awards in 2012.