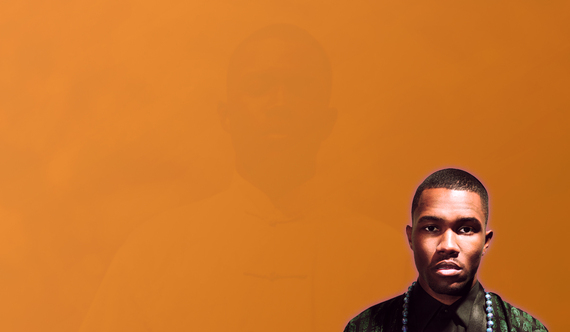 It's 2016 and I, a grown man at the age of 27, spent at least 8 of my waking hours watching a video that's on a website that links to another website that links to another code. Then, like some sort of savant internet age Columbo, I poked at about five different news articles that led me to blogs, that led me to Twitter feeds, but surprisingly not to some basement where Kevin Smith from Die Hard 4 was running a three computer set up and was feverishly trying to unravel a grand Frank Ocean conspiracy. Is Boys Don't Cry actually coming out this Friday? Don't toy with me Frank. Just don't. I am a man. I might cry.

In the current day and age of the internet, online music piracy and Twitter news cycles, releasing an album an old fashioned way seems actually refreshing. You know, setting a date for when it's supposed to come out, marking that date on your calendar, recording tracks all the way up to that date then packaging them neatly on whatever streaming service gave you more rupees for time-exclusive rights and letting it go into the world. Everything else seems inexplicably played out and old, like Will Smith's acting career. Which is why I am still amazed that Frank Ocean's newest opus release saga managed to smash through these conventions like some sort of sonic Kool-Aid Man.

When Beyoncé dropped her self-titled album a few years back, the whole of internet went collectively nuts. It seemed insane that an artist of Beyonce's magnitude can release a major album that would be available to you that very night, from the comfort of your couch without as much as a word of warning and without anyone knowing. This level of not cultural shock has not been documented since people tried I Can't Believe it's Not Butter and refused to believe it wasn't actually butter. I don't know who runs Bey's publicity team, but based of the fact that absolutely no news leaked surrounding TWO (2!!!) of her major releases, Hillary Clinton should hire them immediately as her executive email overseer.

Since then, the "surprise album" has become almost a staple in the world of music. Drake did it. Then someone else did it. Then the garage band down the street from your house that practices at 3am did it and it wasn't just as cool anymore. The cultural cache of the surprise release was done. Dropping new music unexpectedly is fun as long as it's good music. No one would is shocked or unexpectedly elated when a pile of hot garbage lands on their porch at 11pm on a Thursday night.

Following the death of the "surprise release" other artists tried to elevate the way they let you listen to their music. Some think that making you work for it is the answer. What other reason would there be for dropping an exclusive on Tidal other than wanting to see your fans laboriously circumvent subscription rules and free trials just for access to your craft you megalomaniac you. But I guess you have to dig through shit to find some gold.

Kanye West, or the auteur version of Kanye West when even talking to yourself out loud in public is too mainstream tried the "non-release." He released an album, but he really didn't. If a tree falls in the woods does it make a sound? If your album is a Tidal exclusive, does anyone hear it? But not only did he hid it away from the world on Tidal after premiering like six cuts at Star Wars inspired, if not straight up plagiarized, fashion extravaganza in the middle of auteur Mecca he never actually released the album. Sure you can now purchase a physical copy of it, sure you can download it in all entirely, but considering that there are at least six versions of at least five tracks floating around on the web, is this album really complete? Who's to say that a whole new Life of Pablo with a whole new (and hopefully finished) version of Wolves, three extra tracks and some sort of digital karaoke sing-along component that encourages you to yell into you iPhone like an idiot won't drop this November?

Anyways, as you were, which gets us to two more releases that weren't actually releases or were releases for something else entirely. Kendrick basically dropped a bunch of raw cuts and called it an album (arguably still better than most albums) and Beyoncé did her whole shtick again. Except this time you kind of knew something was coming? With Formation heating up the sound waves the suspicion was in the air. The biggest difference here is that I can't quite tell whether or not she was releasing her directorial debut on HBO (unprecedented partnership for a musical release I must note), an album, a manifesto or a weird hybrid of all three. What matters though is that Beyoncé closed the loop on the "surprise" release. She started it, she finished it, in style. So now we can go back to our regular scheduled programing. Or can we?

This brings us back to Frank Ocean. Oh Frank. Stop playing with me. Agent Orange decided that it was time to morph literally everything that we know about music releases and just give us a hybrid. First, we had about 15 various release dates with the most conclusive one being last July (still a very definitive reason on why I have trust issues). Then we had extended silence. I felt like we were being punished, like when your mom won't talk to you and you don't know why so you kind of just have to figure it out on your own. Then, Frank got even more cruel, starting guest features but never actually teasing new music, just letting us know what we were missing. And now we're here.

The date seems to have been set and this Friday may be as close as we come to listening to Boys Don't Cry. Unless Frank changes his mind again. On Sunday night, boysdontcry.co updated itself with a video, leading to the internet loosing it's mind a collapse of at least one small economy as grown people watched their screens with anticipation, some (like me) until 3am.

In case you're wondering what you're staring at, it's a workbench inside a warehouse. Since the launch of the video/link on the site, we've been treated to small tidbits of news and information. Someone cracked the code and discovered a photo of Frank. A man came in and worked on what I am assuming to be a plaque holder for the inevitable moment this album goes triple-adamantium. Classical music replaced ambient noise for just long enough to make you wonder if you were actually losing your mind. Now we're back to ambient noise. We can't leave now. We're so close.

when your mom says wait in the car, I'll be right back and just bounces for a few days pic.twitter.com/PJ4bk0hMp2

The point is, we can spend the next week scrutinizing every aspect of what's about to happen, surrendering our productivity for a sliver of hope that we might hear a snippet of a sample of a vocal of a new Frank Ocean song. Or we can accept that we're staring at two workbenches in an empty room and try to get on with our life until Friday. My rational mind is telling me to do the latter, but every single ounce of my being is making me do the former. I don't think I closed the window yet. Congratulations Frank you broke the release blueprint. Why are you doing this to me?!

At the end of the day, I want to be able to say that I am not getting my hopes up. I have been here before. I have been hurt by you before Frank. It's hard for me to trust again. Yet, here I am, staring at a black and white workshop hoping that you will pop in at any moment and reassemble my emotions using a buzz-saw, some plywood and duct tape like some sort of musical McGyver. Make me trust again. Release Boys Don't Cry on Friday. Because if you don't, I just might. Again.