Native New Yorker, Neil Blumenthal was taught to value community at a young age while attending a Quaker school in Manhattan. Combine that with his background in international relations and conflict resolution and it's not hard to see why Neil developed a global awareness that has really lead to his success as an entrepreneur and a philanthropist. 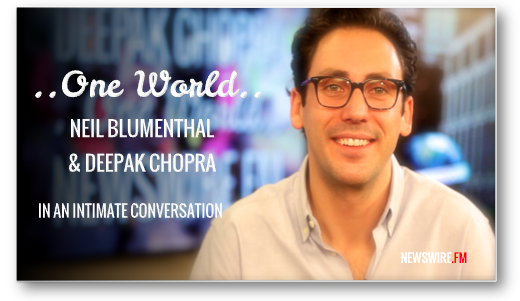 After his schooling, Neil realized that policy making was not where his passion lay. "I was somebody that really wanted to get their hands dirty," He explains to Deepak Chopra in their One World interview. "And sort of effect, impact and have direct interactions with beneficiaries." That's when Neil found VisionSpring; an organization that teaches women in the developing world how to administer an eye exam and then gives them the tools to distribute glasses to those who need them. It's a model that relies less exclusively on charity and works more to create an economic structure for long term success in developing countries.

With his time at VisionSpring in mind, Neil and his friends created the eyewear company Warby Parker. The simple theory behind the Warby Parker business model is that consumers have a vested interest not only in filling their own needs, in this case with a pair of glasses, but they are also interested in giving back. Each time a customer buys a pair of glasses from Warby Parker, they are also making it possible for a pair to be distributed to a person in need through Warbly Parker's support of VisionSpring.

Perhaps too humbly, Neil Blumenthal declines to be referred to as a social entrepreneur, but rather he likes to see his work as supporting others, like the founder of VisionSpring, to more effectively carry out their mission. He has certainly found a simple and effective way to do that. When the customer is given a clear and easy way to give back, they will usually take it. By capitalizing on this impulse, Neil has not only created a hugely successful business but also helped to vastly improve the lives of people across the globe by giving them dignified careers and helping them to see.