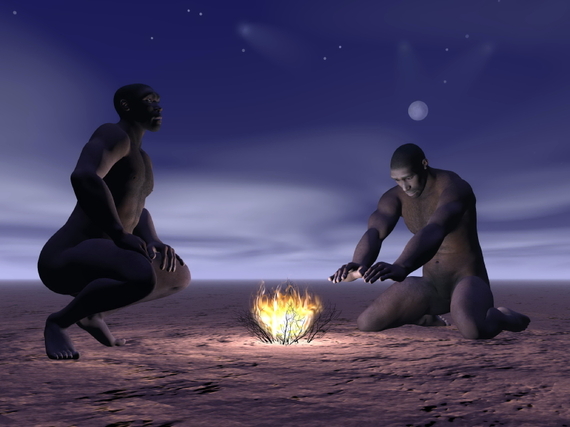 A priest, a penguin, and a newspaper reporter walk into a bar. The penguin orders a shot of Red Eye. The priest starts juggling three flaming chain saws. The newspaper reporter turns to the bartender and says: "I know there's a story here somewhere."

And yes, there is. There are stories everywhere. As the poet, Muriel Ruykeser once said, "The world is not made of atoms. The world is made of stories."

Almost everyone in business these days -- at least the people responsible for selling big, hairy ideas -- knows that the difference between success and failure often depends on what kind of story is told -- and how well. Content may be King. But it is Story that built the kingdom. Or as Steve Jobs once explained, "The most powerful person in the world is the storyteller."

The question, these days, isn't whether or not storytelling works. It does. It's worked for thousands of years. If you have any doubt, just ask your local neuroscientist. The question is how do you tell a really effective story -- one that not only informs and entertains, but gets results -- the kind of results that opens minds, influences behavior, and is remembered. And this is precisely where the proverbial plot thickens. Why? Because most people don't think they know how to tell good story. At least, that's the story they keep telling themselves -- that they don't have the chops or experience to tell a good story. Spoiler alert! Not true.

Social scientists tell us that 65% of our conversations boil down to story -- narrative accounts with a beginning, middle, and end. Throw in a likable hero, a setting, some obstacles, a few juicy details, plot twists, and a resolution, and voila, you've got yourself a story! Simply put, storytelling is "an unconscious competency" -- something human beings naturally do. The thing is -- we don't know how we do it. Like breathing, for example. Or thinking. Or riding a bicycle. But just because we can't explain how we do it, doesn't mean we're not good at it. Kapish?

You already know how to tell a story. You do. You've been telling stories ever since you were a child. In fact, you tell stories many times a day. On the job. Off the job. Hanging out with your friends. Wherever. Story is in your DNA. Indeed, neuroscientists like to say that the human brain is "wired for story." It's how we make sense of our lives. It's our communication default position. We are storytelling animals. And the more we practice, the better we get.

The simplest explanation of what a story is? A narrative -- an account of what happened or what might happen. That account, of course, can be utterly boring ("I woke up. I picked up my dry cleaning. I went home.") Or it can be utterly captivating -- what every movie you've ever seen or novel you've ever read has tried to accomplish. To capture your attention. To deliver a meaningful message. And to influence what you think, feel, and do.

For the moment, think of storytelling as a big, yummy pot of soup. It smells good. It looks good. And it tastes good. But at first glance, you can't tell what the ingredients are -- or the spices. Do you really need to know every single ingredient if you're being served a bowl of soup from a reliable source? Probably not. But if you're making the soup, you most definitely do. So let's sit down with our penguin, priest, and newspaper reporter for a few minutes and see if we can demystify what this whole mumbo gumbo story thing is all about.

First things first. If you want your story to pack a wallop, you've got to know your audience. If they're allergic to eggplant, don't put eggplant in the soup. If they're vegetarian, lose the chicken. And know your end game -- what it is you're attempting to communicate -- what you want your audience to think, feel, or do differently after listening to you. Whatever message you want to leave them with, be able to boil it down to 10 words or less.

Years ago, this would have been known as an "elevator speech". These days, if you can't deliver your message upon entering an elevator, you're screwed. Think about it. When Steve Jobs launched the iPod, he cut to the chase by distilling his message down to just five words: "1,000 songs in your pocket." That's what the iPod was. Technobabble? No. Overwhelming factoids and data? No. One clean sound byte surrounded by a compelling beginning, middle, and end. When you think about the story you want to tell, be sure you can distill it down to a memorable meme -- what screenwriters do when they pitch their idea to a movie studio.

Just like the iPod has a shape, so does a story - the beginning, the middle, and the end, as I've said before, but I'm saying again because I want you to remember just how important structure is. It's the spine of your intended result.

The beginning is where you set things up -- the place where you hook the attention of your audience, the place where you set the scene and introduce your hero -- hopefully a likable one. Then you introduce the Big Bad Wolf -- the obstacle, the conflict that begets the drama - which, in your case, if you are trying to sell a product or service, might be the competition, a government regulation, or the cost of entering a new market. Get the picture? Someone or something exists and that someone or something wants to move forward towards an inspired goal, but his/her/its path is blocked. Time for nail biting and some popcorn. Hooray for adversity! Without it, there is no story. No Star Wars. No Rocky. No Three Little Pigs.

No matter how logical, linear, or analytical your audience might be, unless you can speak to their heart, you will never win their mind. Yes, of course, if you are making a business presentation, you will need to spice up your story with the fruits of your research, but only enough to keep the story moving, only enough to soothe the savage beast of the left brain. Data is the spice. It is not the main ingredient. If your audience isn't feeling what your saying, it doesn't matter how many statistics you throw their way. As Einstein said, "Not everything that counts can be counted, and not everything that can be counted, counts."

It's Little Red Riding Hood on her way to Grandma's house that we care about, not her shoe size or SAT scores.

Other things to be mindful of as your prepare your presentation? Keep your stories short. Speak in the language of the people, not the technologists. No one wants to hear an epic poem. What you're trying to do by telling a story is create an opening to drive the Mack truck of possibility through and maybe pick up a few hitchhikers along the way. You are building a bridge, not a shopping mall.

Lose the complicated back story. "The world doesn't want to hear about your labor pains, they want to see the baby," said Johnny Sain, an American right-handed pitcher for the Boston Braves, born in 1917, who was the runner up for the National League's Most Valuable Player Award in 1948 after leading the league in wins and compiling a lifetime ERA of 3.49 -- the last pitcher to face Babe Ruth). See what I mean? Your team may have put a lot of effort into the project. Months of work. That's great. That's nice. Show us the baby!

And please don't read from your PowerPoint slides. Not only is that boring, it's rude. Borderline inhuman. There's no way in the world you can build rapport and "read the room" if you are staring at a screen. If you want your audience to look into the future, you've got to look into their eyes, not one boring slide after another.

Here's something to think about: If you really want to get the attention of your audience, "violate expectations." Like what Bill Gates did when, in the middle of a keynote presentation on malaria, he released a bunch of mosquitoes into the room. Talk about buzz! At the very least, infuse your presentation with some visual buzz - analogies and metaphors that paint a picture for your listeners - something they can see, not just hear about.

And when you want to crank things up, ask a compelling question or two. Then pause and listen to the response. The more you listen, the more your audience will listen. Know that a good story is also a good performance. So, unhinge yourself from the dead zone - the spot on the floor to which you have nailed both of your feet. Move around the room. Vary the lengths of your sentences and the volume of your voice. Gesture. Make facial expressions. Speak to one specific person at a time, not the generic "audience." But above all, trust yourself. If you don't trust yourself, no one else will.

Of course, you can only trust yourself, if you are prepared. So practice your ass off. Know your talking points. Write out a script. Understand the flow of what you want to say, the key milestones along the way and whatever anecdotes and facts you want to include. Then distill the whole thing down to few main points on note cards. Get the story in your bones. Then throw your note cards away. Or, if you absolutely need to hold onto your note cards, glance at them only occasionally. Otherwise, they will become a rectangular 3x5 PowerPoint show in your hand, yet another slow leak in the bucket of your storytelling brilliance.

Remember, there is no formula for telling a good story. Only guidelines. And there is no one right way to tell a story. There are thousands. Maybe millions. Or billions - each one according to the style and personality of the teller. Your job is not to tell a story like Steve Jobs or Garrison Keillor or Winston Churchill. Your job is tell a story like YOU! And while it is perfectly fine (and often, useful) to read books on storytelling, study TED videos, and attend cool workshops, in the end, all you need to know is this...

You are sitting around the tribal fire with the elders. They want to hear from you. You've been on a big adventure for days, weeks, or even months. You've got important news to share with them, vital insights to reveal, memorable experiences to convey. The survival of the tribe depends it. You're not trying to get promoted. You're not worried about being cast out of the tribe. The only thing that matters is telling your story in a way that informs, inspires, and enlightens.

Mitch Ditkoff is the Co-Founder and President of Idea Champions, an innovation consulting company headquartered in Woodstock, NY that uses storytelling as a way to help people go beyond the status quo and enter into states of heightened creativity. Mitch's new book on the topic, Storytelling at Work: How Moments of Truth on the Job Reveal the Real Business of Life won a bronze medal in the 2016 Axiom Book Awards competition.