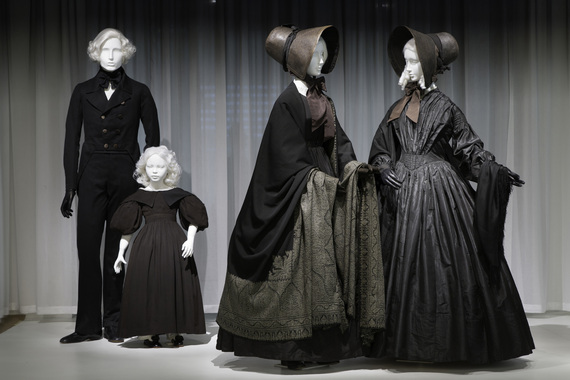 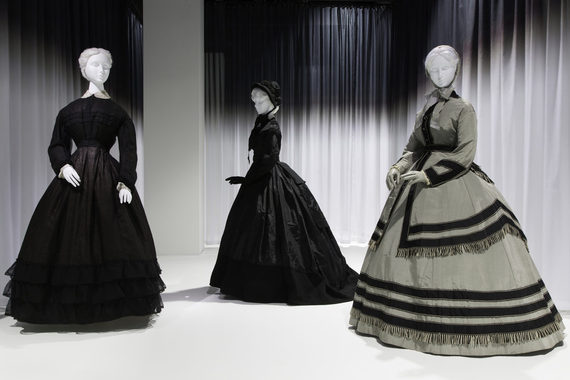 "Widow's weeds" originally intended to simplify the female form and shroud a woman's grief, but the Metropolitan's new exhibit "Death Becomes Her" proves that these ensembles did just the opposite. The sable dresses and veils not only externalized the woman's emotions but also made the woman appear more sexualized and mysterious.

"Black is becoming: and young widows, fair, plump, and smiling, with their roguish eyes sparkling under their black veils are very seducing," writes Robert de Valcourt in The Illustrated Manners Book from 1855. The quote, among many others on widowhood, is projected on the walls behind the lacy black gowns, fading as Victorian silhouette shadows walk in front of the text.

Black will eternally be slenderizing and chic, but the art of mourning fashion is much more complex than donning the absence of color. There were three formal stages of mourning for those wealthy enough to afford new clothes to commemorate their dead loved ones. The first stage involved heavy veiling and simple, almost nun-like fabrics that emphasized piety and restraint. After a few months, women began incorporating more exciting fabrics such as silk into their mourning attire, eventually including other darker hues such as greys and purples, or combinations of black and white for "light mourning."

Queen Victoria, who mourned her dead husband for life, exemplified the melancholic, macabre feeling that pervaded the late 19th century. Mourning became increasingly trendy. Hair jewelry made from dead loved ones was sought after and lacy black parasols and fans became ubiquitous mourning accessories. "Eccentric" women who weren't even in mourning began wearing black all the time, and some widows extended their mourning period in order to wear the fashions longer.

"When we see ladies persist in wearing sable, we are reminded of the reply a young widow made to her mother: "Don't you see," said she, "it saves me the expense of advertising for a husband," writes DC Colesworthy in Hints of Common Politeness.

Widows occupied an interesting space in the 19th century which, even if you were privileged enough to be wealthy and white, still kind of sucked for women. In their onyx veiled costumes, they resembled anti-brides, not virginal yet still socially respectable. 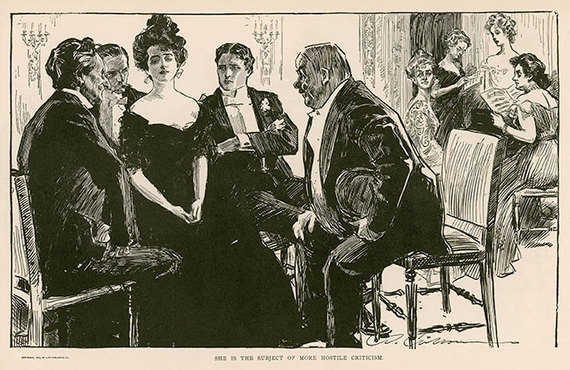 The cartoon "A Widow and Her Friends" by Charles Dana Gibson sardonically illustrates how widows were sought after by men. The illustrations depict a young widow surrounded by potential suitors, represented as both alluring and dangerous. "They Go Ice Skating," for instance, shows a group of men falling into a pool of ice water as the widow helps them out, subtly hinting at a gender role-reversal.

"Death Becomes Her" will be at the Metropolitan Museum of Art through February 1.