Winfred Rembert, whose work is the subject of a large exhibition at the Tillou Gallery in Litchfield, Connecticut, discovered his artistic métier while serving on a chain gang in a Georgia prison. A black man who had spent his childhood picking cotton at his great aunt's side, he had been arrested at a civil rights rally in the 1960's, and given a sentence of 27 years. During the first days of his incarceration, an attempt was even made to lynch Rembert, an attempt that failed. Later, Rembert met a fellow prisoner who had learned the craft of tooling leather, and was now making hand-decorated billfolds. That man taught Rembert the basics of working in leather, skills that he carefully honed.

Because of his eventual status as a model prisoner, Rembert's sentence was shortened to seven years, and he was released. He and his wife Patsy Gammage subsequently raised 8 children while Rembert worked as a longshoreman and heavy equipment operator.

One other thing he did well was to tell stories to his children and friends about the remarkable experiences of his youth in The South, in the cotton fields, in church, in the black section of his home town Cuthbert, Georgia, in juke joints and, of course, on the chain gang. Patsy suggested that her husband return to leather tooling, and that he tell those same stories in visual form, using leather as his surface.

Therein lies the beginning of the career of a very fine artist who now, at the age of sixty-seven, is a rising star in American art. 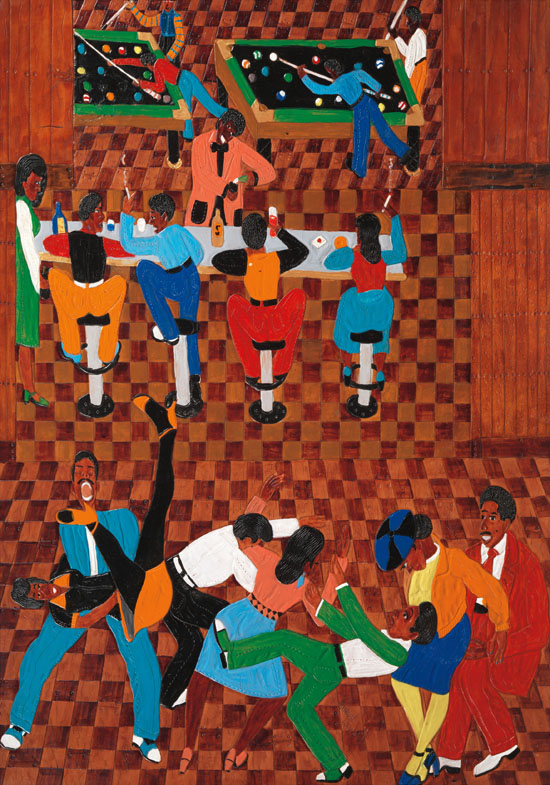 The Adelson Galleries in Manhattan presented a show of Rembert's recent work in 2010. In the fine catalog of the exhibition, Warren Adelson writes that "Rembert draws heavily from his own experience, populating his paintings with pool sharks, reverends, midwives and chain gangs, all of which come to life with the richness and vitality of oral tradition. The scenes range from cotton fields to nightlife. Each is as finely detailed as it is emotionally powerful."

Adelson also writes that "his childhood was marked by deprivation, fear and violence, and his survival is a testament to his courage, character and huge heart. Winfred has the precious human quality of forgiveness, and it has saved his life."

When the viewer is presented with artwork of such strong social content, it is tempting to dwell primarily on that content and treat the artfulness of the work as of secondary importance. That would be a mistake in the case of this man's art. The care with which Rembert's compositions are made is remarkable given the difficulty in working in leather with many different kinds of sharp-pointed tools. Intaglio printing presents a similar challenge, in which the single line, literally gouged from a metal plate, must carry all the weight of the composition, be it as simple as one single line or as complicated as a Rembrandt landscape. The line is the beginning and end of the composition, and must be drawn with utmost care and a deep respect for the consequences of making a mistake. 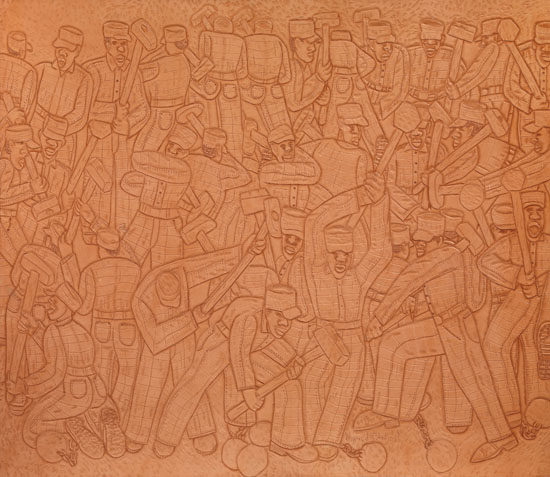 In Rembert's work, the line is all important, and if you look closely at his Chain Gang (All Me) from 2005, you can see the intensity of his self-confidence especially in the delicacy of touch that brings so many of his compositions alive. All the formal training in the world won't save your pictures if you do not have a well-developed sense of how to make an image powerful. This too, to some extent, can be learned, but without a nascent sense of composition and how different shapes and forms play off one another, balance one another or provide a startlingly original lack of balance that stirs the heart, the picture will not be successful. Winfred Rembert's art has all those essential qualities.

The striking colors that are also so much a part his compositions come from leather dyes. It is a wonder to see such successful use of so industrial a product as that provided for shoe leather. 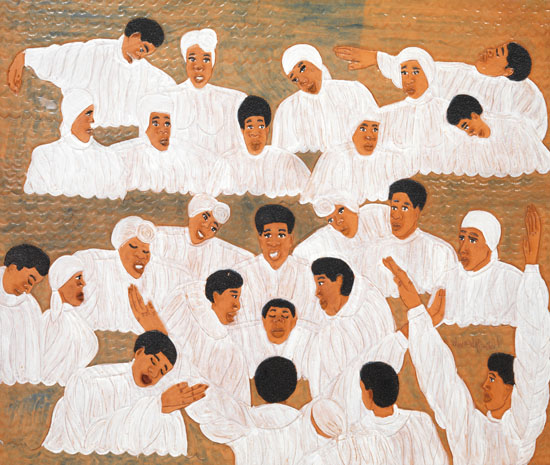 There is a personal connection as well between Jeffrey Tillou, owner of Tillou Gallery, and Winfred Rembert. The artist had introduced himself in 2000 to Jock Reynolds, who is Director of the Yale University Art Gallery. He simply wanted to show Reynolds an unfinished piece that he had, rolled up beneath his arm. Reynolds was so impressed by what he saw that he offered Rembert an exhibition in his gallery. In 2002, though, Rembert had to stop working in industry because of work-related injuries. Worried about how he could support his family, he turned to an acquaintance, the noted art dealer Peter Tillou. Having already recognized Rembert's profound talent, Tillou began buying paintings from him, effectively providing the artist with the funds he needed to keep going. That financial support continues to this day, and it happens that Peter Tillou is Jeffrey Tillou's father.