It was a beautiful morning in Long Island City when I visited the headquarters of Frava, a natural energy juice. I arrived with one of their beverages in hand, Cranberry Orange, and was already felt a buzz of sugar and caffeine. Truth-be-told, I was never one for energy drinks, but there's something different about Frava. As founder Evan Berman and CMO Alex Portin are quick to note, Frava is in a league all its own. Alex is the marketer and self-described "funny man," while Evan is upfront with buyers, producers, and... bloggers. 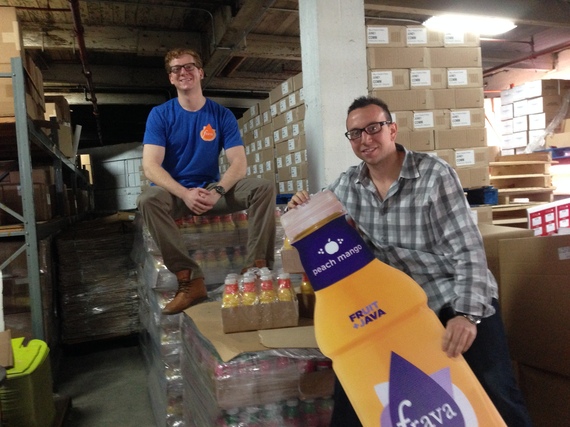 Alex Portin and Evan Berman in the Frava warehouse. Photo by Alex Schattner.

Alex Schattner: What did you study in school? Did it prepare you for this?

Evan Berman: Alex and I met while studying Liberal Arts at Colgate [University]. I came up with the idea for Frava during finals when I needed an energy boost, but preferred fruit juice to coffee. Frava is a fusion of Fruit + Java. Alex joined a little later.

Do your roles ever over-lap?

Evan: Definitely. When it came to branding/packaging, we had to decide what Frava was. Was it competing with Vitamin Water, Tropicana, or Red Bull? The answer was... all of the above. A consultant told us not to emphasize "energy" on the label. We didn't want to be lumped in with other energy drinks given how different our product is and all the negative publicity and social stigmas associated with them. We made the mistake of listening to the consultant. Next time we're probably going to make the word 'Caffeine,' and the fruit images, larger.

Alex Portin: But we've been lucky. Having less funding early on kept us cautious.

Evan: Our largest mistakes have cost tens of thousands instead of hundreds of thousands, and none were debilitating.

Evan: And getting it on to shelves. We probably wouldn't have gone into the beverage industry if we understood how cutthroat it is. Our lawyer can be overly cautious when it comes to distribution. He thinks everyone is out to crush us, and he's sort of right. You don't want to get tarped. So, we have to be cautious, but decisive. Otherwise, we crush ourselves.

Alex: Tarping is when a distributor acquires the rights to sell your product in a certain region, but doesn't follow through, because they've partnered with a bigger brand, like Red Bull. It's similar to buying a competitor to shut them out. 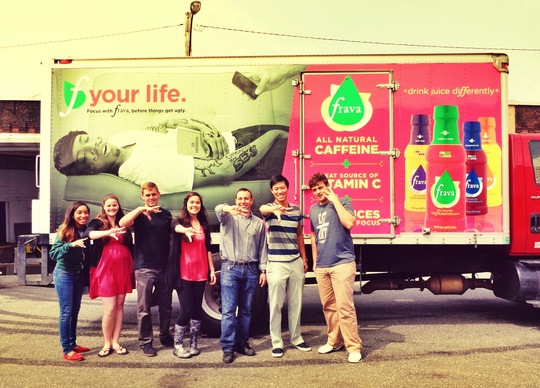 Getting the word out. Photo by Alex Portin.

How many flavors did you start with?

Evan: We started with one flavor, which we actually don't produce anymore. Finding the right mix of juices was important. A mix of orange juice and natural caffeine (extracted from green coffee beans) no longer tastes like orange juice, and that might confuse people. On the other hand, when you mix several juices together, people just decide whether they like the taste or not. We have four flavors right now. My favorite is Peach Mango.

How much product do you make?

Evan: When moving Frava into new markets, it can be very difficult to predict order sizes. Even once you get the first order--Say, they order a full trailer (twenty-four pallets)--there's no telling if they're going to order that again. You have to make a call. In the last year alone, we've gone from selling one case (12 bottles) at a time to selling by the pallet (102 cases). We work with drink plants across the U.S. to save on shipping and machinery costs. For perspective, it doesn't even pay for Snapple to always produce in-house.

How do you market Frava?

Alex: Our biggest promotional strategy is just getting Frava into the hands of our 18-35 demographic. We've had great luck hopping on trends. For instance, Evan and I went down to Dominique Ansel's bakery during the cronut phenomenon and handed out free bottles to people waiting on line. Getting out there, and sharing with and educating customers is the best thing.

Evan: When we're allowed on college campuses, the student's love it. It helps that Frava isn't geared to a specific gender like Rockstar, Four Loko, [etc.]. Unfortunately, some colleges have anticompetitive "exclusive pouring rights" with certain brands. Not only can Frava not be sold on those campuses--despite being a healthier option--but we also can't offer their students internships.

Evan: It's important to get used to rejection, but it's funny. You could walk into a tiny store, and the owner might say, "Who the hell are you? We don't need another product in here," but then a major retail chain might take a chance. We started with local stores, and now Frava's on the shelves of the Midwest's largest convenience store chains. Soon Frava will appear in Target's in California and New York.

Congratulations! I could see the drink doing great in San Francisco.

Alex: Techies need a lot of energy. One of the best comments we've received was from an employee at Linkedin who said his co-worker, "stocked up on Frava like the apocalypse was coming.

What does Frava have planned for the future?

Evan: We're looking to expand further, but that takes more funds. That's why we created our Indiegogo campaign. Now our families, friends, and fans--who hopefully love the product as much as we do--can get involved.