This week, I interviewed Jared Waks, lead actor and co-writer for the web series JewDate. He filled me in on the joys and struggles of bringing a character and a production to life.

How did the idea for the show come about?

Jared Waks: We (Aaron Webman, Jason Mittleman, Ethan Webman and I) found that a lot of our friends have, at one point or another, allowed unrequited love interests treat them like lap dogs. The love interests don't do it maliciously but, rather, out of insecurity -- needing to feel wanted, even if it's by someone whom they don't want in return. In addition, people are afraid of being alone and like to keep other people as back-up plans. Regardless, it's hard to be strung along by someone that you really like, and it usually lands you in a real rut. That is the inspiration behind the Noah-Kara dynamic at the center of JewDate.

Of course, every hero needs an emotional journey, and Noah's leads him through the tumultuous world of online dating. With the help of Noah's converse, his roommate Adam, Noah may be able to escape the siren call of Kara, and find his happy ending.

Great, but exhausting. In order to film the date scenes in restaurants, we have to shoot during their off hours. One day, I worked at IMAX until 7:30 p.m., went home and had dinner at 8:00 p.m., slept from 10:00 p.m. [to] midnight, then got ready and drove 45 minutes to be at the restaurant by 1:30 a.m. for prep, then filmed from 2:00 a.m. until the restaurant opened that afternoon. I always sleep REALLY well after we finish shooting a season.

What has been your favorite moment/episode?

My favorite moment is the "French flashback" in Season One, Episode 3: "Digital Architect." Aaron directed it absolutely beautifully, and I think it's a very genuine moment that reaffirms to the audience that they are rooting for Noah because he is a hopeless but also hopelessly adorable romantic -- creative and dedicated. I also like it because it is one of the best examples of how Noah's online dates, despite being disasters in and of themselves, are helping him grow and learn to be the kind of person that will be worthy of his real soulmate when he finds her.

My favorite overall episode is Season 2, Episode 2, "Rob's Return: Nuts and Stabbing." I love the hints and eventual reveals that take you by surprise, though you look back and think, "I should have seen that coming." Willie Warren James Jr. is absolutely hilarious as well. 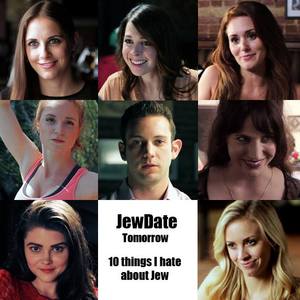 What's the biggest risk you've had to take?

I would say that everything we've done that was worth doing was a risk. Some of the hardest hitting jokes were those that we worried might be too edgy or offend people. Every time I send an email out to friends and family I risk overplaying my hand and turning them from supporters of my work and me into annoyed recipients of perceived spam. Yes, I do believe it's possible to spam our loved ones, and everyone should be careful not to be a FamSpammer (pending trademark). Seriously, that may not sound like a big risk, but I think it's huge. Your network is your biggest asset, whether you're looking for a job or looking for people to support your latest project/product. You do not want your network to feel like you are using them and to start ignoring your communications.

The monetary "risk" is pretty big, too. Although, I think of it as more of an investment, since I knew going in that the money spent towards the production would likely not be recouped. While we hope that the show attains distribution and becomes profitable -- thereby earning us back the money we put into it -- we looked at this from the beginning as a first step in gaining recognition and credibility for our team as a content production company, securing us future financed projects.

What's it like starting a show, and basically a production company, from scratch?

My initial involvement with the show was supposed to be much less. They approached me in a writing capacity, and I was very excited to write the show. I was currently studying for the GMAT and busy with full time work at IMAX, so I told them I'd come to set when I could to watch them film, but probably wouldn't be there much. After we'd written the script I felt so attached to the project -- we just loved the episodes! So, when they asked me if I wanted to produce as well, I said, "Yes!" Then they twisted my arm into playing Noah.

So, I had very few expectations going into the project, and pretty soon I was taking off tons of time from work and going all-in on JewDate. It was exhausting and AMAZING! Starting something from scratch with a small team that works well together is so rewarding. I felt so excited by every little success (every view, every like, every laugh).

I don't want to, at all, imply that I should receive much credit for starting a "production company." I was able to really focus on writing (with Aaron and Jason) and acting, because of the amazing JewDate team. Stevee Jo Eads and her experience on real sets like Moonrise Kingdom were invaluable to the production. Stevee was on top of the production with Ethan helping while he also handled all of the contracts, scheduling, etc. Natalie took care of casting, and we had the unparalleled Pawel Pogorzelski behind the camera, making every shot absolutely gorgeous, and many more people were crucial in making JewDate what it is.

How have you promoted the show? Which Social Media platform is most helpful?

Our largest push so far has definitely been a combination of Facebook and Google AdWords. We've had a presence on Twitter and Instagram, but it's been slight. Our Facebook campaign has been most effective at mobilizing our base -- friends and family -- to legitimize the show with its initial couple thousand views. Our Google AdWords campaign more than doubled our YouTube subscribers in just two days. I'm currently at the Search Marketing Expo in San Jose, CA, and I intend to use what I'm learning here to launch new tactics across all platforms -- dark posts on Facebook, very specific AdWords, Twitter ads and, especially, YouTube pre-roll ads.

Are your goals for the show the same as when you started out?

For the most part, yes. Again, when we "started out" I had no idea how big of a production this would be, and I was just a writer. But ever since we went into production the goal has been to find distribution with a Hulu, Amazon, Vimeo, AOL, etc. I guess the one thing that's changed is my belief in my ability to make the show "go viral." I was hoping to hit 100,000 views before pitching to those distribution channels, but I've learned a lot since then. I'm pretty happy with our view count at this juncture and I'll continue to do marketing to help it increase, but I know now what it takes to make a show go viral, and I'm not disappointed to say that our show doesn't meet the criteria. So while the goal -- to get distribution -- is the same, I now believe that the show speaks for itself, and I don't need millions of YouTube views to legitimize it. I'm going to do my absolute best to get decision makers to watch the show and hear our pitch; then come what will.

Catch up on "The Art of Y":
The Art of Y: Redefining the Music Industry

The Art of Y: An Interview With Fashion Designer Catherine Litke

Alex Schattner
Web Developer / Designer / Writer
This Blogger's Books and Other Items from...

The Christmas Department (An Illustrated Folktale)
by Alex Schattner