Have you ever had an idea for a product--maybe even went as far as mocking it up--but then shied away from it due to fears of difficult and costly overseas manufacturing. Tom Kennedy and Ben Gebhardt founded ReFactory in 2013 to waylay those fears. Located in Park Slope, Brooklyn, ReFactory aims to work with young businesses to co-create and locally manufacturer viable electronics. I spoke with Tom Kennedy this week to learn more about ReFactory's philosophy, business strategy, and future vision.

Alex Schattner: When someone at a party asks you what you do, how do you respond?

Tom Kennedy: I usually just tell them I'm an electrical engineer. I prefer not to dive into esoteric technical detail. If someone inquires further, then I tell them what I've worked on in the past.

T: I've worked on medical devices such as EKGs and intra-aortic balloon pumps, which taught me how complex and nuanced living things are. That despite all we know and how much we've advanced, it pales in comparison to what exists in the natural word.

I also led the electrical development of a subsystem on Mars Curiosity while I was at Honeybee Robotics. Making something that leaves our planet is a whole lesson in scale and size. It also taught me that anything can be made, with enough effort, time, and budget. It instilled a quiet arrogance, I guess. I learned that every project has its own feeling of "oh man, is this even possible? How is this going to get done?" And then you just end up getting it done somehow. It's like if someone told me to dig a hole to the other side of the planet--instead of thinking about the impossibility of the task, you just start digging.

A: What was the inspiration behind founding ReFactory?

T: A lot of it is a result of my experience at EnergyHub, a company I co-founded back in 2008. There we worked directly with contract manufacturers in China as a startup in Brooklyn aiming to make a home energy management system. Working with contract[ed] manufacturers in China involves complex technical work, negotiation, cross-cultural interaction, and international travel. The general perception is that making things in China is less expensive and buying parts from different sub-manufacturers is easier. In the end though, the cost savings only work out if you make a lot of product. Startups, who are still trying to figure out how their product fits in the market, are not going to make a large 50,000 unit run. At the low quantities that startups manufacture--say 500-1,000 units--the savings of manufacturing overseas is wiped out by issues of oversight.

That's why people in New York get really excited when they hear they can take a subway ride to their manufacturer instead of an international flight. In the next five years, I think consumers are going to take note too, and buy locally produced electronics just as they do food products.

Our aim at ReFactory is to empower and inspire independent hardware inventors. They will be the engines of creativity and innovation in the future.

A: When did you know you wanted to be an engineer? How did you and Ben make your start in the industry?

T: I've been into engineering as long as I can remember. My parents had this "deal" where any toy I wanted came out of my allowance unless it was educational. I gravitated towards chemistry sets and electronics kits. But I was reflexively taking things apart. I distinctly remember when my parents bought our first VCR. They sat me down and said, "Tom, you cannot take this apart under any circumstances." Eventually, I got to a point where I could put things together.

Ben grew up similarly interested in technology. He went to UCLA and studied electrical engineering. He has designed some of the more famous audio products for large, well-known companies. I am incredibly lucky to work with Ben - he is the best analog electrical engineer I know. He can design things that many engineers really just don't know how to do.

Ben and I consulted for companies large and small and spent 2013 working out of the same space in DUMBO. We looked at the costs companies pay to have their products prototyped or made in smaller quantities overseas. Eventually we said, "Wouldn't it be great if we could just walk out back and make the product on a factory line?" After running the numbers we realized it was possible and how much it could benefit fledging hardware companies and inventors.

We've also had a lot of help from our network in the startup and tech communities. New York offers an increasingly unique and open community for hardware startups. 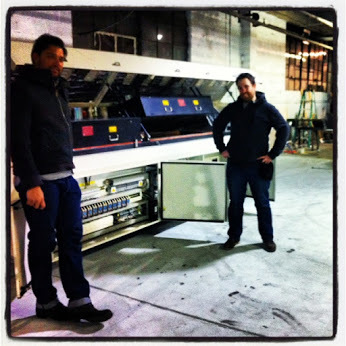 Ben (left) and Tom setting up. Photo from their blog.

A: When in the design process does a client approach you?

T: We get approached in a lot of different ways. Some have an idea on a napkin; others need their fully-baked product manufactured. We prefer to work with companies where we can influence the design--usually earlier on. The main reason is that we can introduce features into the design that make it easier to manufacture the product. A lot of first time inventors in electronics overlook this part, but there is a big difference that exists between a prototype operating on your desk and one that can be made in the thousands.

A: What's the biggest risk you've had to take?

T: The biggest risk was buying, shipping and setting up our equipment. We purchased a fully automated circuit board assembly line from a company that refurbishes the equipment in Chicago. We spent half our available money on this incredibly sensitive, precision-made, robotic equipment. I remember the trucker angrily calling me on the phone while he was driving over the pothole-ridden BQE saying it will be a miracle if the equipment makes it in one piece. Thankfully, the machine was fine.

There is also financial and emotional risk in the uncertainty of starting a new company. This would have been a lot harder if it weren't for my supportive, encouraging wife. Ben and my family are also incredibly supportive.

A: How does ReFactory handle patent information? What information is owned by the client, and what gets added to ReFactory's index of services?

T: This really varies from client to client. Most hardware development is not about a special secret sauce per se. It's applying already known chips and designs into a new product. If a product has some special thing that a company really wants to protect, we fully respect and uphold that; we would not re-use that design without their explicit provision.

For most hardware start-ups, the value of obtaining a patent is questionable. It will usually take a couple million dollars in legal fees to go after an infringing product. That is capital most startups just don't have.

A: Does ReFactory always work for a client, or are there personal side projects?

T: Ben and I are always dreaming up ideas for products we'd like to make, but, to date, we haven't had a free moment to pursue them.

A: What product(s) would you and/or Ben love to work on in the future? Is it close to being invented?

T: We think wearable products are really interesting to work on. We see a lot of them come across our desk. They have interesting engineering challenges and we think they will have a large impact. We are also working on a lot of connected devices. We see requests for about two Bluetooth products a week.

As for future products, I feel [our society] has hit the point where our way of interacting with the internet--through a screen and keyboard or touchscreen--is removing us from the raw experience of life. In the future, we will find ways to engage with the internet that do not interrupt the flow of experience. In five years there will be very few people staring at cell phone screens as they walk; the web interaction will be mindfully integrated into our lives. But those products will be separated among much smaller segments of the market. How one person interacts will be much different than another, and each of those accurately targeted products will have smaller production runs. Because of that, they will need to be made and tested in a way that meets the segmented market demand.

Learn more about ReFactory at refactory.co.