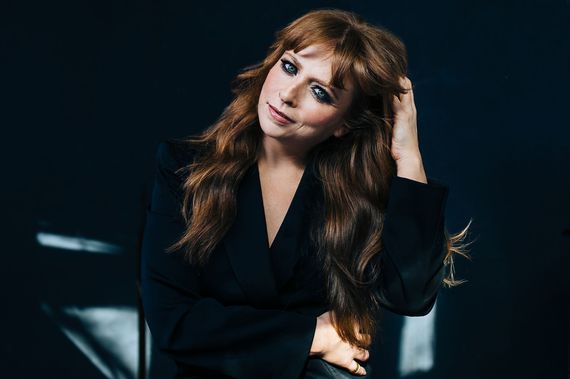 Last year, I had the pleasure of writing about an incredible singer, Maxine Linehan, who is quickly moving up the ranks of cabaret and proving to be one of its most talented performers. That story was about her latest album release, "Beautiful Songs," which was a follow-up to her live album and another celebrating the work of Petula Clark. Now, she's become an artist working in her own reflection. Tonight, Linehan is taking the stage at Paris' famed Théâtre du Châtelet with her show "What Would Petula Do?" There, she'll showcase a new perspective, thanks to her continued experience and growth -- benefitting the audience as much as it does herself as an artist.

"We looked at [the show], and completely reworked it, to be honest," Linehan shared. It was a response to my assessment of her Petula Clark album of the same name,"What Would Petula Do?" While I raved about her recent work, at the time of the article I said that this album "seems restricted to just her pop range."

"I've changed a lot since the first time I did this show," she continued. "Most notably, my voice has changed a lot in the last seven or eight years," she said. "I was listening the other day to the album [recorded in 2008]. It's not that many years, but to me, I sound like a little girl by comparison to what 'Beautiful Songs' sounds like... For me, there's sort of a deeper, richer sound to my voice, as I've gotten older."

Irish born Linehan sings "Where the Streets Have No Name," from her latest show "ONE - The Songs of U2"

Linehan's also performed her Petula Clark show recently in New York at Feinstein's/54 Below as well as on tour. It covers Clark's career from the beginning through her performances on Broadway and London's West End, including as Norma Desmond in Andrew Lloyd Webber's "Sunset Boulevard."

"Singing a song like 'With One Look,' [from 'Sunset Boulevard'] I feel like I have a voice now that can do justice to that song that I don't think I would have been able to do ten years ago," Linehan said in retrospect.

"Things have changed for me, as well [in life]... I've been blessed in recent years with my family, with my children and my husband. I'm eternally grateful for all the wonderful things," Linehan said about her evolution and giving clues to its effect on her work. "Equally, I've had a lot of tragedy in my life in the last few years. I've lost both of my parents. It's just change. It's like you wake up one day, and you think, 'I'm a full grown-up now. I don't have parents. I'm the parent,'" she added, a thought almost anyone can relate to as life brings change even if not to our voices. "It adds a lot of weight."

"There's a song that I do in this show called 'Tell Me It's Not True,' from [the musical] 'Blood Brothers,' and the song has never meant what it means to me now. There's a line in that, 'Say it's just two clowns that couldn't get their lines right.' I think of my parents, and both of them gone," she said.

"Petula was my mother's idol. That's how I got introduced to Petula Clark, and to her music," she continued. "Taking the show to Paris, it's the biggest concert of my career to date. I think the person that I would most like to have in the audience is my mom. This would have been, I think, probably her proudest moment to see me paying tribute to a singer and a songwriter that she idolized since she was young. A real circle of musical life, which is beautiful."