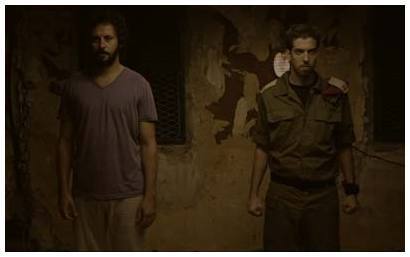 The conflict between Israelis and Palestinians goes on and on, amazingly, distressingly. A comedian I recently heard on a podcast said that, past 50, all Jews suddenly decide that Israel is their top priority, but that hasn't been the case for me (chalk it up to my parents' slipshod efforts to instill the faith in me, or just the fact that I turned atheist in my twenties). So I can only look on at every cinematic illustration -- documentary or narrative -- of the walls and armed checkpoints, the disputed settlements, the cries for genocide from both extremes, and admit my confusion and despair at the intractability of the situation. And I have to wonder if those enmeshed in the hostilities, committed as they may be to their cause, don't in some way feel the cost to their own souls of this war with no end.

Jessica Habie's Mars at Sunrise is based on the experiences of the Palestinian artist Hani Zurob, who was taken into custody by the Israeli military and interrogated and tortured in an unsuccessful attempt to recruit him as an informant. Habie's telling boils the event down primarily to a war of wills between an artist, Khaled (Ali Suliman), and a soldier Eyal (Guy El Hanan), the former steeling himself against his ordeal by deploying his artistic skills with whatever he can lay his hands on during his time in captivity, the latter goaded to further cruelty by his own, thwarted creative ambitions. It's the artist with the brush vs. the wannabe with the gun, and while Habie makes no bones about who's the brutalizer and who's the brutalized, she has the grace to observe how one's monster can rise as a defense against evidence of another's better instincts. 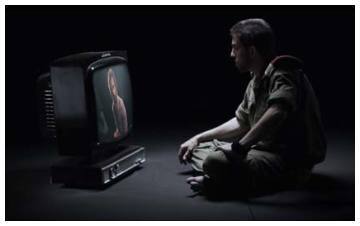 Habie takes an impressionistic approach to telling her story -- fracturing the timeline for both combatants, frequently segueing into poetic interludes that delve into the characters' pyches, and introducing a Jewish-American poet for Khaled to tell his tale to. Her goal, she's said, was to avoid the clichés and stridency a more straightforward telling would engender. It works, although the flashback structure doesn't seem completely necessary, and the fractured timeline at times obscures whether we're watching how the characters wound up the people they are or how their states are evolving in the midst of the present narrative. There's a certain benefit to a spare narrative, not the least being the lack of a comforting aestheticism to intervene between the drama and its impact on the viewer, no drumbeating necessary. Given what we understand of these people, though, the poetry is certainly well motivated, and doesn't seriously undercut the anguish of the situation.

According to Habie, the artist Zurob initially rejected her gambit to make Khaled's tormentor a fellow artist, only to come around once he actually viewed the film. It speaks well of Habie's ability to generate empathy for all involved without failing to acknowledge their culpability in their actions. The complexity goes all the way to a post-flashback encounter between Khaled and Eyal, the gestures of both characters -- and the fact that they could be interpreted several ways -- speaking volumes about Habie's understanding that no one tale is going to resolve what decades of conflict have spawned. The war will go on, until enough people turn to their better wills to make it stop.