For nearly two decades since his graduation from Temple University, Trenton Doyle Hancock has brought to life a cast of subversive cartoonish characters through his work. At the center of his storytelling is both a comedic and epic narrative about a group of fictional creatures called the Mounds. These populate a wildly fantastic landscape that has, evidently, served the artist to cope in a society that struggles to overcome its racial differences. Thus, he sublimates his own fears and demons into those playful characters that have allowed him not only to survive in a racist society but also to succeed in an even more racist world. I am referring, of course, to the world of fine arts. 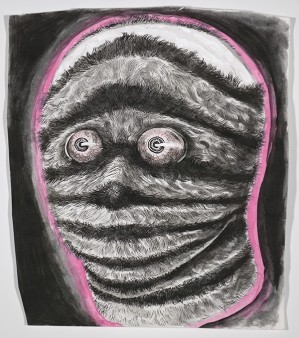 Influenced by the works of Mike Kelley but more directly by Philipino artist Manuel Ocampo, his work is one of the few successful attempts at approaching fine arts from the aesthetics of comics and cartoons. While Hancock's paintings have become widely known, his drawings -- both discrete and monumental -- have not been fully explored before now. "Trenton Doyle Hancock: Skin and Bones, 20 Years of Drawing" is the first in-depth examination of Hancock's extensive body of drawings, collages, and works on paper, and are a great opportunity to delve into the work of an artist where catharsis and social critique seem to collapse into one single aesthetic project. 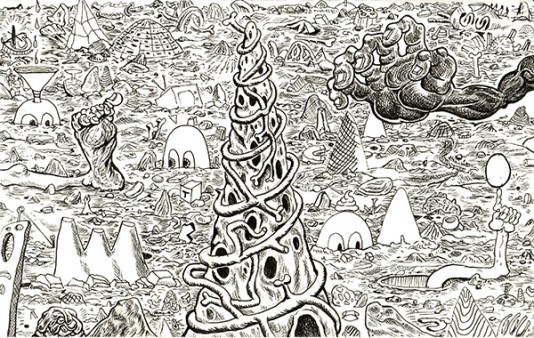 This show opens this Thursday at the Studio Museum in Harlem and is organized by Valerie Cassel Oliver of the Contemporary Arts Museum, Houston, where this same exhibition took place last year.

The works on display create an immersive environment in which the voices inside the artist's head become characters and situations where social issues are dealt with from the subjective point of view of the artist's experience. What is interesting, however, about this exhibition is that it allows the visitor to follow Hancock's personal development since his childhood. His story is that of an African American man who uses the tools of popular culture to make it into the high art world. 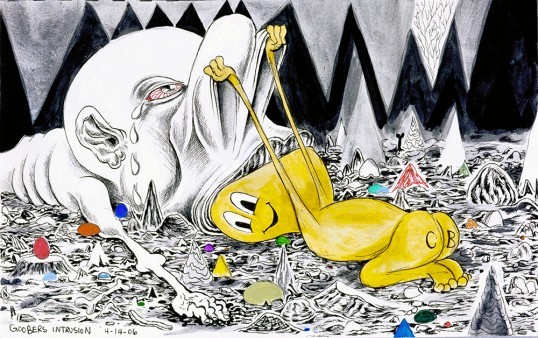 Ephemera such as early childhood drawings and the artist's comic strip that ran in a college newspaper are featured to allow viewers to see the genesis of the artist's mythology. It is in that conflation between the artist's life and the artist's output that the show is a triumph for in 'Skin and Bones' the drawings overcrowd the pictorial space inside and outside the frame. It is this apparent confusion that transforms the exhibition space into a reflection of the artist's insecurities and fears.

The exhibition space becomes a dreamlike stage where the viewers interact with the works of art in the same way that they do with minimalist art. It is in that theatricalization of the relationship between the visitor and the exhibition space that the latter becomes more important than the individual works of art. I think this is something else if we bear in mind that the experience of the museum is the experience of human beings meeting others in a place where no one really interacts. The combination of the deployment of a personal mythology for cathartic reasons and a stage-like theatricalization of the exhibition space for aesthetic purpose brings about a very serious reflection on how popular culture (and, probably, outsider art) can be articulated as fine art.