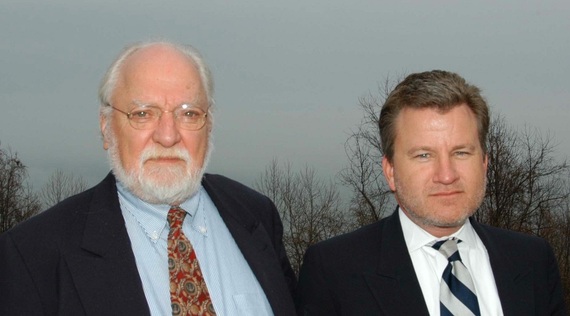 W.E.B. Griffin writes military and detective fiction and has more than 40 novels published under that name. He has published 200 books under 13 different pseudonyms.

He joined the U.S. Army in 1946 and was involved in counter-intelligence. After his army service, he began college, but his studies were cut short in 1951 when he was recalled to serve in the Korean War as a correspondent. At the end of the war, he continued working for the military in a civilian capacity. After his first three novels proved successful, he began writing full-time. In recent years, his son William E. Butterworth IV, previously editor of Boy's Life, has co-authored the books.

The Assassination Option, the second novel in the Clandestine Operations series, features James Cronley, who, at the end of World War II, has been promoted to Chief of the Central Intelligence Directorate in Germany. Intrigue and suspicion abound as not only the Soviets want to know more about this secret spy operation, but so, too, do the Pentagon, and FBI Director, J. Edgar Hoover. In addition, there's a surprising alliance between a former German intelligence officer and of all things, the Israeli Mossad.

You've written more than 200 books, both fiction and non-fiction. What's your writing schedule?
I write every day, basically, until I'm exhausted. I usually begin after having a cup of coffee and breakfast at 7:00 a.m., and work much of the day. I write seven days a week. The beauty of this job is that if I feel like taking time off, I can. I've resisted the temptation not to work, but I take time off when I feel like it. It's beautiful.

How have you remained so amazingly productive? What drives you?
I had three kids who needed new shoes every other week. (Laughter). So, I started writing a lot when I was a young man, and I got in the habit of doing it.

Tell us about the collaboration with your son in recent years.
Billy is an editor. He was at Boy's Life for sixteen years. People don't realize that Boy's Life is the third largest magazine in the country. At one point he said, 'Pop, you're doing a lousy job editing your books. Why don't you let me do something with them?' It just evolved from there. In addition to editing, he got involved with the plotting and characterizations, too. It wasn't a conscious thing, but it evolved very easily into what it's become.

Is there actually hands-on cooperation when you work together?
He's got a condo in St. Petersburg and we work things out over the Internet. I spend a lot of time in Buenos Aires. A manuscript will end up in my e-mail in Buenos Aires, and then it goes back and forth. It's amazing. So, between the two of us, we write the novels. It's a joint effort. As I get older I get sloppier, and Billy is a very good editor. He'll call up and say, 'Hey Pop, you screwed up. The guy's name is Charlie, not Frank.' (Laughter). I don't know if I could do as much now, if not for him. Between us, we're putting out three or four books a year.

Any father-son conflicts?
I get along beautifully with all my kids. Billy and I have an ideal working relationship. No conflicts or problems.

You exemplify the adage, "Write what you know." Do you still do a good deal of military research?
I do. But I'm very lucky. For example, this past Christmas, I was in St. Petersburg, Florida. I met up with an old army buddy, Billy Waugh, the guy who caught Carlos the Jackal. A Special Forces guy and a CIA guy were there, too. We spent two or three hours talking, and I got a great deal of information from them.

Did you take notes?
No. If you take notes, you get hung up. The best thing to do is just listen, remember, and if you forget something, let your brain fill in the blanks.

So, when speaking with people like Billy Waugh, you fill in some of the blanks with your imagination?
Oh, absolutely. But, I have to be very careful not to say anything that shouldn't be said. You know, counter-intelligence sorts of things.

Do you sometimes find your fictional imaginings actually happen in real life?
Yes, and that's very weird. It's surreal. It's happened two or three times when I wrote something fictional, and then it actually happened.

What has made you use so many pseudonyms over the years?
That started when I was writing books for kids. They paid twenty grand and you can't support three kids on that kind of money. I was writing four or five of those a year under different names. Then, a fabulous opportunity came my way. I edited the novel M.A.S.H. written by Richard Hornberger, who wrote it under the pseudonym, Richard Hooker.

I then ghost wrote the twelve sequels to the first M.A.S.H. novel. Richard was the real Hawkeye who wrote about his experiences as a surgeon in Korea. His novel M.A.S.H. became the blockbuster film, and was the basis for the TV series that followed. We made a lot of money with the twelve sequels, and they were tremendous fun to write.

Then, I began writing the nine book Brotherhood of War series. The guy from Putnam called me up and wanted a pen name because my name, William Butterworth, had been on all the M.A.S.H. books. So, I decided on the name Griffin. The griffin is a mythical animal with the loins of a lion and the head of an eagle, which is how colonels think of themselves. So, I picked that name. (Laughter)

After all these years of writing, has anything surprised you about the writing life?
What surprises me is that being a bestselling writer isn't like it's depicted in the movies. I saw a Michael Caine movie where he played a writer. He had a private jet and women were falling at his feet. It's not like that at all. It's a lot of hard work and doesn't pay nearly as well as it's shown in the movies. I don't have a private jet. I take my wife to the grocery store in my GMC. (Laughter)

What do you love most about the writing life?
I love the freedom, the independence. I started writing to make a living, but now that I'm successful, I realize I can do what I want to do. And, I want to write. That's the greatest part about it.

If you could have any five people over for dinner, from any walk of life, living or dead, who would they be?
That's an easy one. My choices would be Thomas Jefferson, Albert Einstein, Clint Eastwood, Gen. Jimmy Doolittle, and Socrates

That's quite a combination of minds and talent.
We've covered the bases, haven't we?

Congratulations on penning The Assassination Option, the second novel in the Clandestine Operations series. It's sure to make the bestseller list.