"The fault, dear Brutus, is not in our stars,
But in ourselves, that we are underlings." 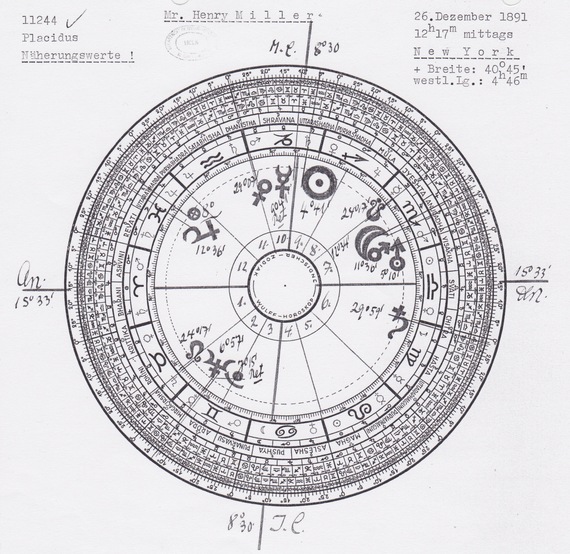 Henry Miller was a devotee of astrology. He employed astrological imagery in his writing for expressive purposes, and he relied on astrology when faced with important decisions in his personal life. Miller viewed astrology metaphorically, as a system of correspondences between the inner world of the psyche and the soul and the outer world of the planets and the stars -- between the microcosm and the macrocosm. And because Miller wished to lead an astrological life marrying his own personal rhythms to the larger rhythms of the universe, he looked to astrology for guidance through personal difficulties.

Miller's interest in astrology as a literary device is evidenced by the titles of two of his most famous books, Tropic of Cancer and Tropic of Capricorn. These titles reference both geographical zones on the planet Earth as well as signs of the zodiac. As he worked on Capricorn in Paris, he wrote to his lover Anaïs Nin explaining the astrological significance behind these books. "For me Cancer means the crab -- the creature which could move in any direction. It is the sign in the zodiac for the poet -- the halfway station in the round of realization. Opposite Cancer in the Zodiac is Capricorn, the house in which I am born, which is religious and represents renaissance in death. Cancer also means for me the disease of civilization, the extreme point of realization along the wrong path⎯hence the necessity to change one's course and begin all over again. Cancer then is the apogee of death in life, as Capricorn is of life in death."

Nin introduced Miller to Conrad Moricand, a famous Swiss astrologer living in Paris. Moricand cast Miller's birth chart, then wrote a lengthy interpretation of it, describing Miller as "an angel surrounded by flames." In 1939, shortly before he left France for a short stay in Greece, Miller read The Astrology of Personality by Dane Rudhyar and was profoundly affected by it, later listing it in The Books in My Life among the one hundred books that had influenced him most. Miller began a correspondence with Rudhyar, whose insights into Miller's dysfunctional relationship with his mother deepened his belief in the validity of astrology as a tool for understanding the self.

Some years later, while Miller was living in Big Sur, California and working on his novel trilogy The Rosy Crucifixion (another title rich in occult symbolism), he received a letter from the astrologer Sydney Omarr, who had noted the frequency of astrological imagery in Miller's books and proposed writing a study of it. "To me you are a symbol of the direct tie between literature and astrology, which first became evident during the Renaissance," Omarr wrote.

Omarr asked Miller for cooperation in writing his study, to be called Henry Miller, His World of Urania. In his forward to the book, Miller wrote:

"What interests me primarily in astrology is its holistic aspect. The man who is whole sees whole, and for him the universe is an ever expanding universe, that is, a universe more infinite to be part of ... Only astrology can reveal this potential reality which is man's kingdom -- or the garden of fulfillment."

Elsewhere in the forward Miller warned against using astrology as a predictive tool:

"It is not to discover what is going to 'happen' to us, it is not to forestall the blows of fate, that we should look to our horoscopes. A chart, when properly read, should enable one to understand the over-all pattern of one's life."

But despite this disclaimer, Miller did turn to astrology to help him cope with stressful periods in his life. In the winter of 1956 Miller traveled from Big Sur to New York to attend his dying mother. Distressed by her stubborn resistance to his efforts to help her, and alarmed by the prospect of having to care for his mentally retarded sister Lauretta, Miller wrote to Omarr wondering when the ordeal would end. Omarr answered that the position of Mercury in the heavens would soon bring relief. Miller's mother died six weeks later and, unable to arrange care for Lauretta in New York, he brought her back with him to Big Sur.

Another critical juncture for Miller occurred in 1961, the year Tropic of Cancer was finally published in the United States. Miller had begun an affair with Renate Gerhardt, a German woman from Hamburg who was translating Nexus. She was a widow in her late thirties with two teenage sons. He wanted to move to Europe to start a new life with her. But he was conflicted about leaving his own two teenage children behind in California. As he drove around Europe looking for a suitable place to settle but never finding it, he became despondent and consulted a woman astrologer in Switzerland for advice where to look. She suggested Portugal, so Miller immediately flew to Lisbon. But when Portugal also disappointed him, Miller nearly had a nervous breakdown and abandoned the idea of making a life with Renate.

Miller's interest in astrology is an important clue to his mission as a writer. For many years he contemplated writing a purely astrological work to be called Draco and the Ecliptic. Omarr explains the significance of Draco:

"For the esoteric astrologer a tremendous idea lay behind the myth of the Dragon, which was called the thirteenth House of the Zodiac. For the Chaldeans the Dragon was the first created being; it was through the Dragon in the sky that man gained admittance to the 'heaven beyond heaven' ... The Dragon which creeps through the fence into Paradise is the same as the sage who liberates himself from the thralls of destiny, the same as Buddha attaining Nirvana."

Miller saw in Draco a symbol of escape from personal history and from human history into the "heaven beyond heaven." That he never wrote the book may signify that Miller never attained the state of human perfection that he sought.

Arthur Hoyle is the author of The Unknown Henry Miller: A Seeker in Big Sur.