Recently, I watched CNN Special Report: Atheists: Inside the World of Non-Believers. I figured it was going to be a serious, in-depth look at atheism. After all, the show has TWO colons in its title. That is serious. While the show was a pretty fair look at atheism, there are some things that just weren't fully discussed. So, I would like to give you my take on being an atheist.

Atheist Agenda - Some religious folks think that atheists have some sort of agenda to take away religion. This is simply not true. Most atheists do not care if people worship God, or Tinkerbell, or cheese, they just want God to stay out of their lives and government. In other words, atheists don't want religion forced on them, and it is in many ways, like:

Blue laws
"In God we trust" on currency
"Under God" in the Pledge of Allegiance.
Swearing on a Bible in court
Jehovah's Witnesses and other pushy religious folks
RFRA laws

Worshipping Satan - The CNN reporter kept mentioning that a lot of people think atheists worship Satan. This is beyond illogical. Atheists do not believe in any supernatural being. So, the devil does not exist to them. If Satan does not exist, he can't be worshipped. Atheists aren't dark and scary. They would just rather have brunch than go to church. Think of them as your non-praying Belgian waffle-eating friends.

No Morals - I have had religious people ask me how I can have morals without God. This is scary because it tells me that the only thing keeping some people from raping and killing is a belief that there is an invisible man in the sky watching them. It's kind of like Santa Claus for grownups. I tend to think more like Katherine Hepburn, who said, "I'm an atheist, and that's it. I believe there's nothing we can know except that we should be kind to each other and do what we can for each other." People without morals are called psychopaths, not atheists.

Angry at God - Now that we have established that atheists do not believe in any supernatural beings, we can probably do away with that whole, "You're just angry at God" argument. Just like you can't worship something you don't believe in, you also can't be angry at something that doesn't exist.

Religious Knowledge - The CNN reporter said that she was shocked to see an atheist pursuing a graduate degree in religion because she couldn't imagine an atheist being comfortable learning about religion. A lot of atheists enjoy reading about all sorts of things, including religion, but they don't do it because they want to be persuaded to believe in God. Some religious folks think that an atheist just needs to go to church and read the Bible to be convinced. The parents of an atheist college student in the documentary referred to their son as a dead man, and regretted not forcing him to go to church more. They believe that would have made a difference. More religious education is not going to make God real for atheists. God is just something that feels fake right from the beginning.

Some Splainin - Most atheists are confused and a little bit angered because the burden of proof seems to fall on them, especially in the USA. Why do people WITHOUT an imaginary friend owe an explanation as to why they don't believe in an invisible supernatural being? This is especially evident by the fact that CNN felt it necessary to create a documentary to look inside the world of non-believers, like they are mystical creatures who must be studied behind glass. It's really simple. Atheists do not believe in God, any god at all. They don't believe in Jesus, Allah, Zeus, Jupiter, or any of the thousands of gods and goddesses. They don't believe because there is no real evidence that gods exist.

I am an atheist. I have been an atheist my whole life, even when I was being forced to attend Baptist church by a family friend. I was still an atheist when I opted to get baptized in college because it's what normal people did. I volunteer at the zoo. I work and take care of my family. I appreciate a good martini. I love Christmas trees and Easter baskets. I am a nice person unless you ring my doorbell and try to sell me something, including religion, or make laws to discriminate against my friends. Then, I'm a bit irritable.

Here is the official Atheist Agenda. :) 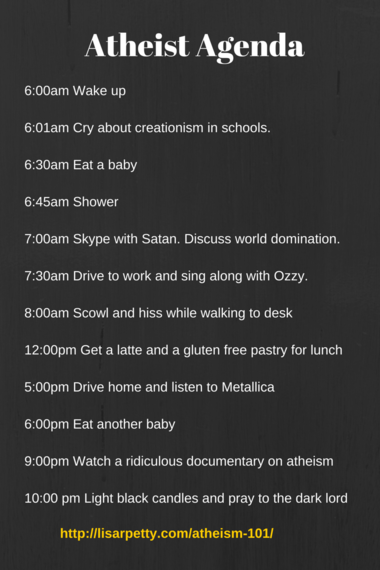 I am a writer, animal lover, educator, mother, wife, and joker.