That's right. If the folks behind a movement called Openly Secular have their way, more and more American atheists will be coming out of their religion-free closets to declare their unbelief to friends, family and coworkers.

And your neighborhood agnostics, humanists, freethinkers and seculars will be joining them.

Nontheists are tired of the discrimination they experience in the U.S., according to the folks at Openly Secular, a campaign organized by a coalition of dozens of secular organization across the country.

In the South, they say, newcomers are commonly greeted with "What church do you go to?" and shunned if the honest answer is "none." 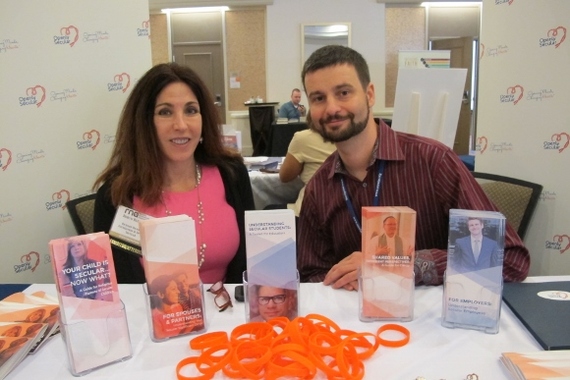 Pitching atheism at a meeting of the Religion Newswriters Association Robyn Blumner, executive director of the Richard Dawkins Foundation, and Todd Stiefel of the Stiefel Freethought Foundation. Photo by Barbara Newhall

A 2014 Pew Research Center poll indicates that the Openly Secular folks might be right about how the American public feels about them. On a scale of one to 100, the pollees gave atheists an average score of 41, just one point above the 40 given to Muslims - the group that received the lowest score of any group. (Jews received the highest score, by the way, with a rating of 63. And America's Catholics and Protestants were a close second with scores of 62 and 61.) 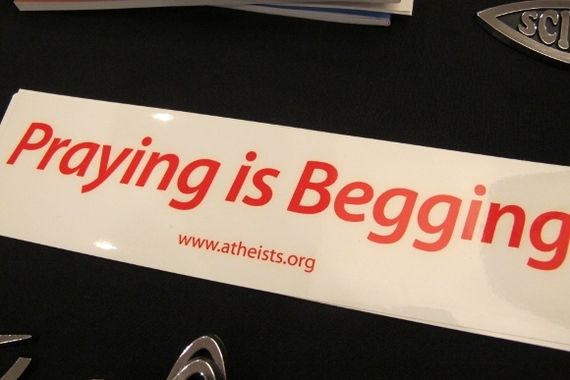 The Openly Secular movement hopes to rectify all this discrimination and marginalization by encouraging atheists, humanists and secular people in general to come out of the closet and make their worldview known to those around them. Being openly instead of secretly secular, it is hoped, will de-stigmatize unbelief and demonstrate that secular people are decent, ethical people.

The secular movement seems to be growing. At the very least, its efforts to get some positive ink from the media are expanding. At last fall's meeting of the Religion Newswriters Association in Atlanta, for example, a half-dozen a-religious organizations along with their press kits and giveaways occupied a large section of the exhibit space. Among them were the American Humanist Association, the Secular Student Alliance, the Center for Inquiry, the Secular Coalition for America, the Stiefel Freethought Foundation, the Richard Dawkins Foundation and, of course, the granddaddy of them all, American Atheists.

One of the fattest press kits handed out came from the Openly Secular campaign. "Non-religious people are treated like second-class citizens," the handout states. They are "often shunned by family and friends. Kids are bullied and even assaulted on the playground; activists receive death threats."

The thinking at Openly Secular is that much of this antipathy could be diffused if more nonreligious folks would take a page from the LGBT movement and come out of the closet -- go public with their thoughts and beliefs. Let their neighbors know that they are just folks -- friendly, concerned citizens.

As for Christopher Hitchens and Richard Dawkins and other religion-dissing atheists who like to slice and dice their opponents, Robyn Blumner of the Richard Dawkins Foundation asserts that Dawkins, for one, is incredibly popular with young non-believers. Students wait in lines for an hour and a half to see Dawkins, she said. "They are as flush with excitement as they would be if he were Lady Gaga."

A version of this story first appeared on BarbaraFalconerNewhall.com, where Barbara riffs on life, books and her rocky spiritual journey. Her new book is "Wrestling with God: Stories of Doubt and Faith."

If you enjoyed this post, you might like "Want to Shock Your Atheist Family? Convert to Christianity" and "The Rise of the 'Nones' -- Young Americans Are Doing Without Church."

They're Atheists. They're Proud. And They've Got a Lot of Cool Bumper Stickers